Tropical Storm Olaf has formed in the Pacific Ocean, 1,485 miles southwest of the southern tip of Baja California. The National Weather Service expects to see Olaf strengthen into a hurricane as it moves west into the Central Pacific. 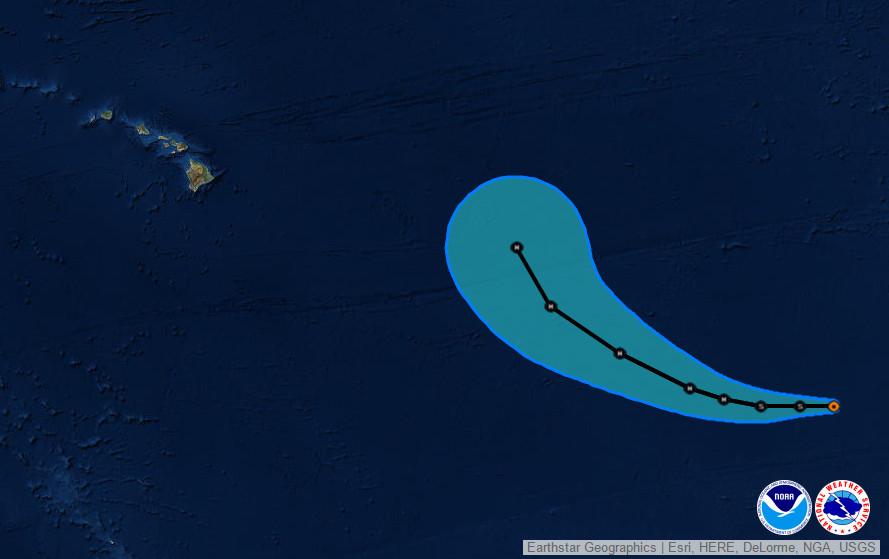 HAWAII ISLAND – Tropical Storm Olaf has formed in the Pacific Ocean, 1,485 miles southwest of the southern tip of Baja California. The National Weather Service expects to see Olaf strengthen into a hurricane as it moves west into the Central Pacific.

Right now, Olaf’s maximum sustained winds have increased to near 40 mph. Additional strengthening is forecast during the next 48 hours, forecasters say, and Olaf could become a hurricane by Sunday.

Here is what the National Hurricane Center said at 5 p.m. HST:

“The cloud pattern of Tropical Depression Nineteen-E has continued to become better organized during the past several hours. There is now a persistent convective area near the center and ragged outer bands in the western semicircle. Satellite intensity estimates have increased to 45 kt from SAB and 35 kt from TAFB. In addition, Rapidscat data from the International Space Station showed an area of 30-35 kt winds just north of the central convection. Based on these data, the depression is upgraded to Tropical Storm Olaf with 35 kt winds.

The initial motion estimate is now 270/12. Olaf is currently being steered by a mid-level subtropical ridge. The dynamical models forecast the ridge to persist but weaken during the next 72-96 hours due to the influence of a strong deep-layer trough forecast to develop over the southwestern United States. This evolution should cause Olaf to continue westward with a decrease in forward speed during the first 36-48 hours, followed by a west-northwestward motion from 48-96 hours. After that time, the ridge is forecast to break to the east of the Hawaiian Islands, which should allow the storm to turn more northward. The track guidance is generally in good agreement with this scenario, with the ECMWF, GFS, and the various consensus models rather tightly clustered. The new forecast track is similar to the previous track through 72 hours, then is nudged slightly westward thereafter. The new track is close to the model consensus.

Olaf is expected to remain in an environment of good moisture, light shear, and warm sea surface temperatures for at least the next three days, so there is no obvious reason it should not strengthen. On one side of the guidance, the LGEM forecasts Olaf to become a major hurricane in 72 hours, and the Rapid Intensification Index of the SHIPS model shows a 30-35 percent chance of 30 kt of strengthening during the next 24 hours. On the other side, the GFDL and HWRF forecast a much slower rate of intensification. The new intensity forecast is nudged upward from the previous forecast based on current trends and is a compromise between the SHIPS model and the Florida State Superensemble. As stated in the previous advisory, given the very conducive large-scale environment, it would not be surprising to see more strengthening than is currently forecast.”National Weather Service at 2:37 p.m. HST