Geologic mapping is considered by some to be “old school” science. By current standards, there’s certainly nothing glitzy or high tech about walking miles across seemingly barren rock or through dense forests to map lava flows. An HVO field geologist must make his way through dense forest to map the full extent of an old Mauna Loa lava flow. USGS photo.

Volcano Watch is a weekly article and activity update written by scientists at the U.S. Geological Survey`s Hawaiian Volcano Observatory

HAWAII VOLCANOES NATIONAL PARK – Geologic mapping is considered by some to be “old school” science. By current standards, there’s certainly nothing glitzy or high tech about walking miles across seemingly barren rock or through dense forests to map lava flows.

The motivation for mapping “old” lava flows is based on the geologic principle of Uniformitarianism, which fundamentally says that the key to understanding the future is to look at the past. By definition, Uniformitarianism is the theory that natural processes behave more or less the same today as they have throughout the past, and will continue to do so in the future.

As an example, if we are assigned the task of figuring out future threats posed by an unknown or poorly understood volcano, we start by examining its eruptive products or deposits. By looking at these old deposits, we can establish if the volcano is predominantly effusive (eruptions characterized by lava flows) or explosive in character. Then, by systematically mapping the spatial distribution of the deposits and age-dating them through various techniques, we can identify the areas affected by volcanic activity and how frequently it takes place.

Our mapping tools are basic: a hand lens, notebook, topographic map, hammer, and compass (or handheld GPS for some geologists!). Our ‘computer’ sits on our shoulders: head, brain, and eyes. Field geologists must also be in tune with the natural environment in order to derive clues on the character, origin, and age of the substrate. These clues can include subtle changes in vegetation, ground surface roughness, rock color, and other characteristics.

Geologic mapping requires extensive field work in which we walk the contacts between old lava flows to distinguish individual flow units and intraflow boundaries, including gradational transitions between pāhoehoe and ‘a‘ā flows. This field work relies on aerial imagery and paper topographic maps to plot the flows. 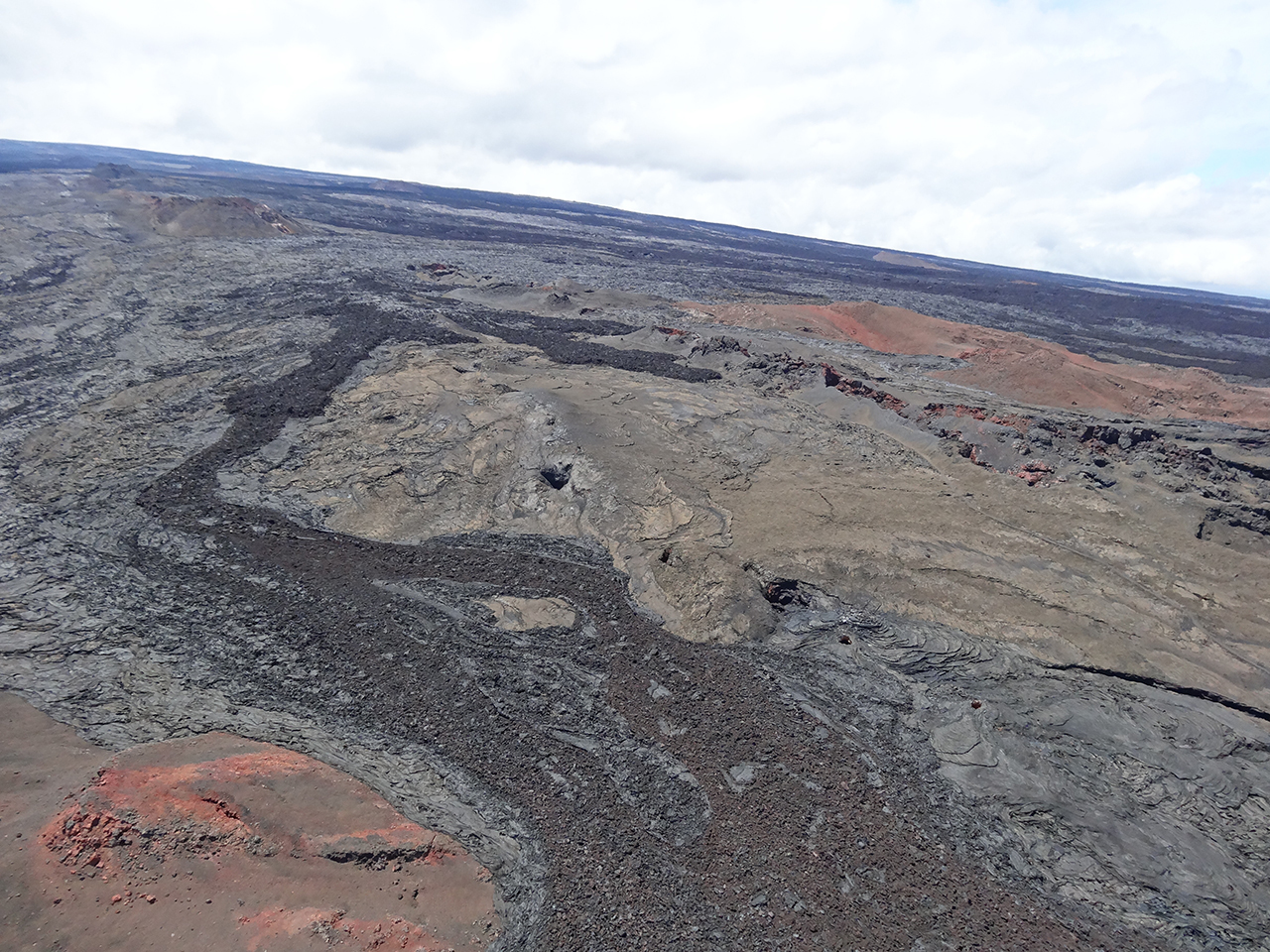 Where terrain or jungle obscures the contacts between different lava flows, we create a grid pattern of transects to examine sparse outcrops of rock. The resulting boundaries between distinct lava flows are then extrapolated between transects from aerial photo interpretation and geological and botanical inferences.

Reliably correlating discontinuous lava flow exposures through heavily vegetated areas is a major challenge on volcanoes—like those in Hawaii—that consist entirely of compositionally similar basalt. To characterize lava flows in the field we use several criteria, including the type, size, morphology, and abundance of minerals in the rock, in addition to groundmass texture, vesicle shapes and linings, and flow morphology.

Distinguishing lava flows can also involve laboratory analyses in which we employ various techniques, such as paleomagnetic pole directions, rock chemistry, and petrography. Paleomagnetic poles—the direction of the earth’s magnetic field captured by crystallizing minerals within the lava—are indispensable tools for correlating flows over large distances and, especially, through dense jungle.

Prehistoric lava flows and tephra deposits are divided into age groups by several methods. For some deposits, we use radiocarbon dating of carbonized organic material recovered from beneath the lava. For other flows, we assign relative ages based on weathering or alteration of the rock, thickness of soil and tephra accumulation, stratigraphic relationships of adjoining dated flows, and vegetation cover.

Surface color is an indirect indicator of age. Young lava flows are initially black and often glassy. As the rock is exposed to sunlight, it becomes increasingly weathered, with its color changing from shiny black to dull black, then progressing to gray, brown, tan, orange, and, finally, reddish hues. The longer the rock weathers, the greater its color progression. We use this color scheme to tentatively classify ages of eruptive units within limited areas. But the utility of this technique is influenced by elevation, rainfall, and shielding by forest and tephra deposits.

Sleuthing out the eruptive history of a volcano is challenging, time consuming, and tedious. But there’s no better way to figure out a volcano’s future behavior than to examine its past—and geologic mapping shows us the way!