Congresswoman tells Ige to deploy State resources, including the National Guard, to assist with mosquito abatement, public information, clearing, and providing completely free testing for those with suspected symptoms of the disease. 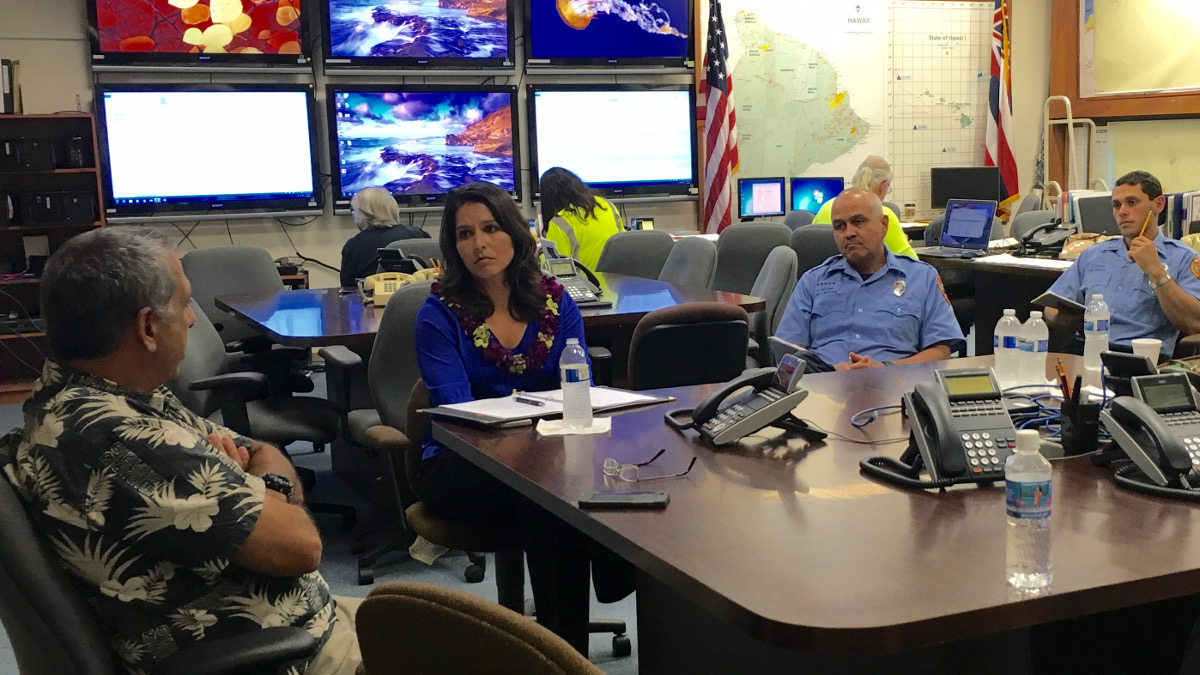 On Friday, the U.S. Congresswoman – who represents the second congressional district that includes Hawaii Island – called on fellow Democrat Governor David Ige to also “deploy State resources, including the National Guard, to assist with mosquito abatement, public information, clearing, and providing completely free testing for those with suspected symptoms of this incurable disease.”

In a media release, the office of Rep. Gabbard said the Congresswoman’s request was made in speaking with Governor Ige and by written correspondence.

“The dengue fever outbreak on the Big Island continues to worsen. We cannot afford to wait any longer for the aggressive action necessary to combat the spread of this serious disease. An emergency proclamation from the Governor is long overdue,” said Congresswoman Gabbard in the media release. “There have already been 242 confirmed cases of Dengue Fever on Hawaiʻi Island, creating a public health emergency affecting our residents and visitors, and Hawaii Island’s economy. They deserve our state’s full attention and resources to do what it takes to put an end to this outbreak, and prevent it from becoming endemic and spreading to other parts of the island and state.”

Rep. Gabbard is also calling for the following action items to be addressed immediately:

1. Completely free and accessible testing for those who suspect they have symptoms of Dengue Fever. While the cost of the test may be free, residents and visitors are still charged for visits to a physician, nurse, or clinic in order for their blood to be drawn. This could easily be solved by ensuring there are free access points island-wide, and by deploying state or National Guard medical personnel as a mobile testing unit that can travel to both populated and remote locations across the island, draw blood, and get samples to the lab for expedited results.

2. Allocate resources to the Department of Health for development and execution of a comprehensive public information and public engagement campaign with quality review measures. Current “Fight the Bite” efforts fall far short of providing residents and visitors with the information they need.

3. Provide a full-time entomologist on Hawaiʻi Island dedicated to eradication, reduction, and prevention of further spread of the Dengue virus.

5. Provide free supply and distribution of Ovitraps throughout the community to empower local residents to help prevent the spread of the Aedes aegypti mosquito. World Health Organization report studies have shown that population densities can be reduced below disease-transmission thresholds with sufficiently large numbers of frequently serviced traps.

6. Appoint a Dengue Czar who can act as the coordinator of efforts with all parties within the state, county, federal, private sector, and community to ensure the objectives are being met.

Rep. Gabbard was on Hawaii Island last week. She met with Hawaii County Civil Defense about the dengue outbreak. This week, Kailua-Kona joined South Kona as a region of “high risk” for catching dengue fever from an infected mosquito.

Today, the Hawaii Department of Health identified 1 new case of dengue fever, bringing the total number of cases counted since the outbreak began in September to 242. As many as 2 of the confirmed cases to date are potentially infectious to mosquitoes, the state says.

Gabbard’s news release explored some alternative perspectives on the outbreak:

On October 21, 2015 the Dengue exposure rate on Hawaiʻi Island was 1 in 185,079. As of today, 1 out of every 849 residents and approximately 3 out of every 50,000 visitors has contracted dengue fever. This constitutes an average infection rate of 67 residents and 7 visitors every month since this outbreak began. Additionally, the same mosquito that carries Dengue Fever is also a carrier of the Zika virus, which is “spreading explosively” according to UN health officials, who are currently considering declaring an international health emergency.

More than a third of the world’s population live in areas at risk for infection from the Dengue virus, which is a leading cause of illness and death in the tropics and subtropics. As many as 400 million people are infected annually. Rep. Tulsi Gabbard has been meeting with state leaders, Hawaiʻi County officials and Civil Defense, military personnel, experts in the private sector and at the U.S. Centers for Disease Control and Prevention, and listening to concerned citizens of the Big Island, working to protect the people of Hawaiʻi from Dengue Fever, a debilitating disease that has no vaccine, treatment, or cure, so that the Aloha State does not remain a part of this worldwide epidemic.