The number of trees being killed by Rapid Ohia Death has more than doubled since 2014, increasing from 15,000 acres to 34,000 acres on the Big Island. 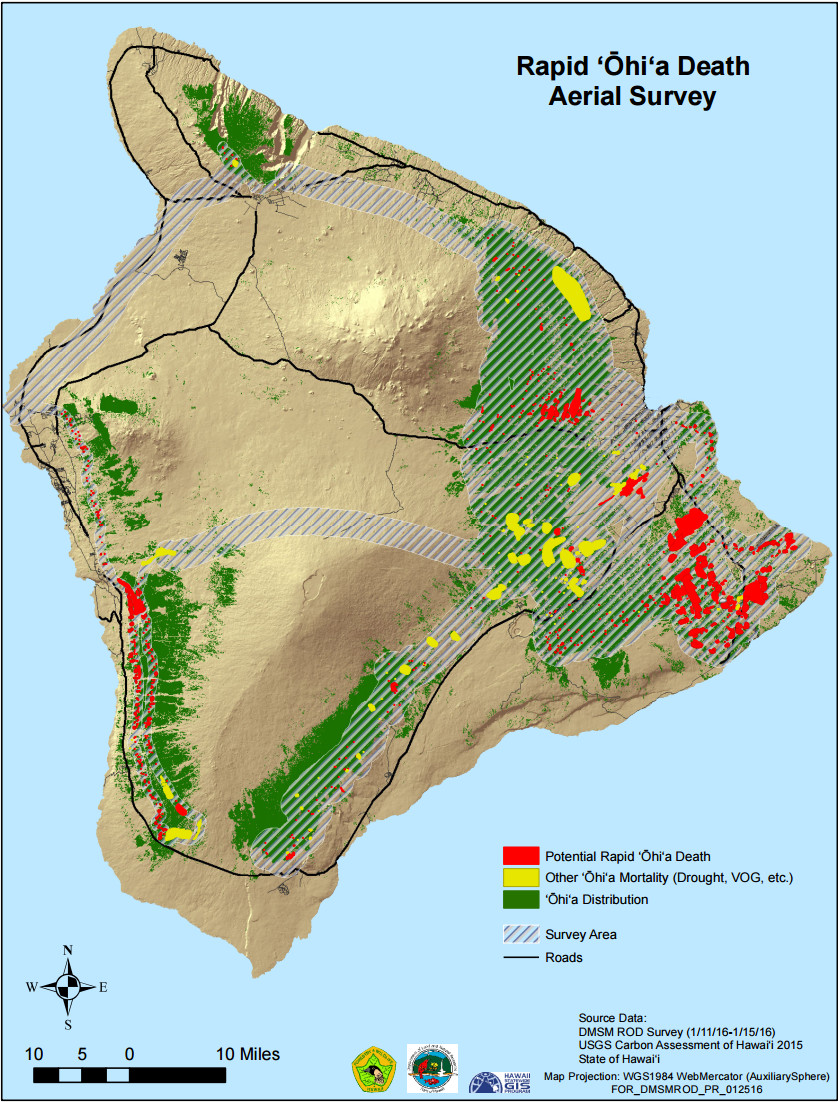 HAWAII ISLAND – The spread of Rapid ‘Ōhi‘a Death on Hawaii Island is much greater than previously thought. State officials say an aerial survey conducted in January revealed the number of ohia trees infected by the newly identified disease has more than doubled since 2014, increasing from 15,000 acres to 34,000 acres on the Big Island.

A media release was issued by the State Department of Land and Natural Resources on Friday, along with the map seen above.

Recent aerial surveys of 810,000 acres of Hawaii Island forests showed that a fungal infestation of ohia trees is much greater than earlier thought. Using a helicopter and specializedsurvey equipment, surveyors from a collaboration of state, county and federal agencies flew January 11 – 15, 2016. Satellite imagery of ohia forests in 2014 resulted in an estimate of 15,000 acres infected by this newly identified disease. The latest survey, pending ground verification, estimates the infection has now spread to some 34,000 acres of the ohia forest on the Big Island.

Philipp La Haela Walter, the State Resource and Survey Forester for the DLNR Division of Forestry and Wildlife (DOFAW) said, “We used two surveyors at a time and flew a total of 8 ½ hours over state, federal and private lands covering about two-thirds of the Big Islands’s ohia forests. Our next steps are to cover the rest of the ohia forests with follow-up flights and to ground-truth the aerial operation. One of our priorities will be to double-check the Kohala area, where Rapid Ohia Death may have been detected for the first time by our aerial survey.”

A team of experts from DLNR/DOFAW, the U.S. Department of Agriculture (USDA) Forest Service, the Big Island Invasive Species Committee and the National Park Service/Hawaii Volcanoes National Park conducted the aerial survey. The University of Hawaii Cooperative Extension Service and the USDA Agricultural Research Service assisted with planning. In 2014 USDA researchers identified the pathogen that causes the disease.

Dr. Flint Hughes, with the USDA Forest Service commented, “Unfortunately Rapid Ohia Death is spreading much quicker than we had hoped. The aerial surveyors noted ohia trees with no leaves or brown leaves, likely impacted by the disease; as well as ohia trees which have been dead for a longer time and those that have been affected by either drought or VOG. It’s important that we differentiate the causes of tree deaths and continue to carefully and closely monitor the spread of Rapid Ohia Death to aid in reducing its spread on Hawaii Island and around the state.”

Ohia forests cover approximately 865,000 acres of land across the state and are considered the primary species providing habitat for countless plants, animals and invertebrates. These forests protect watersheds that provide significant agriculture and drinking water across the state.

“It’s sad but not unexpected that we have a confirmed case of Rapid Ohia Death in Hawai‘i Volcanoes National Park,” said Park Superintendent Cindy Orlando. “We are very concerned about the impacts to our cherished ohia that thrives throughout the park, and we will continue to implement the stringent measures developed by our interagency partners to prevent the spread of this devastating disease. We will also continue to sample trees throughout the park,” Orlando said.

Dr. J.B. Friday, the extension forester with the UH College of Tropical Agriculture & Human Resources Cooperative Extension Service explained, “We know that the state Department of Agriculture’s moratorium on the transport and shipment of ohia plants and parts is having a positive effect on curbing the spread. It’s impossible to determine whether the ban on ohia shipping is 100% effective and that’s why we are trying to get the word out to all forest users, nurseries, and lei makers that Rapid Ohia Death is fast killing what is considered one of the most important forest trees in Hawaii.”

Research into treatments for the particular fungus that causes Rapid Ohia Death continues at the USDA Agricultural Research Service lab in Hilo. Investigation into how it spreads is also being conducted with potential culprits being: insects, underground via roots, on small wood or dust particles, on clothing and shoes, and possibly on animals. Ultimately scientists hope that by identifying what is spreading the fungus they’ll be able to mitigate its devastating impacts.