The earthquake was widely felt on the Big Island and no damaging tsunami was generated, scientists say. 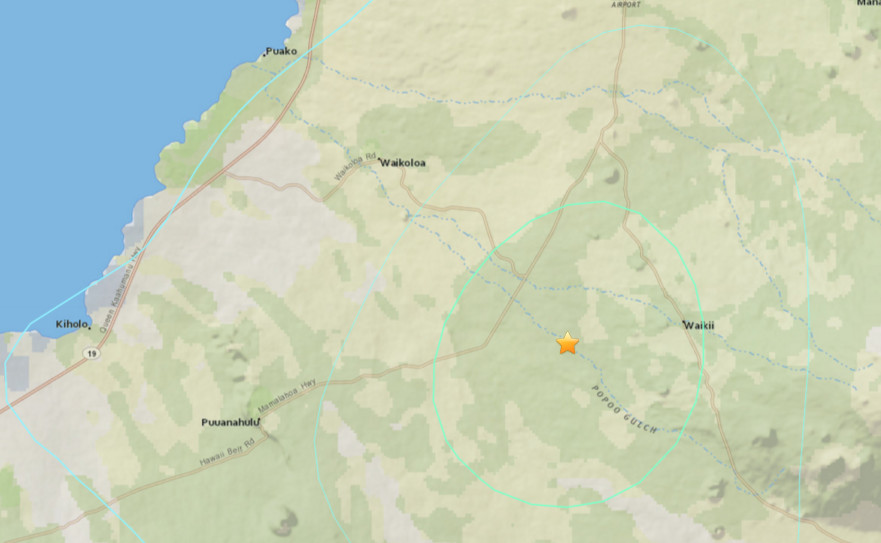 Insert taken from the USGS interactive shake map showing the location of this morning’s earthquake.

Here is the news release that was just issued by the USGS Hawaiian Volcano Observatory:

The U.S. Geological Survey’s Hawaiian Volcano Observatory (HVO) recorded a magnitude-4.6 earthquake located beneath the Island of Hawaiʻi on Sunday, March 20, at 6:43 a.m., HST. The Pacific Tsunami Warning Center has determined that no damaging tsunami was generated.

The earthquake was widely felt on the Island of Hawaiʻi. The USGS “Did you feel it?” Web site received more than 480 felt reports within an hour of the earthquake. Most of the felt reports were from the Islands of Hawaiʻi and Maui, with a few reports from Oʻahu, over 250 km (155 mi) from the epicenter. Moderate shaking (Intensity V) has been reported. At these shaking intensities, damage to buildings or structures is not expected.

As of 8:00 a.m., HST, no aftershocks of the magnitude-4.6 earthquake have been recorded.

Over the past 25 years, there have been 4 earthquakes with magnitudes greater than 4.0 and at depths greater than 20 km (12 mi) beneath the northern half of Hawaiʻi Island, including today’s event. Deep earthquakes in this region are most likely caused by structural adjustments within the Earth’s crust due to the weight of the overlying volcanoes.

Adjustments beneath the northern half of Hawai’i Island during past similar events, such as in March 2010, have produced a flurry of earthquakes, with many small aftershocks occurring for days after the main quake. Given this history, it is possible that additional small earthquakes may be recorded in the coming days.

According to HVO Scientist-in-Charge Christina Neal the earthquake had no apparent effect on Kīlauea Volcano’s ongoing eruptions. “HVO monitoring networks have not detected any significant changes in activity at the summit or along the rift zones of Kīlauea resulting from the earthquake.”

For information on recent earthquakes in Hawaii and eruption updates, visit the Hawaiian Volcano Observatory website at hvo.wr.usgs.gov.