KA'U - The perplexing geological features on southeastern flank of Mauna Loa are a mystery no more, the USGS Hawaiian Volcano Observatory writes. 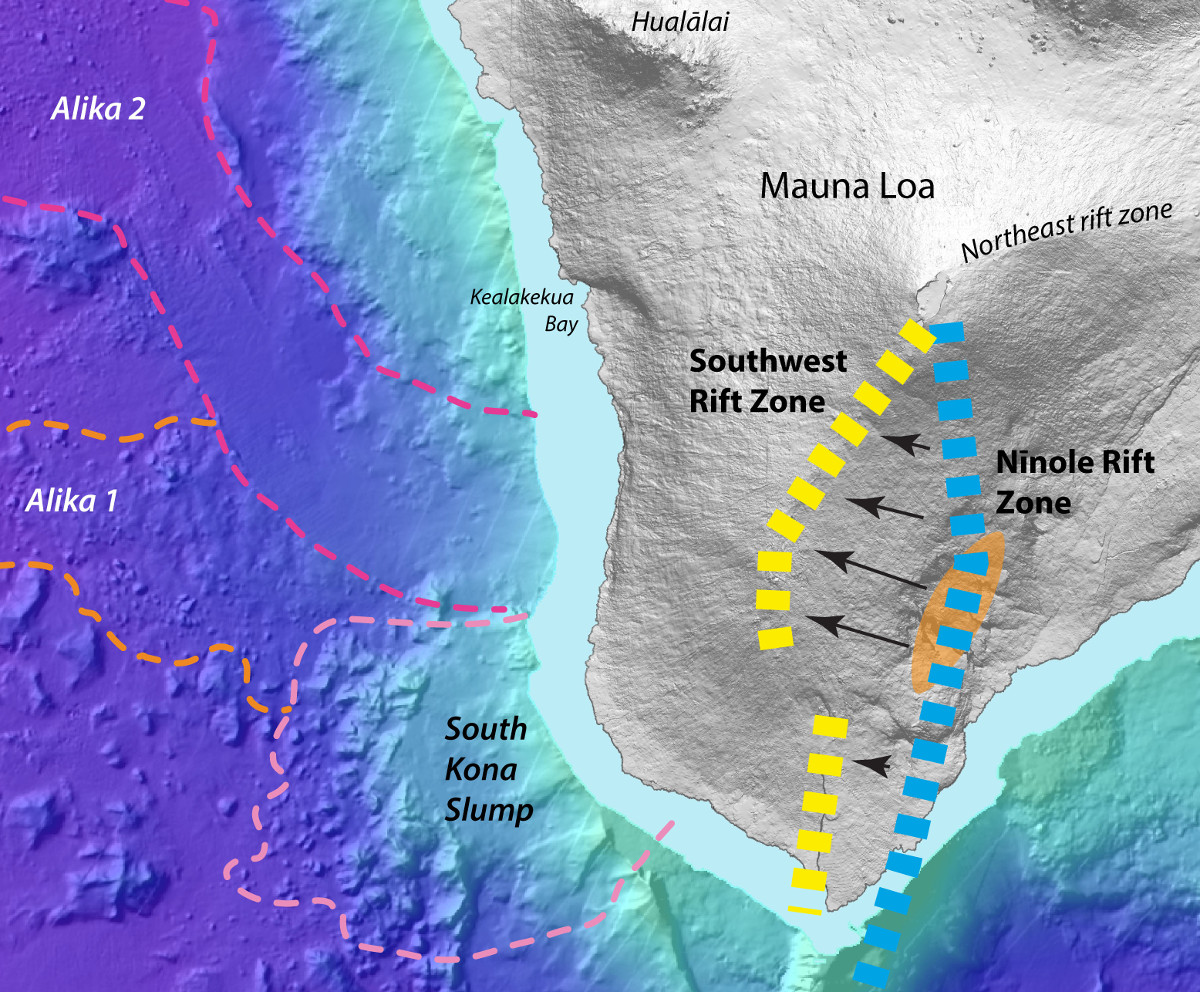 The origin of the Ninole Hills (location shown with orange oval) on the southeastern flank of Mauna Loa is believed to be a failed volcanic rift. The suggested location of this rift is shown with a blue dashed line. Black arrows show one possibility for the westward migration of the Ninole Hills rift to the location of Mauna Loa’s current Southwest Rift Zone (yellow dashed line). The South Kona Slump and Alika-1 and Alika-2 landslides are shown off the west coast of the island. (USGS graphic.)

KAʻU, Hawaii – Scientists believe they have solved the mystery of the landmark Nīnole Hills in the district of Kaʻū. The findings are the subject of the recent Volcano Watch article written by the USGS Hawaiian Volcano Observatory.

In previous Volcano Watch articles, we addressed the origin of the Nīnole Hills on the southeastern flank of Mauna Loa. These hills are a prominent group of flat-topped ridges towering over the nearby Punaluu Beach Park.

For a long time, geologists were perplexed about the formation of the Nīnole Hills and what they represented. The steep sides of the heavily vegetated hills are cut with canyons caused by thousands of years of erosion. Through age-dating of the rocks, the hills were estimated to be approximately 125,000 years old.

Several theories have been put forward to explain the formation of the Nīnole Hills.

According to one, they are the remnants of an older summit of Mauna Loa or its predecessor volcano, Mohokea. In another theory, faulting and landslides are thought to have formed the hills.

Recent studies have proposed hypotheses about the Nīnole Hills once being the site of active volcanism. Based on regional gravity data, one study suggested the existence of a previously unrecognized rift zone extending south of Mauna Loa’s summit toward the hills. Seismic studies suggested that the Nīnole Hills might be a failed rift zone, extending from Mauna Loa’s summit, through the hills, and past the coastline toward Pu‘u‘omahana (Green Sands).

In 2013, USGS scientists and colleagues from academia embarked on a project using microgravity surveys to understand the origin of the Nīnole Hills and to distinguish among competing hypotheses. We chose microgravity because each of the proposed mechanisms for the formation of the Nīnole Hills should produce distinct gravitational signatures due to differences in subsurface structure and/or modification.

Measuring gravity helps scientists understand the types of rocks that might underlie the area. Using a device called a gravimeter, scientists can measure the amount of gravitational pull on a certain area.

Gravitational pull varies depending upon location on the Earth’s surface, as well as the types of rock that make up the area. Lava rocks—for example, those from flows near Kalapana—are low-density and, thus, have lower gravity values. The rift zones and summits of volcanoes contain denser rocks due to repeated intrusions that result in magma cooling below ground, so they have a higher gravity signature.

With the microgravity survey, we found an elongate, northeast-to-southwest positive, or high, gravity anomaly in the region of the hills. If the Nīnole Hills represent slump blocks and landslide scarps, they should generate a gravitational low, because lava flows and faulted surfaces are characteristically low-density. Therefore, this hypothesis is not consistent with the data.

If the Nīnole Hills are the location of the summit area of an older volcano, the anticipated gravity signal would be circular and centered above a dense intrusive complex. But the microgravity data instead show an elongate intrusive complex.

The Nīnole Hills and Mauna Loa lava flows show no appreciable difference in chemical composition. So, the possibility that the Nīnole Hills are a separate and different volcano is ruled out.

What does the geology of the hills tell us about their origin? During the course of recent geologic mapping, we noted several north-trending dikes. These dikes—vertical feeders of magma from the subsurface storage reservoir to the surface—were exposed in road cuts on the flanks of several of the Nīnole Hills.

Research on other Hawaiian volcanoes shows that the number of dikes drops rapidly with increasing distance from the rift zones. The presence of dikes in the Nīnole Hills and the elongate gravitational high, are both consistent with the notion that they were once part of a rift zone.

If the Nīnole Hills do represent an old rift zone, why was it abandoned? Spreading due to gravitational settling, faulting, and landsides could be the cause.

Several debris flows and landslides—the South Kona Slump, and the ‘Ālika-1 and ‘Ālika-2 landslides—exist on the west coast of the Island of Hawai‘i. The ‘Ālika-2 slide, which is approximately 127,000 years old and comprises the Kealakekua region of West Hawai‘i, was contemporaneous with Nīnole Hills activity.

Putting all of this together, we conclude that the Nīnole Hills are a failed rift, and that mass-wasting events on Mauna Loa’s western flank most likely caused the abandonment of the rift, leading to the westward migration of Mauna Loa’s present Southwest Rift Zone.