KUKUIHAELE, Hawaii – Six plaintiffs, including the Kukuihaele Neighborhood Association, are taking the County of Hawaii to court over plans to develope a baseball field on a community park.

The plaintiffs say the $5 to $7 million project – which includes a regulation Little League baseball park, bleachers, new basketball court, improved parking, pavilion and comfort station – is “too elaborate for Kukuihaele, which has a population under 350.”

The plaintiffs allege that the Draft and Final Environmental Assessments for a ball-park project were insufficient and that the determination – a Finding Of No Significant Impact, or FONSI – is wrong.

“The impact will be huge,” said plaintiff David Allen in a media release. “Department of Water has said there’s not enough water for the project, and they’ve made no adequate assessment of traffic, other than to say that traffic will increase.”

Neighbors are also concerned about the impact the project will have on traffic. A narrow road currently leads off the highway to the park. “Cars already go too fast,” said Miequel White, who posted a giant sign that reads “SLOW DOWN” in front of her family home. “If we get the softball leagues coming and going, it will be really scary.”

In February, the Kukuihaele Neighborhood Association says they collected 82 petitions from 64 households within the community. The KNA says 79 wanted the construction bids withdrawn in order to come up with a park design that better served the community, three did not, and 10 abstained.

The final EA, published in March, tries to address some of the concerns. “It is noted that a number of commenters opposed restoring the ballfield, primarily because it would subtract from the available space for passive activities and gathering, but also because of traffic concerns and what they judge to be a lack of demand,” the document states. “A smaller number opposed fencing for visual and access reasons. A few commenters opposed paved parking, a relocated basketball court, use of the park for recreation rather than traditional farming and the removal of fruit and ornamental trees and the planting of koa and Alexander palm trees. Others were concerned with air quality, noise and light. Some residents said that the proposed plan did not reflect the needs of the current residents of Kukuihaele. It should also be noted that a number of commenters supported most or all of the proposed features.”

“After consideration of comments,” the document concludes, “P&R decided that the essential design proposed in the Draft EA truly did best meet the island’s needs.” 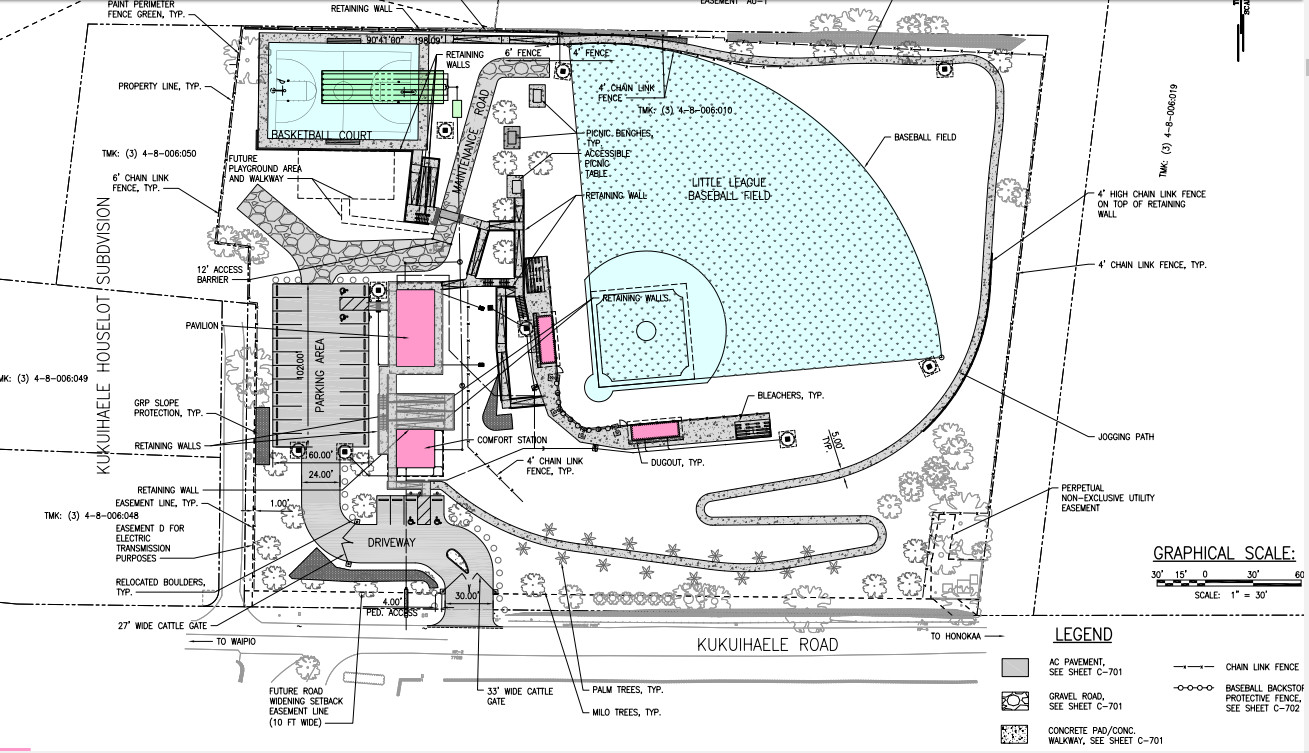 The county’s Kukuihaele plan as it appears in the final EA document.

The EA states there is “considerable demand for ballfield space throughout the County by Little League and kupuna softball for both league games and pickup practices with varying numbers of players. P&R will attempt to accommodate the occasional larger gatherings through a permit system, as it does at least every weekend for other parks in the County system. Although the space available may be reduced from what was formerly available, the addition of a pavilion with restrooms will improve the general experience at the park.”

In the final EA, parks and recreation added some new features to address concerns. The plan now “accommodates the future development of a children’s playground” at the park by designed retaining walls and grading to extend the useable amount of park land. Also, the proposed 6-foot high park perimeter chain link fence at the north and east boundaries of the park was reduced to 4 feet.

Those changes were not what the plaintiffs were looking for, according to KNA secretary Koohan Paik. “This community has asked for park improvements for decades,” she explained in a release. “But we want facilities that include input from the people who live here.”

“We have sent letters, conducted surveys, made phone calls, held meetings, and even sent them our own designs,” said KNA President Colleen Lawrence. “They refused to hear our concerns, so we are forced to go to court.”

Plaintiffs also say the County “denied the existence of any archaeological or historic sites in the area, despite an old Hawaiian cemetery located across the street from the proposed construction site, only 10 feet from the edge of a road that may need to be widened to accommodate increased traffic.”

The KNA media release says the Sierra Club has endorsed the lawsuit. “Sierra Club has been fully apprised of the Kukuihaele Neighborhood Associationʻs concerns for open green space, community-scale recreational opportunities and the shortfalls in environmental compliance,” said Nelson Ho, Chair of the Sierra Club’s Moku Loa Group, in the media release. “Our members are participating in this challenge, in meetings, and now in the litigation. We hope to achieve a community-desired level of development.”

The Hawaii County website reports Isemoto Contracting Co Ltd was awarded the job on April 4. The contract amount is $5,010,320.