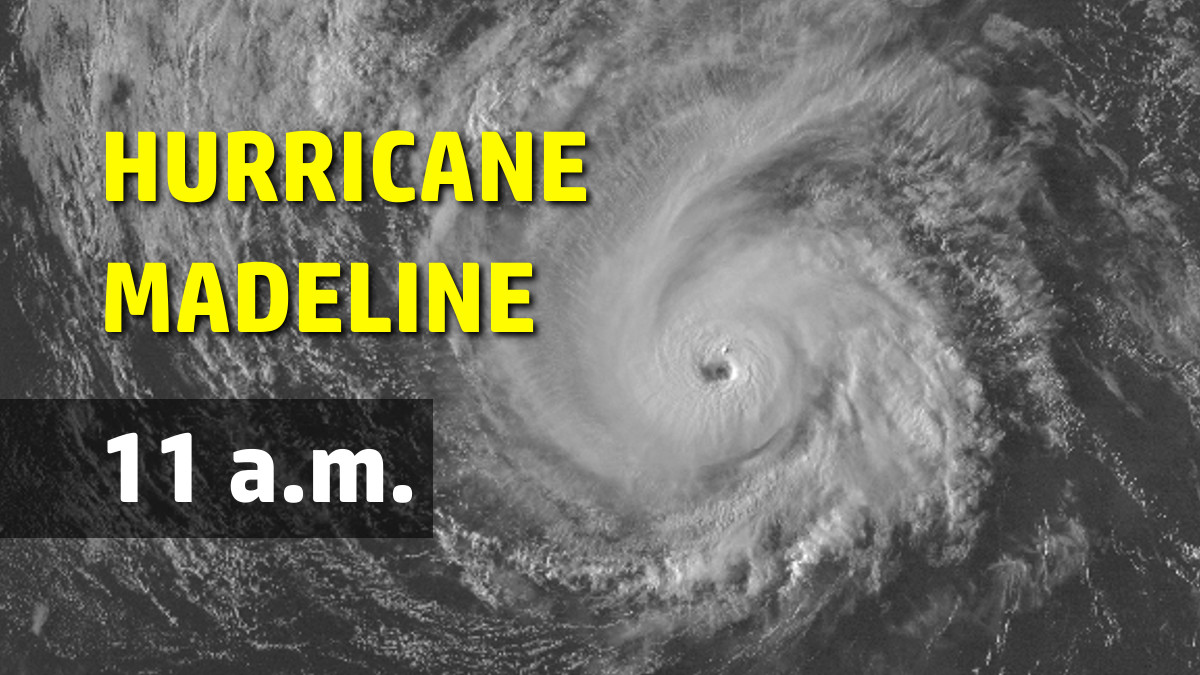 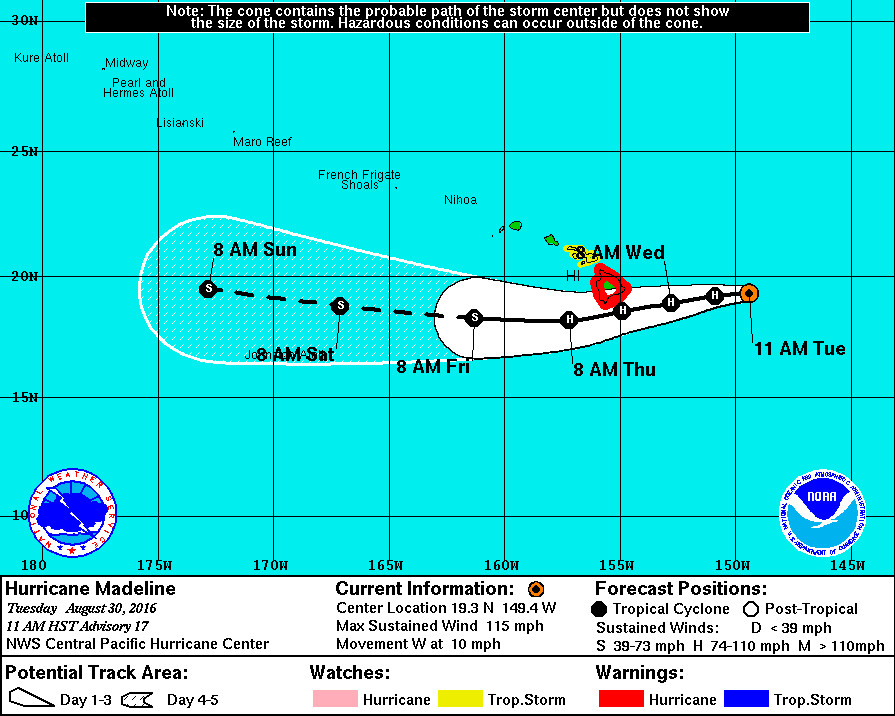 HAWAII ISLAND – A Hurricane Warning has been issued for the Big Island of Hawaii, as Hurricane Madeline is 370 miles east of Hilo and still moving west at 10 mph.

A Hurricane Warning means that hurricane conditions are expected within the warning area within the next 36 hours. “Preparations to protect life and property should be rushed to completion,” the National Weather Service said. Hawaii Island was previously under a Hurricane Watch, as well as a Tropical Storm Warning.

Maximum sustained winds are near 115 mph with higher gusts, making Madeline is a category 3 hurricane on the Saffir-Simpson Hurricane Wind Scale.

“An Air Force Reconnaissance aircraft has made several helpful passes through the hurricane this morning,” forecasters say. “Given the minimum pressure reports from the aircraft and the range of the data, the current intensity is lowered to 100 kt.”

“Although it will be weakening,” the National Weather Service says, “Madeline is expected to remain a dangerous hurricane as it passes near the Big Island of Hawaii late Wednesday into early Thursday.”

Madeline is moving westward along the southern edge of a low to mid level ridge, while a shallow upper level trough continues to dig toward the hurricane from the northwest. The ridge will keep Madeline on a westward-moving track today, followed by a gradual turn toward the west-southwest tonight and Wednesday as the ridge to the north builds and the upper level trough imparts northerly winds in the high levels of the cyclone. This track will take the center of Madeline dangerously close to the Big Island of Hawaii late Wednesday and Thursday. Given its close approach and uncertainty in the track forecast, a Hurricane Warning has been issued for the Big Island of Hawaii.

Hurricane conditions are expected over Hawaii County on Wednesday into early Thursday.

Madeline will generate high surf that will build across the Hawaiian Islands today and tonight, possibly becoming damaging along east facing shorelines of Hawaii County and eastern portions of the Island of Maui on Wednesday and Thursday.

Heavy rains associated with Madeline may reach Hawaii County on Wednesday, forecasters say, and may impact other Hawaiian Islands later Wednesday through Thursday. Madeline is expected to produce total rain accumulations of 5 to 10 inches, with isolated maximum amounts near 15 inches, across the Big Island, especially over windward portions. This rainfall may lead to dangerous flash floods and mudslides.

Big Island Video News will have more on this storm through-out the day, today and tomorrow.