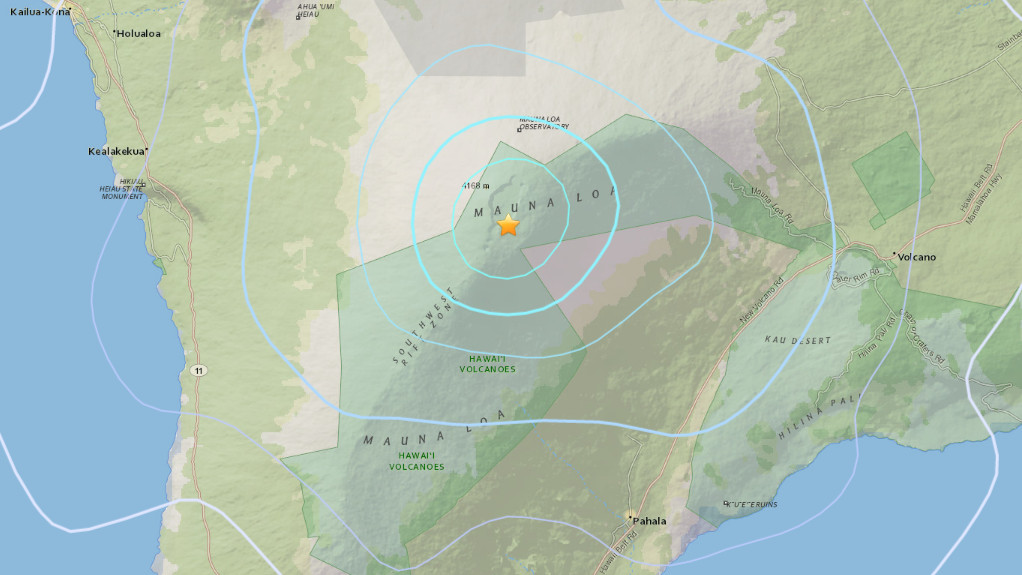 MAUNA LOA (BIVN) - The temblor shook in the same area as a handful of other recent earthquakes that took place in the last two weeks, most below magnitude 2.0.

The quake occurred at 4:25 a.m. HST and was located about a mile below the summit Mokuʻāweoweo Caldera.

The temblor shook in the same area as a handful of other recent earthquakes that took place in the last two weeks, most below magnitude 2.0.

UPDATE: The USGS reported this morning that the earthquake appears to be isolated. “As of 6:30 a.m., HST,” scientists stated, “no aftershocks have been observed. HVO’s deformation monitoring instruments registered the earthquake but show no significant change in deformation rates or patterns that would indicate increased volcanic hazard at this time.”

According to HVO’s Scientist-in-Charge, Christina Neal, the earthquake had no apparent effect on Kīlauea Volcano’s ongoing eruptions.

The most recent Mauna Loa status report from the USGS Hawaiian Volcano Observatory was on August 31.

Mauna Loa is not erupting. Global Positioning System (GPS) measurements continue to show ground surface deformations related to inflation of a magma reservoir beneath the summit and upper Southwest Rift Zone, with inflation occurring mainly in the southwestern part of Mauna Loa’s summit caldera magma storage complex. Shallow earthquakes, at depths less than 5 km (3 mi) beneath the south caldera and upper Southwest Rift Zone, continue to be the most frequently occurring type of seismic activity through the past week. Earthquake rates remain elevated relative to previously established baselines. Measurements from a continuously-monitored fumarole site within the summit caldera showed relatively steady fumarole temperatures and no significant changes in either sulfur dioxide or carbon dioxide concentrations in volcanic gas emissions.

While Magnitude-4 or greater earthquakes occurred in the summit of Mauna Loa six to seven months prior to the volcano’s two most recent eruptions in 1975 and 1984, scientists say “today’s isolated earthquake does not represent a significant departure from the seismic activity rate for the past year, so the Volcano Alert Level for Mauna Loa will remain at Advisory.”

Mauna Loa is the largest active volcano on the planet, rising 13,681 feet above sea level.