LAUPAHOEHOE (BIVN) - For the first time, the Ceratocystis fimbriata fungus has spread north of Hilo. A Rapid ʻŌhiʻa Death summit will be held on Oahu. 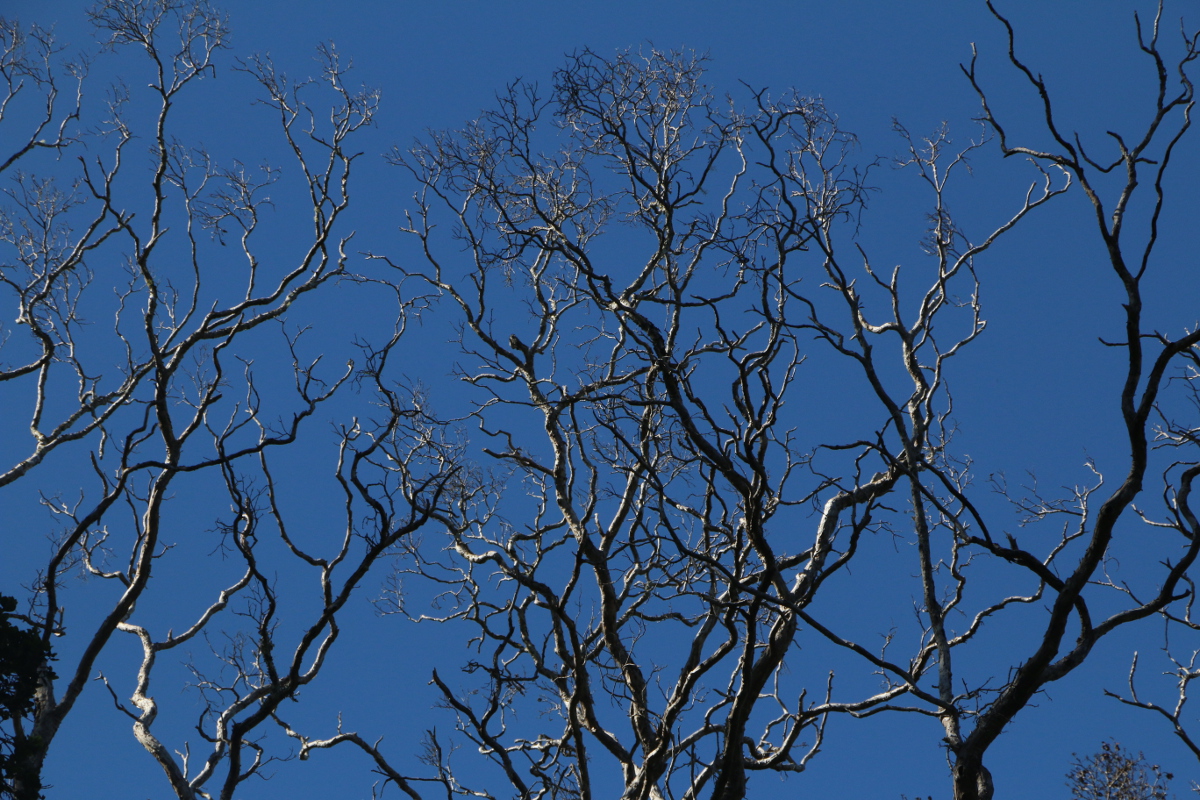 The death of a towering, 100 foot tall ōhiʻa in the Laupahoehoe forest signals the northward spread the disease on the east side of the Big Island.

Until now, the fast-moving fungal infection – Ceratocystis fimbriata – has not been observed north of Hilo. It was first spotted in Puna in 2010. 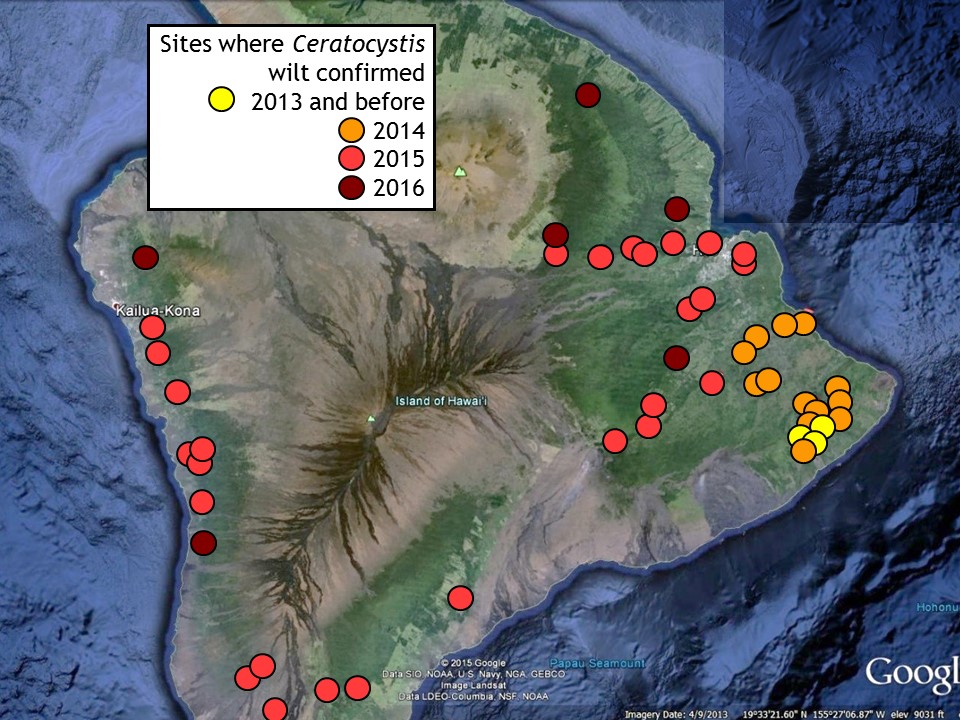 “From the road, in the Laupahoehoe Section of the Hilo Forest Reserve, Steve Bergfeld of the Hawai’i Department of Land and Natural Resources spots the enormous, towering, ōhiʻa tree; its thick branches now completely without leaves,” recounted the Hawaii Department of Land and Natural Resources in a news release. “The Hawai’i Island Branch Manager for the DLNR Division of Forestry and Wildlife wants to get a close-up look at the tree, after a technician first spotted it and took samples a week ago. “

Two laboratory tests have confirmed that this very old tree was killed by the fungus, the state says.

Video footage recorded by DLNR Senior Communications Manager Dan Dennison shows Bergfield traversing the forest to take a closer look at the enormous tree that is “several hundred years old.” The majestic ōhiʻa is now infected with the terminal illness.

“It’s devastating to look at the forest and the damage Rapid ʻŌhiʻa Death is doing to our ecosystem and our watersheds,” Bergfield said. “That tree is a giant in the forest. It also supports a lot of other plant life and bird life. It was an important part of our ecosystem. These trees have been here for hundreds of years and to see them go down to a disease like this is really heartbreaking.” 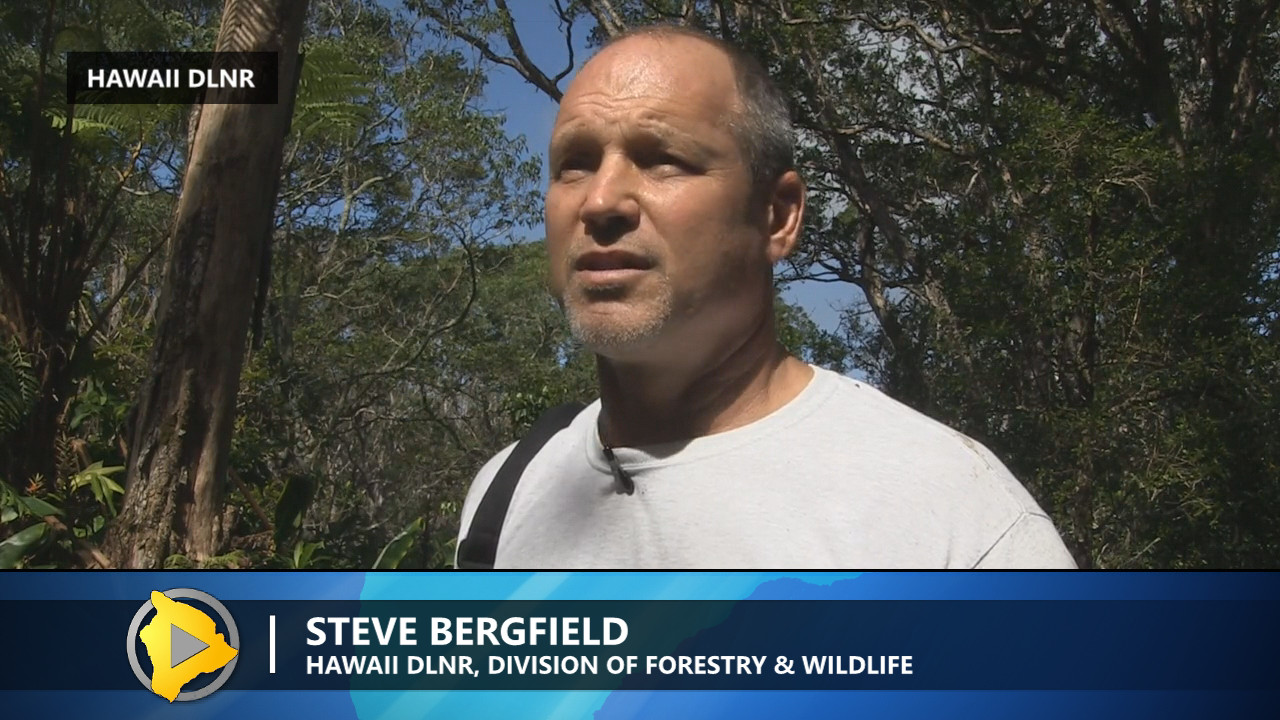 The Laupahoehoe Section of the Hilo Forest was already impacted by a 2013-2014 outbreak of the Koa looper, a native insect that defoliates entire koa trees during rare, unexplained outbreaks, DLNR says.

DLNR says the tree was spotted by a technician from the U.S. Forest Service’s Institute of Pacific Island Forestry, who collected the wood samples for lab testing. Verification was done by the U.S. Dept. of Agriculture’s Pacific Basin Agricultural Research Center in Hilo, and an entomologist from the University of Hawai’i’s College of Tropical Agriculture and Human Resources Extension Service also collected samples for research that suggests beetles are a primary cause for the spread of the fungus.

As for the dying giant tree, Bergfield said everyone will put their heads together to see what the best management strategy will be.

“I assume, more than likely,” Bergfield said, “we’ll fell the tree to get it out of the forest and cover it with tarps to keep insects from putting out frass (the powdery refuse or fragile perforated wood produced by the activity of boring insects), into the air.”

On Hawaiʻi Island, hundreds of thousands of ʻōhiʻa have already died across more than 50,000 acres (as of 9/9/2016) from the Ceratocystis fimbriata fungus.

In two weeks on Oahu, the first-ever Rapid ʻŌhiʻa Death summit will be held in the Capitol Auditorium. Governor David Ige, lead scientists, and policy makers engaged in the fight against the disease, will gather on Wednesday, November 30, 2016. The event is open to the public and is scheduled from 9 a.m. – 3 p.m.