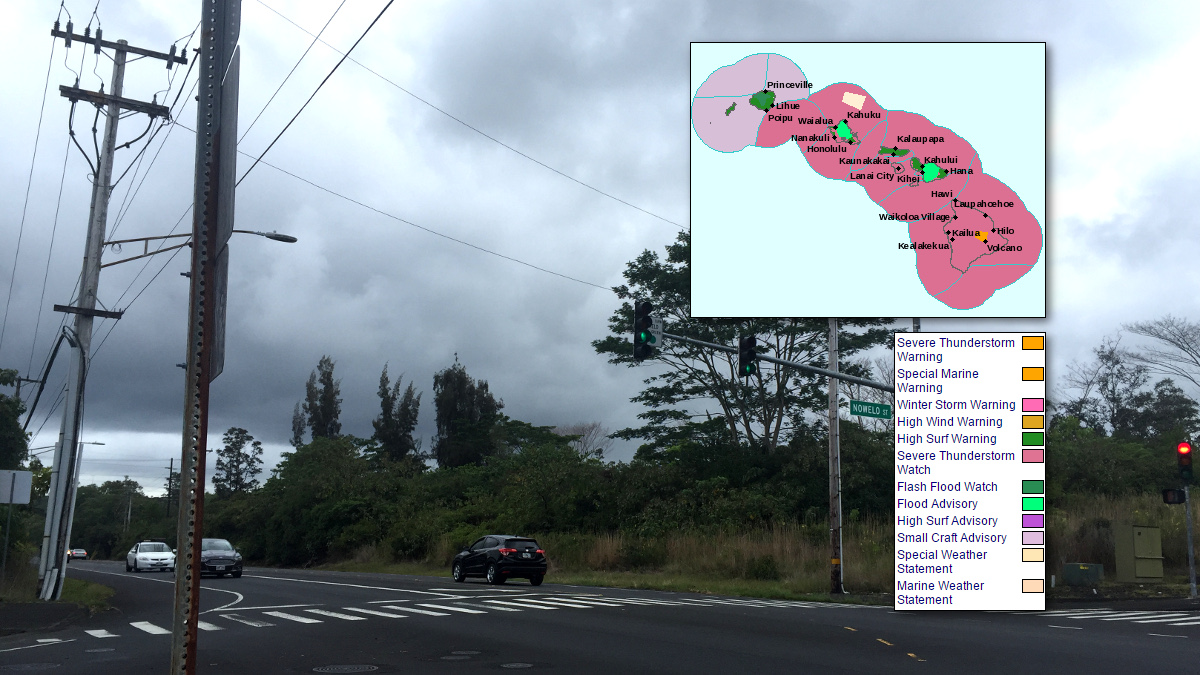 UPDATE (9:25 p.m.) Things are mostly quiet in Hilo now, however the National Weather Service has posted a Flood Advisory for the eastern shores of Ka’u. At 8:24 p.m., forecasters said radar indicated heavy rain near Naalehu, or near Kawa Flats. Rain was falling at a rate at near an inch an hour.

Locations in the advisory include but are not limited to Naalehu, Kawa Flats, Punaluu Beach, Pahala, Waiohinu and Discovery Harbour. The Flood Advisory is in effect until 11:30 p.m.

UPDATE (6 p.m.) The Severe Thunderstorm Warning, as well as the Severe Thunderstorm Watch, has expired for Hawaii Island. “At 5:55 p.m.” reported the National Weather Service, “radar indicated a thunderstorm over Hawaiian Paradise Park. This storm has been weakening, and is no longer severe. Therefore the warning will be allowed to expire. Other thunderstorms extended upslope to Glenwood and were nearly stationary. Heavy rain is still expected with these slow moving storms, and a Flash Flood Warning remains in effect for this area until 8:30 p.m.”

UPDATE (5:49 p.m.) The National Weather Service in Honolulu has issued a Flash Flood Warning for Hawaii County until 8:30 p.m.

At 5:30 p.m., radar indicated very heavy rain over the Puna District between Keaau and Hawaiian Beaches, forecasters said. Rain rates were from 3 to 4 inches per hour and may cause flooding in poor drainage areas especially along the highway from Keaau to Pahoa. The area of heavy rain was moving slowly toward the east.”

UPDATE (5:39 p.m.) A Severe Thunderstorm Warning has been reissued for the island of Hawaii until 6 p.m.

The National Weather Service reports that at 5:29 p.m. Doppler radar indicated a severe thunderstorm capable of producing quarter size hail and damaging winds in excess of 60 mph. This storm was located over Keaau. This storm was nearly stationary.

“Severe thunderstorms produce damaging winds, destructive hail, deadly lightning and very heavy rain,” forecasters warn. “For your protection, move to an interior room on the lowest floor of your home or business. Heavy rains flood roads quickly so do not drive into areas where water
covers the road.”

UPDATE (5:25 p.m.) Emergency officials say that due to severe weather, HELCO reports several power outages and crews are in the field making repairs. “Due to the power outages, some traffic signals in Hilo are not working,” Civil Defense said in an alert message. “Motorists are advised to treat affected intersections as four-way stops and drive with caution.”

UPDATE (4:15 p.m.) As of 4 p.m., the Severe Thunderstorm Warning has been cancelled, and a Flood Advisory has been issued.

Radar and rain gages showed heavy rain has moved over the Hilo area and western portions of the Puna District near Keaau. Rain rates were estimated to be 1 to 2 inches per hour, forecasters say.

Rainfall may continue over the Hilo area for the next several hours.

HAWAII ISLAND – The National Weather Service has issued a Severe Thunderstorm Warning for upper Puna and Hilo until 4:00 p.m. this afternoon.

“High winds and possible hail with heavy showers may occur in the affected areas,” civil defense says. “Be aware of possible flooding and severe storm conditions this afternoon.”

The storm is capable of producing half dollar size hail, forecasters say.

“For your protection, move to an interior room on the lowest floor of your home or business,” the National Weather Service says. “Heavy rains flood roads quickly so do not drive into areas where water covers the road.”

At 3:09 p.m. the storm was located 14 miles north of Hawaii Volcanoes National Park, and moving east at 5 mph.

A Severe Thunderstorm Watch is in effect for much of the state including Hawaii Island until 6 p.m. Thursday. A severe thunderstorm watch means “conditions are favorable for severe thunderstorms in and close to the watch area. Persons in these areas should be on the lookout for threatening weather conditions and listen for later statements and possible warnings.”

Severe thunderstorms produce damaging winds of 58 mph or higher or destructive hail the size of quarters of larger.

There are numerous warnings, watches and advisories for the island this evening. A Flash flood Watch is still in effect for Hawaii Island. The Winter Storm Warning has been cancelled for the summits of Mauna Kea and Mauna Loa, while a High Wind Advisory remains in effect.