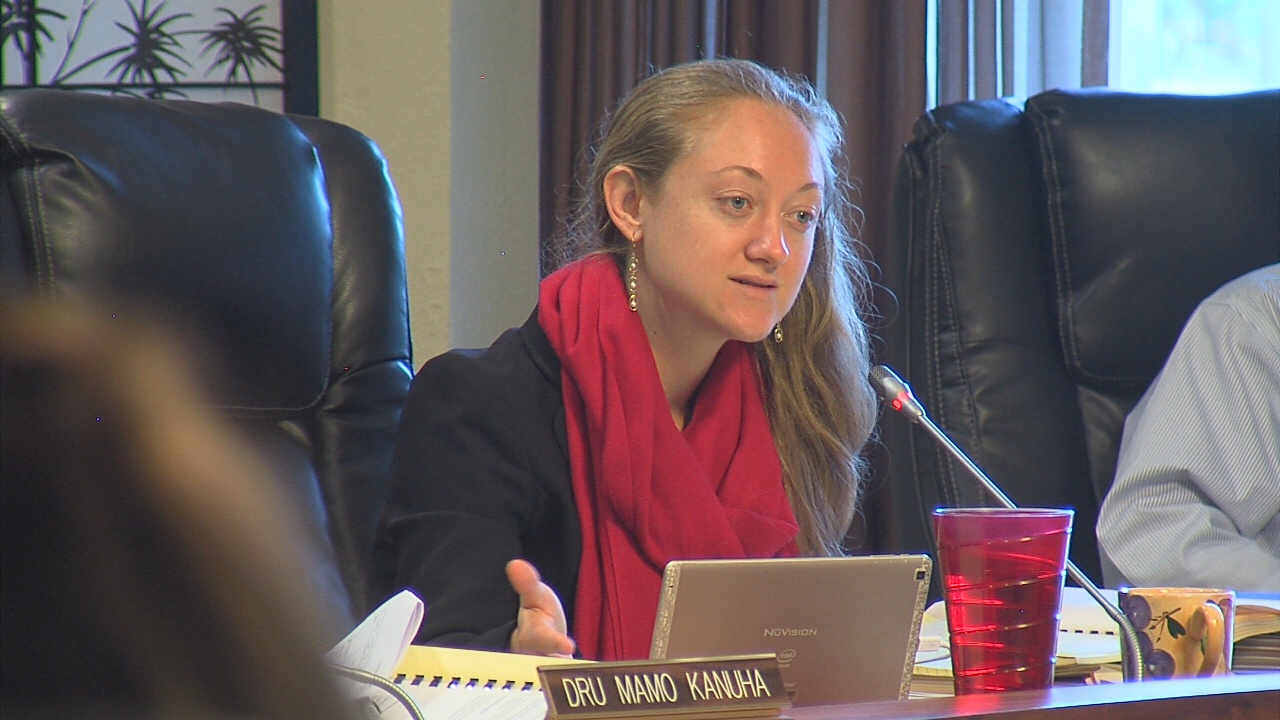 
(Video by David Corrigan) Puna resident Jon Olson testified before the Hawaii County Council (from Pahoa) in April about what he says are service inequities that hinder his home district. Olson hinted at the resolution detailed in this article.

(BIVN) – A Hawaii County councilwoman representing Puna wants local government to admit it has historically discriminated against her district, as well as the district of Ka`u, and to move in the direction of addressing the issue.

In a resolution submitted by District 5 Councilmember Jennifer Ruggles, the county is being asked to acknowledge that it and the Hawaii Department of Transportation “have historically discriminated against low income and native Hawaiian communities of the Puna and Ka`u districts, as established by the Office of Civil Rights’ September 28, 2000, ruling, and pledging the Council’ s commitment to addressing, and preventing discrimination against disadvantaged populations.”

Resolution 205-17 has been referred to the Committee on Governmental Relations and Economic Development. It will need to get the approval of the committee before the full council can take a vote.

According to the language in the measure:

WHEREAS, Title VI of the Civil Rights Act of 1964 prohibits discrimination on the basis ofrace, color, and national origin in programs and activities receiving federal financial assistance, and Executive Order 12898, Federal Actions to Address Environmental Justice in Minority Populations and Low-Income Populations, Section 1- 101, directs federal agencies to identify and address the disproportionately high and adverse human health or environmental effects of its programs, policies, and activities on minority and low-income populations; and

WHEREAS, on September 28, 2000, the Director of the Office of Civil Rights of the Federal Highways Administration ruled in favor of the Sustainability Committee in response to its complaint of discrimination against the Hawai`i Department of Transportation (HDOT) and Hawaii County as indicated in the attached Exhibit A; and

WHEREAS, complainants alleged that the substandard subdivisions of Hawai`i Island in Puna and Ka`u) have been, by design, denied access to basic infrastructure and services for forty years while continuously providing taxes that subsidize additional services to existing, already served, higher income communities; and

WHEREAS, complainants also alleged that” the primary financial beneficiary of the tax subsidy provided by these substandard subdivisions is the town of Hilo, which has had a substantial per capita subsidy in taxes paid and services received for every year since 1955″; and

WHEREAS, the Federal Highways Administration concluded that evidence supported the allegations raised in the complaint of discrimination, and that HDOT and Hawai`i County were not in compliance with the requirements of Title VI of the Civil Rights Act of 1964 as outlined by the procedures and requirements at 23 Code of Federal Regulations (CFR), Part 200 and 49 Code of Federal Regulations (CFR), Part 21 as well as Executive Order 12898, Section 3-3; and

WHEREAS, according to the April 12, 2017 budget presentation by Hawai`i County Police Chief Paul Ferreira, the district of Puna is being served by the fewest police officers per capita in Hawai`i County; and

WHEREAS, substandard roads in Puna cause many residents to drive for more than an hour to reach the nearest hospital; and

WHEREAS, the lack of any wastewater treatment facilities in Puna is the primary challenge to the construction of a hospital in the area; and

WHEREAS, the Council fmds that the access to clean drinking water for many Puna residents does not meet the standards established by the United Nations human right to water and sanitation in Resolution 64/292, in part because many residents must drive up to 40 minutes on unpaved substandard roads to access and haul drinking water from spigots; and

WHEREAS, disparity in Puna is prevalent given that access to basic infrastructure and services such as limited police services, substandard roads, a lengthy distance to the nearest hospital, and lack ofreasonable accessibility to clean water and sanitation, all endanger the health and well-being ofresidents as well as limit economic growth, creating an inequitable experience to that of neighboring districts of Hawai`i County, despite having a comparable population size and paying comparable taxes; now, therefore,

BE IT RESOLVED BY THE COUNCIL OF THE COUNTY OF HAWAII that it acknowledges the September 28, 2000, ruling establishing that the County of Hawai`i and the Hawai`i Department of Transportation have historically discriminated against low income and Native Hawaiian communities in Puna and Ka`u.

BE IT FURTHER RESOLVED that the Council of the County of Hawai`i herein commits to addressing disparity and preventing discrimination against low income, Native Hawaiian, and other disadvantaged populations of Hawai`i County, particularly in Puna and Ka`u.