HAWAII VOLCANOES NATIONAL PARK - In this week's Volcano Watch, scientists with the USGS Hawaiian Volcano Observatory write about upgrades to a subset of seismic stations at the summit of Kīlauea Volcano. 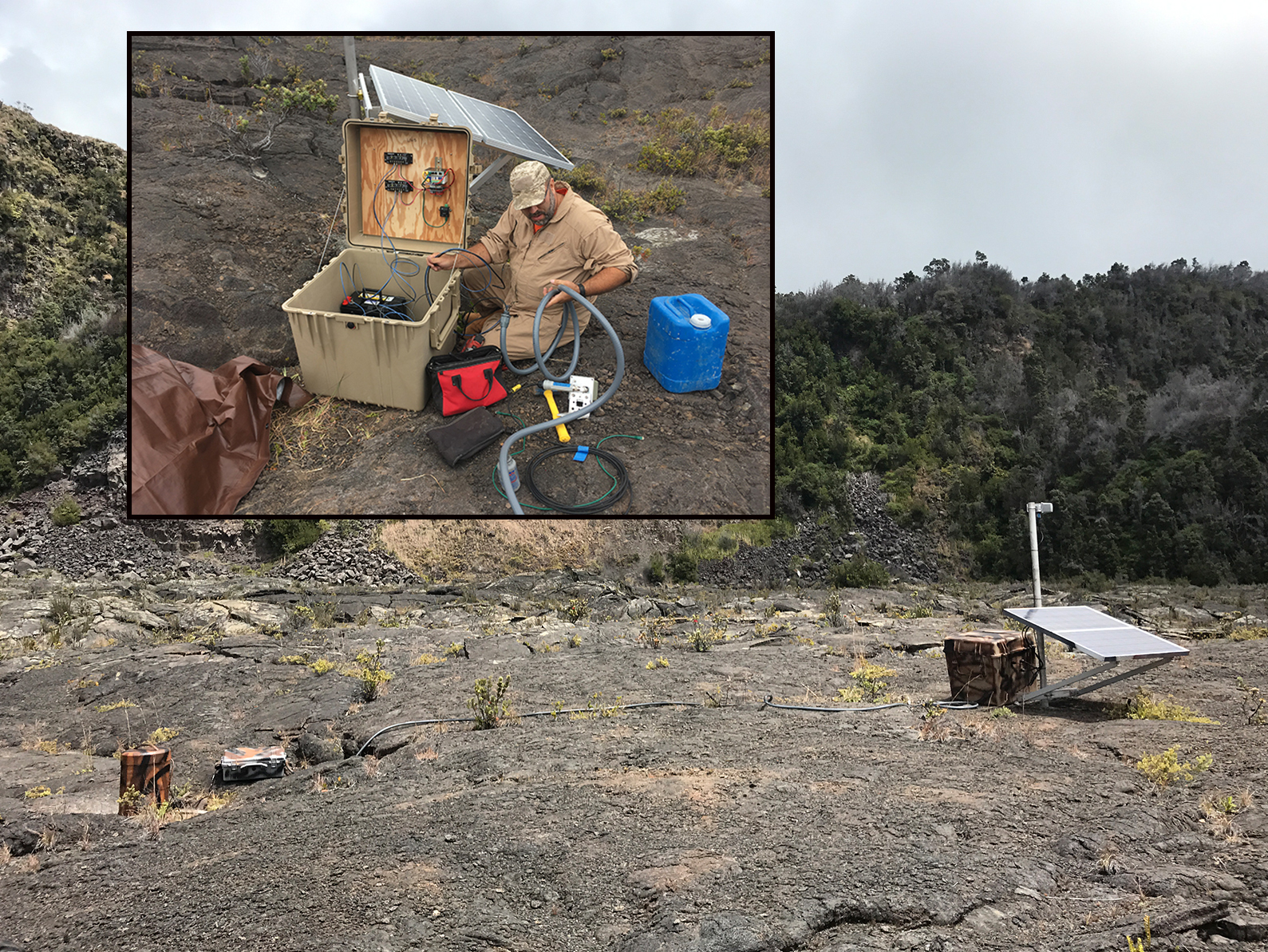 USGS Hawaiian Volcano Observatory broadband-seismic stations located at the summit of Kīlauea have been significantly upgraded over the past three years. During the upgrades, HVO field engineers (inset) complete the wiring connections of the solar power and telemetry systems at each site, which are about 10 m (33 ft) from the seismometer. The equipment is camouflaged to minimize its visual impact on the natural environment. (USGS photos.)

Field engineers at the USGS Hawaiian Volcano Observatory (HVO) recently completed a multi-year effort to upgrade a subset of seismic stations at the summit of Kīlauea Volcano.

Starting in 2014, each of the stations was progressively upgraded with a new-generation broadband seismometer, solar-power system, radio, antenna, enclosure, and cabling. The new enclosures for the seismometers were designed with better insulation properties to buffer the effects of changing temperatures throughout the day.

The latest upgrades are an important milestone for HVO. The stations ensure that Kīlauea will remain a productive laboratory for the advancement of volcano seismicity. They will also continue to improve our understanding of the complex magma plumbing system beneath volcano’s summit area.

HVO’s original seismometers were installed in 1994 as a year-long field test of “broadband” seismometers—digital sensors that are more sensitive over a much greater frequency range than are the short-period analog seismometers that were widely used at the time. But the 1994 broadband instruments were kept past the one-year test period, because they proved crucial for recording many types of earthquake and volcanic signals that scientists were able to analyze in new ways.

Frequency is one way of describing the number of oscillations (peaks and troughs) of a seismic signal, typically measured in cycles per second, or Hertz (Hz). In volcano seismology, the dominant frequency of a seismic signal is related to different processes within the volcano.

The movement of magma under Kīlauea generates a variety of low-frequency (often called Long-Period) and Very Long Period earthquakes with peak frequencies of 0.17 Hz or 60 seconds. The latter earthquakes, which can only be detected with broadband seismometers, were virtually invisible to the existing seismic network. The value of the dense broadband network became even more apparent when the summit eruption within Halema‘uma‘u began in 2008.

In 2009, the American Recovery and Reinvestment Act (ARRA) was enacted by Congress and signed into law by the President. This provided resources for HVO to convert the mixed analog and digital monitoring network to an all-digital network—a first for a U.S. volcano observatory.

With ARRA funding, HVO purchased new field-hardened computers (called digitizers) to record seismic signals on-site and digital radios to transmit the data in real time to HVO. The digitizers significantly expanded the useful dynamic range of the original broadband network. This added capability was important for characterizing the mechanism that generates seismic signals associated with large rockfalls into the summit lava lake. Scientists also are using the expanded seismic signals to develop models of the short-term rise and fall of the lava lake surface related to the accumulation and release of volcanic gas in the uppermost part of the lava lake.

It became clear in about 2011 that the harsh environmental conditions in Kīlauea’s summit caldera were taking a toll on the aging seismometers. The instruments were corroding inside and outside, leading to inconsistent measurements of ground shaking. Some sensors were failing. So, starting in 2014, HVO placed a high priority on improving the summit broadband network, and the stations were upgraded in phases as resources allowed.

This upgraded network reflects state-of-the-art earthquake monitoring, and offers volcano seismologists a more powerful tool to investigate processes that cause ground shaking at Kīlauea. This in turn supports advances in our understanding of the volcano’s magma plumbing system, eruptive activity, and hazards.