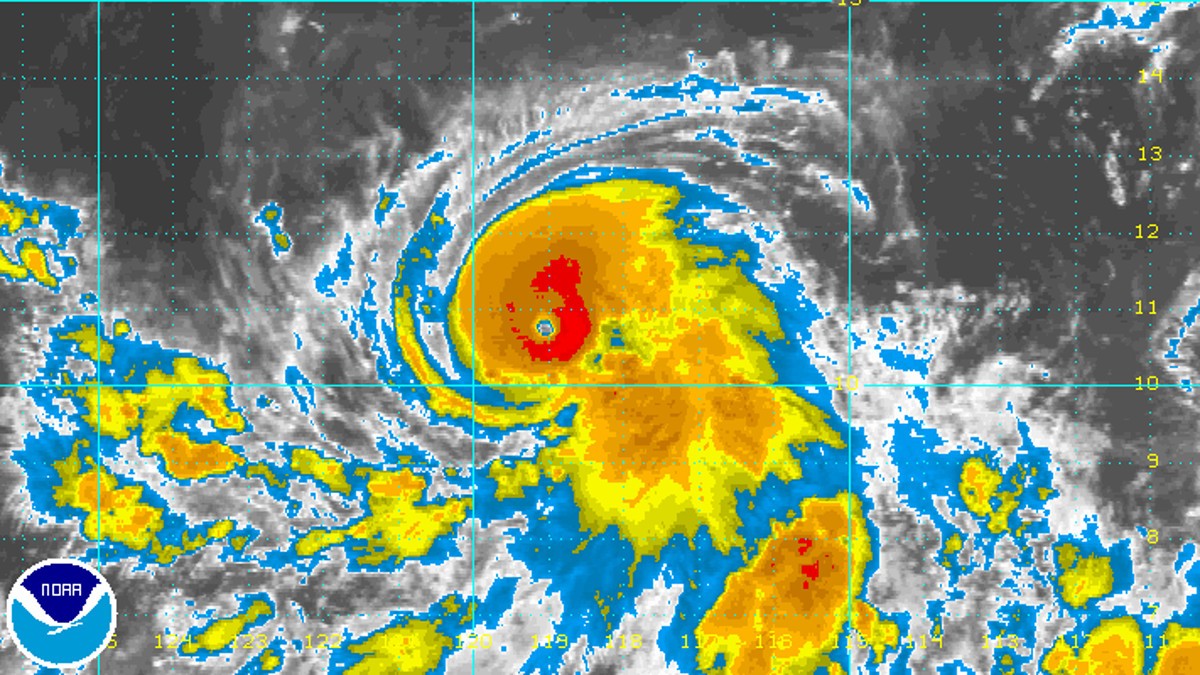 PACIFIC OCEAN - Fernanda is now a Category 3 hurricane on the Saffir-Simpson Hurricane Wind Scale, and the rapid intensification has  not ended. 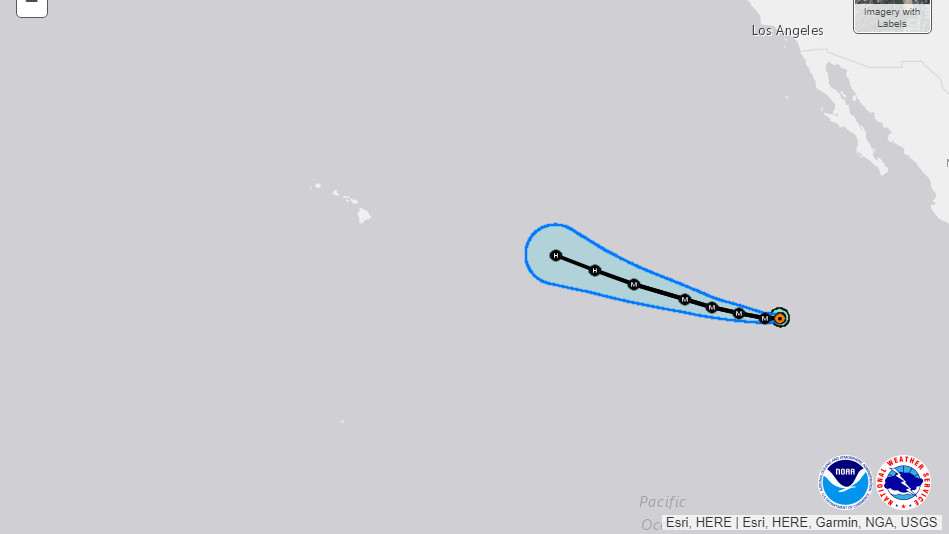 
(BIVN) – Rapidly-intensifying Fernanda has become a major hurricane as it moves west over the warm waters of the Eastern North Pacific.

Fernanda could reach the Central Pacific next week, although by that time the hurricane is expected to begin gradually weakening. 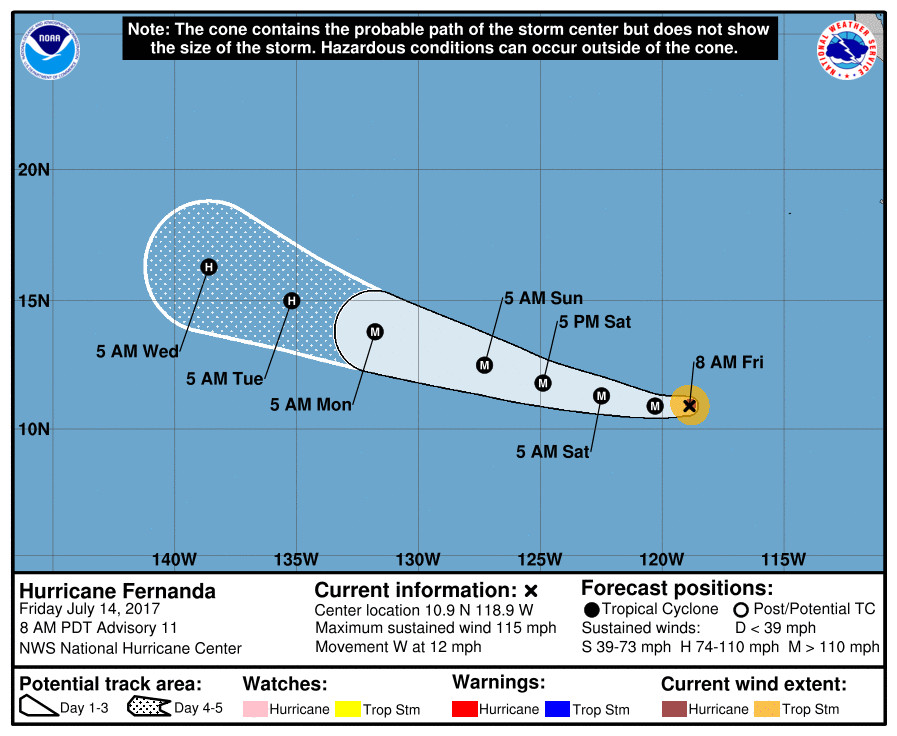 Its still too early to know if the storm will have an impact on Hawaii Island. “Looking out into the long range, Hurricane Storm Fernanda is currently located about 2550 miles east southeast of The Big Island,” wrote the National Weather Service in Honolulu today. “The latest 5 day forecast from The National Hurricane Center in Miami has Fernanda moving in a general westerly direction with a bit more west northwest direction during days 4 through 5. A long period east swell from Fernanda is forecast from the latest Wavewatch guidance to arrive Tuesday night or Wednesday. The size of this swell will be highly dependent on the eventual track and intensity of the system. Current guidance indicates that advisory level surf is a possibility along exposed shorelines.”

Here is the discussion posted by forecasters of the National Weather Service this morning:

The satellite presentation of Fernanda continues to improve. An eye has been apparent in shortwave and longwave IR imagery for the past several hours. An AMSR-2 overpass around 0843 UTC showed a well defined eye structure, completely surrounded by deep convection. Subjective Dvorak T-numbers at 1200 UTC increased to 5.0 from TAFB and 5.5 from SAB, and since that time the cloud top structure has improved a little more. On that basis, the initial intensity has been increased to 100 kt, making Fernanda the second major hurricane of the 2017 eastern North Pacific hurricane season.

Fernanda remains in a very favorable environment for intensification. The cyclone’s intensity has increased by 40 kt in the past 24 hours and there are no current indications that the period of rapid intensification has ended. In fact, according to the SHIPS diagnostics, the hurricane is now approaching an area of higher ocean heat content. Surprisingly, most of the guidance shows relatively little increase in intensity during the next 48 hours. Considering that most of the guidance has thus far shown not nearly the extent of intensification that has been observed, the NHC forecast remains well above the guidance. The NHC forecast has been adjusted substantially higher for the first 36 hours to account for the higher initial intensity, but is closer to the previous forecast after that. Beyond 48 hours, lower SSTs along the forecast track and a drier environment should lead to a gradual weakening.

The hurricane is continuing its steady westward track and the initial motion estimate is 265/10 kt. There is no change to the track forecast reasoning, and confidence in the track forecast remains high due to a tight clustering of the model tracks. Fernanda is still expected to move generally westward for the next day or so, before turning toward the west-northwest due to a weakening of the ridge to the north. No significant changes were made to the NHC track forecast, which remains very close to the various multi-model consensus aids. 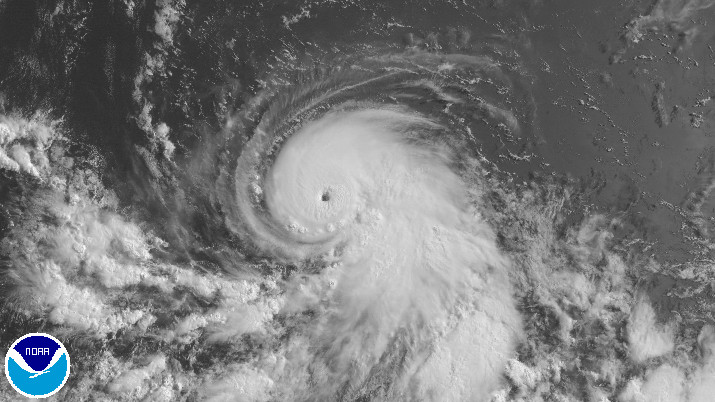