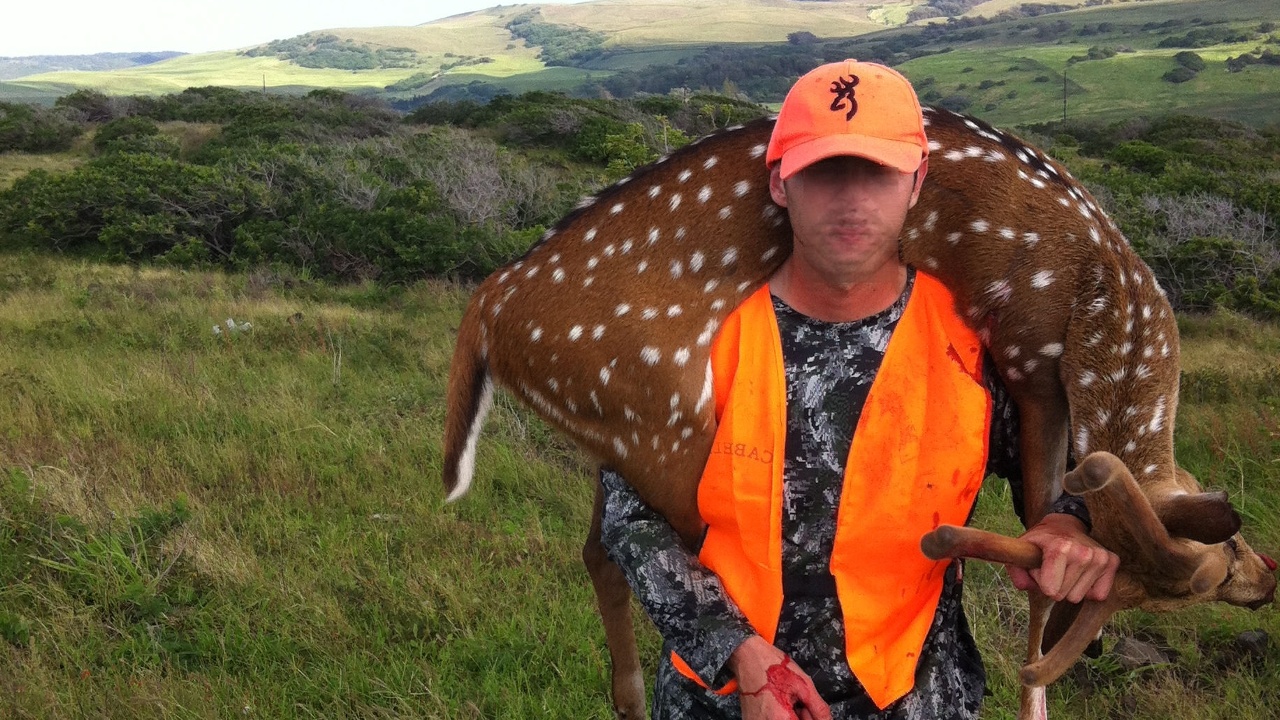 File image from April 2012, when the Hawaii DLNR said the first axis deer was taken on Hawaii Island as a part of a coordinated control effort to eradicate the ungulate.

HAWAII ISLAND - After five years of "dogged pursuit", the Big Island Invasive Species Committee finally concluded that the deer are no longer present on the island.

(BIVN) – Its official. Axis Deer are no more on Hawaii Island.

The deer were illegally introduced to the Big Island in 2009, and – out of concerns the animals would become established as invasive pests and a threat to the environment – a coordinated response was organized to eradicate the ungulate.

After 5 years of dogged pursuit, the Big Island Invasive Species Committee (BIISC) has concluded that axis deer are no longer present on the Big Island.

Axis deer were illegally introduced to Hawaii in 2009, and concerned community members began reporting sightings in 2011. An image of the invasive ungulate was captured on a game camera in April 2012, and an interagency response team was formed. BIISC led a team that included representatives from DLNR, the U.S. Fish & Wildlife Service, USGS, Hawaii Volcanoes National Park, Three Mountain Alliance Watershed Partnership and The Nature Conservancy, all committed to preventing deer from establishing on the Big Island.

The response in 2012 led to the dispatch of four axis deer in the Ka’u district, the initial site of the illegal introduction. To ensure that all deer were located, BIISC wildlife biologists, with support from the interagency response team, continued to hunt for remaining deer. The dense Christmasberry thickets of Ka’u posed a challenge for team members, who used infrared technology and game cameras in addition to helicopter and ground surveys. In all, over 1 million acres of the Big Island were surveyed. Nearly 7,000 hours of game camera surveys across 5200 acres of the highest risk area revealed no sign of deer.

In addition, BIISC staff responded to hundreds of calls over the years of potential “deer” sightings from Kohala to Puna. Mouflon sheep and even wild goats can be easily mistaken for the small, nimble axis deer, and these were the animals generally found in the location upon investigation of those reports. However, BIISC staff felt that all reports provided invaluable information. “We were really grateful to the community for their efforts in reporting possible deer sightings. It demonstrated that people were aware of the threats the deer pose, and they were very invested in making sure axis deer didn’t get out of control on the Big Island,” says Brett Gelinas, a wildlife biologist with BIISC who logged hundreds of hours responding to the calls.

Axis deer could cost millions to Big Island agriculture and ranching interests, and have the potential to decimate forests already under threat. lust eight deer were introduced to Molokai in 1868, and increased to a population of over 7,000 in three decades, becoming a pest so intrusive that Molokai Ranch imported hunting teams to take down deer by the thousands. Fences designed to prevent entry by feral pigs are not sufficient for axis deer, which can easily jump over six feet and have caused over a million dollars of damage annually to crops and landscapes on Maui. Axis deer are a known vector for the bovine tuberculosis that threatens cattle, and have been implicated in previous bovine tuberculosis outbreaks in the state.

Although the response for the 2009 introduction is considered to be at a successful end, invasive species specialists remain on alert for potential future illegal introductions, and say residents should not hesitate to contact them with any possible deer sightings. Per Springer Kaye, manager of the Big Island Invasive Species Committee, “This effort of interagency response and community participation came together extremely well-together we figured out how to do this, and we’re ready for the next time.”


File video by David Corrigan, voice of Stephanie Salazar. In September 2011, the now-late State Senator Gil Kahele gave an interview about the invading axis deer, standing outside the cage of two specimens on display at the Pana’ewa Rainforest Zoo.