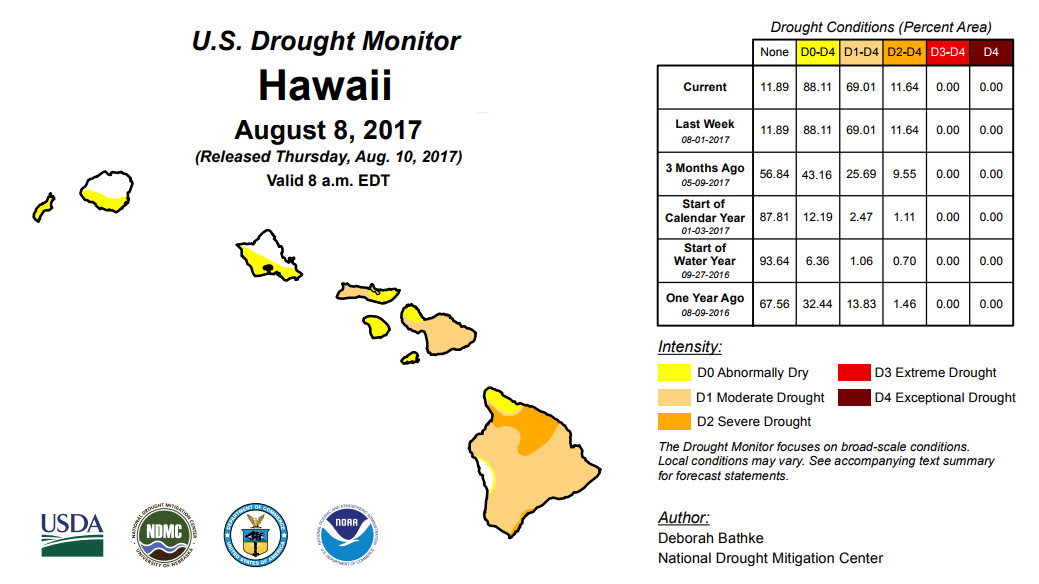 From U.S. Drought Monitor, elements re-arranged to fit on screen

HAWAII ISLAND - Below normal rainfall has increase the D2 category on the U.S. Drought Monitor Map, and weather forecasters say impacts to agriculture have been reported.

(BIVN) – Severe drought conditions expanded on Hawaii Island in July to cover most of the South Kohala and Hamakua Districts, according to the current U.S. Drought Monitor map.

The below normal rainfall is the result of “anomalously stable atmospheric conditions” that started in June and continued through the first half of July, weather forecasters say.

According to the August 9 Drought Information Statement issued by the National Weather Service in Honolulu, “rainfall increased during the second half of July to help stabilize the drought conditions, but decreased once again in early August.”

“Severe drought conditions also popped up along the lower elevations of the Kau District from Punaluu to South Point,” the National Weather Service reported. “Moderate drought, or the D1 category, filled in most of the remaining areas of the Big Island with the exception of the Kona slopes and the windward slopes of the Kohala.”

In addition to ginger reported last month, sweet potato and taro farmers recently indicated reduced production on the windward side. Pastures and general vegetation in the southern portion of the Ka’u District and portions of the Humuula Saddle in the interior of the island were reported to be in poor condition. Ranchers in the Hamakua and Puna Districts indicated that water holes have been drying up. This is consistent with the observation from the Hawaii County Department of Water Supply which mentioned a reduction in flow from springs in the Ninole, Hakalau, and Naalehu areas.

All of the U.S. Geological Survey monitored streams on the Big Island had 30-day flow levels in the “below normal” range, and forecasters say “there does not appear to be any compelling reason to expect a change from near to below normal streamflow through the rest of the 2017 summer season and possibly into early fall.”