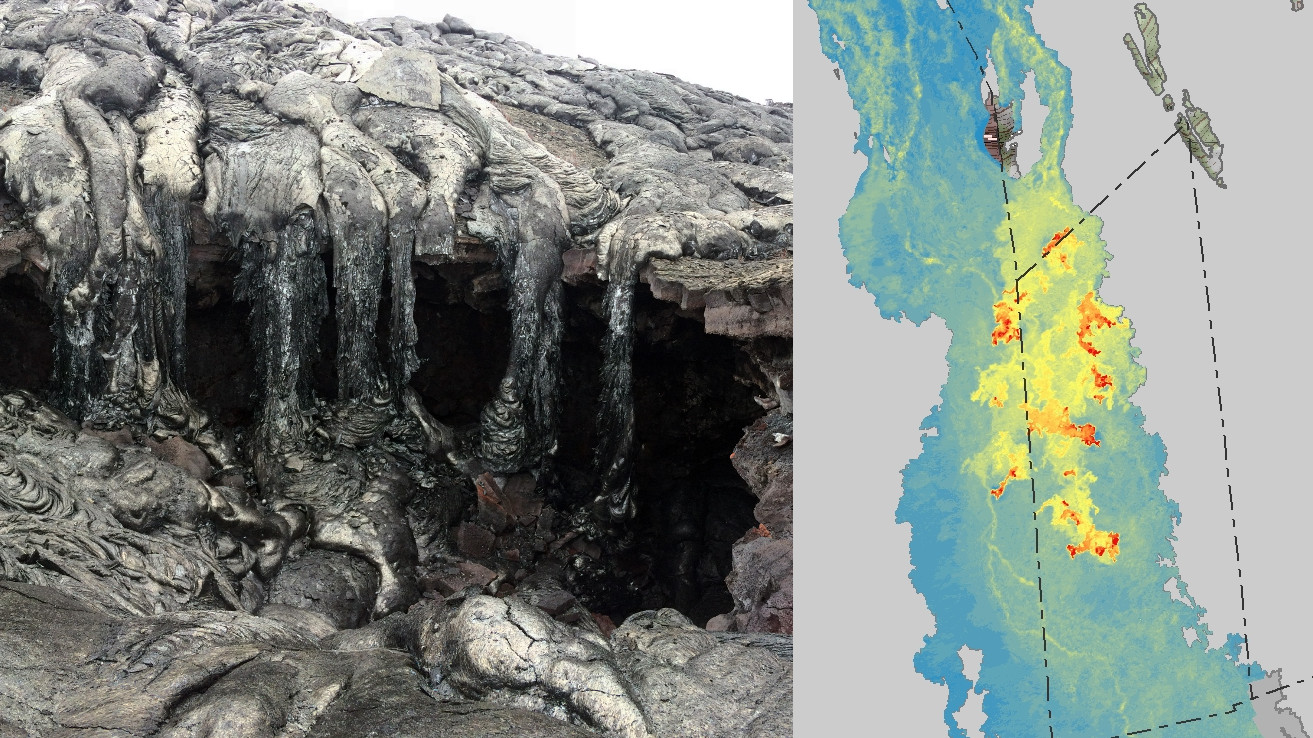 HAWAII VOLCANOES NATIONAL PARK - Scientists produced two new maps of the 61g flow field, and found an opening into an old lava tube system that has been partly filled with lava. 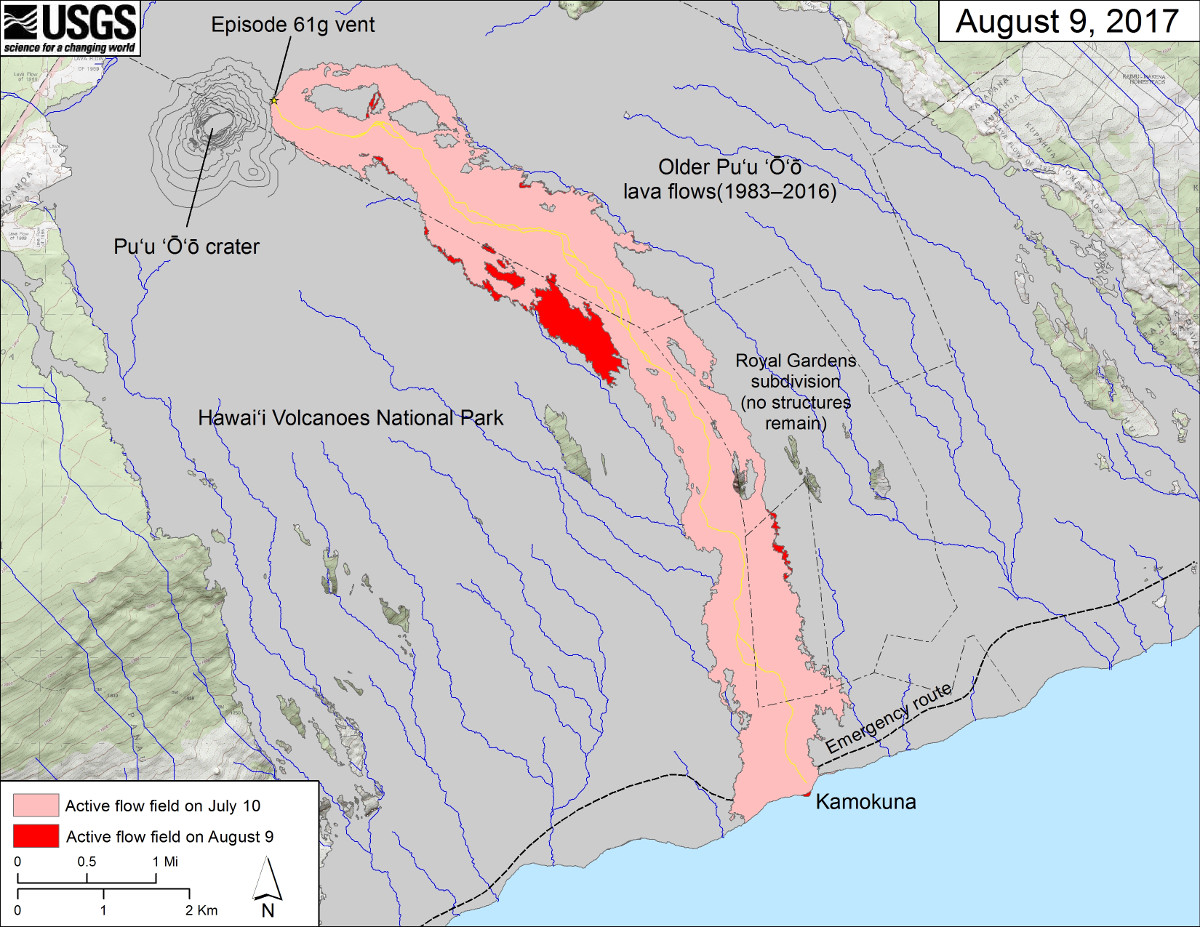 (BIVN) – An August 9 expedition to map the active lava flow on the East Rift of Kilauea volcano produced new maps and uncovered an impressive lava tube.

While mapping the episode 61g flow margins, USGS Hawaiian Volcano Observatory geologists found an opening into an old lava tube system that has been partly filled with new lava. Most of the cooled lava cascades were intact and sitting on top of rubble from the caved-in roof of the abandoned tube. 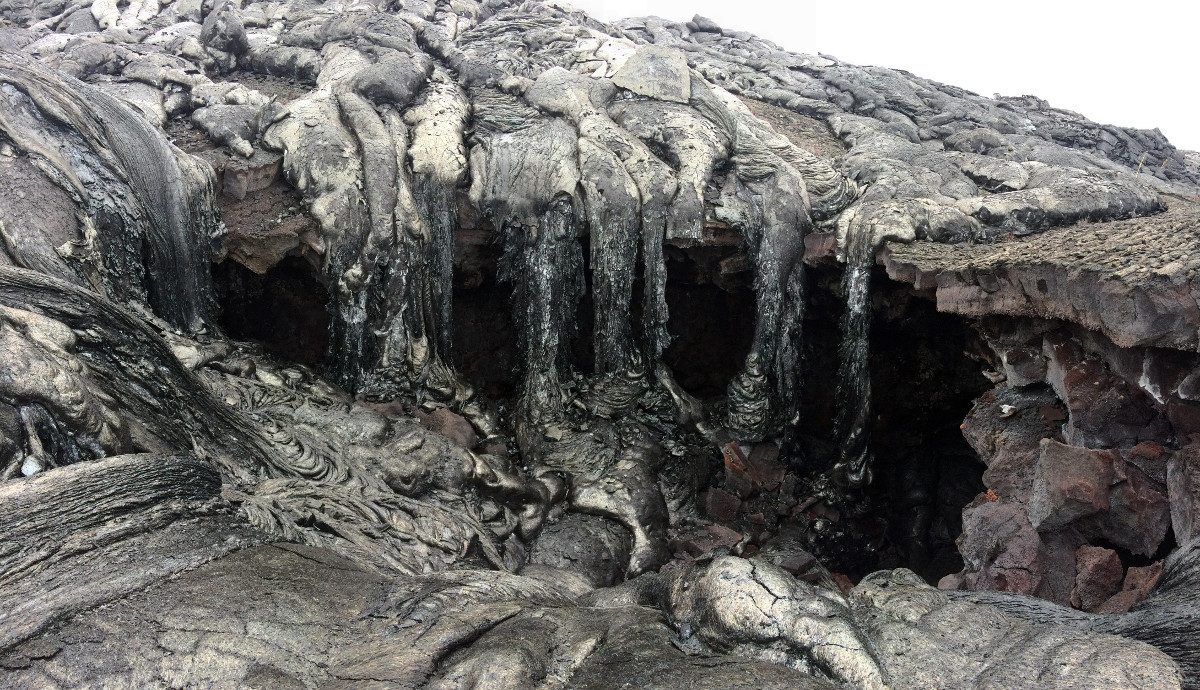 (USGS) The opening in the tube (right) was partially filled with new lava, but was still roughly 3 m (10 ft) high.

The scientists reported the June 26 breakout (lighter-colored flow in the center of the photo below) is active on the coastal plain and at the flow front. “There’s been no significant advancement of the flow front since July 31,” USGS wrote on Wednesday. “Today, active breakouts were located roughly 1.5 km (0.9 mile) from the emergency route.” 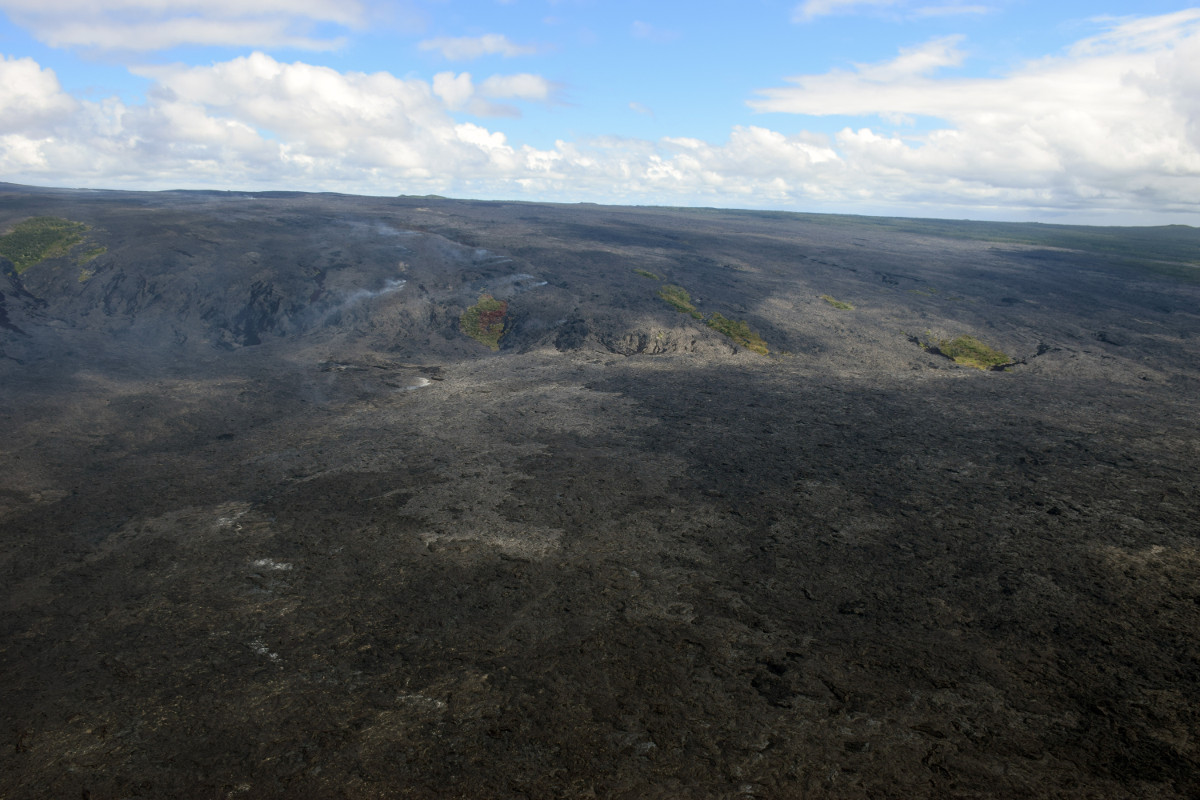 (USGS) Scattered surface flows are active on much of the upper flow field (above the pali) from three separate breakouts that started on June 13, 26 and July 26.

The Kamokuna ocean entry remains active and the lava delta slowly growing. As of August 9, the delta was about 6.8 acres (2.8 hectares) in size.

Stability of the delta remains a concern. “Many coast-parallel cracks are visible,” scientists wrote after an overflight, “including a large crack near the center that spans the entire width of the delta. A few small streams of lava entering the ocean can be seen near the front of the delta.” 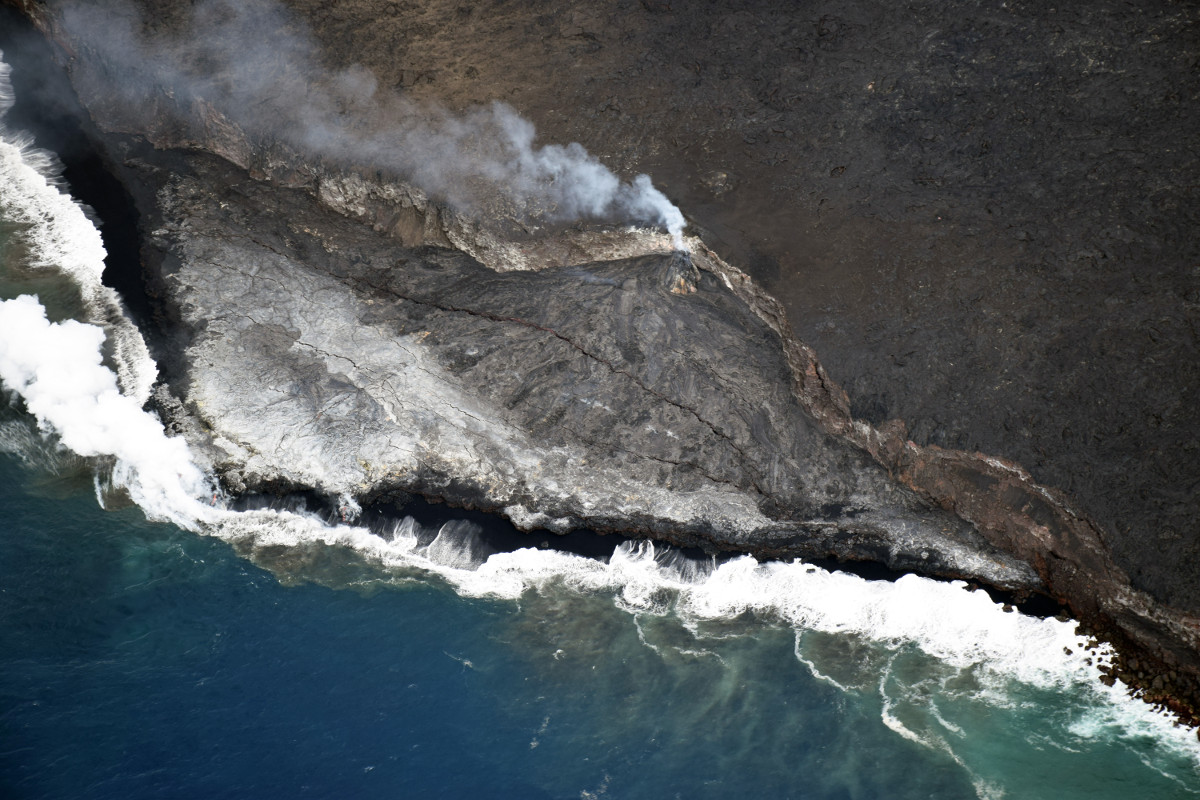 (USGS) The view of the Kamokuna ocean entry from above.

The large cracks highlight the unstable nature of the delta and the potential of its sudden collapse into the sea, USGS warns.

These lava flows pose no threat to nearby communities.

Scientists also produced a second map with a new look: A thermal map, constructed by “stitching many overlapping oblique thermal images collected by a handheld thermal camera during a helicopter overflight of the flow field,” USGS says. 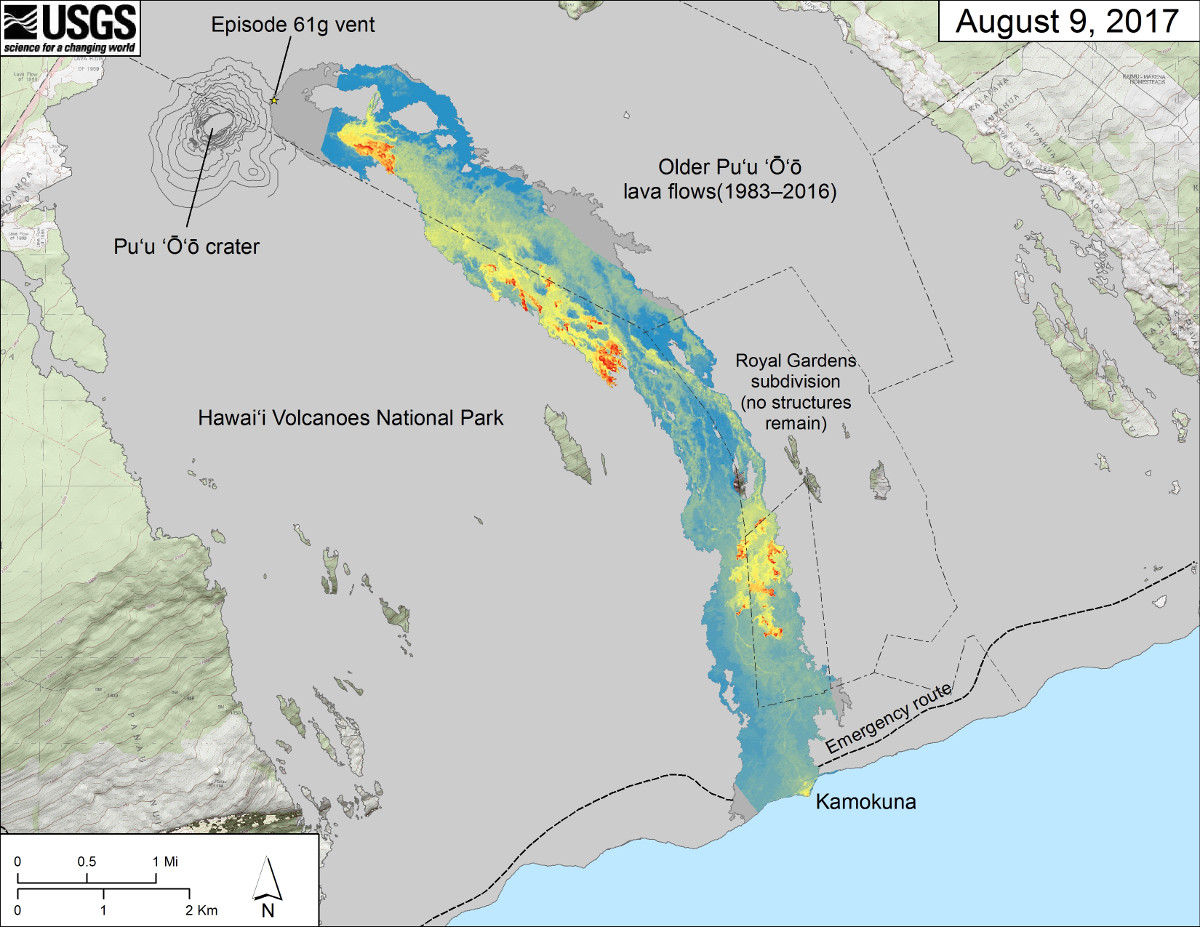 (USGS) This map is similar to the map above but shows a thermal map over the Episode 61g lava flow. Cooler colors (blue and green) show cooled, inactive portions of the flow surface. Hot colors (red and orange) show areas of active surface breakouts. In some places, the trace of the subsurface lava tube can be seen due to the slightly higher temperatures on the surface (for instance, the tube is visible just upslope of the Kamokuna ocean entry). Areas of the Episode 61g flow not covered by the thermal map are shown as dark gray.