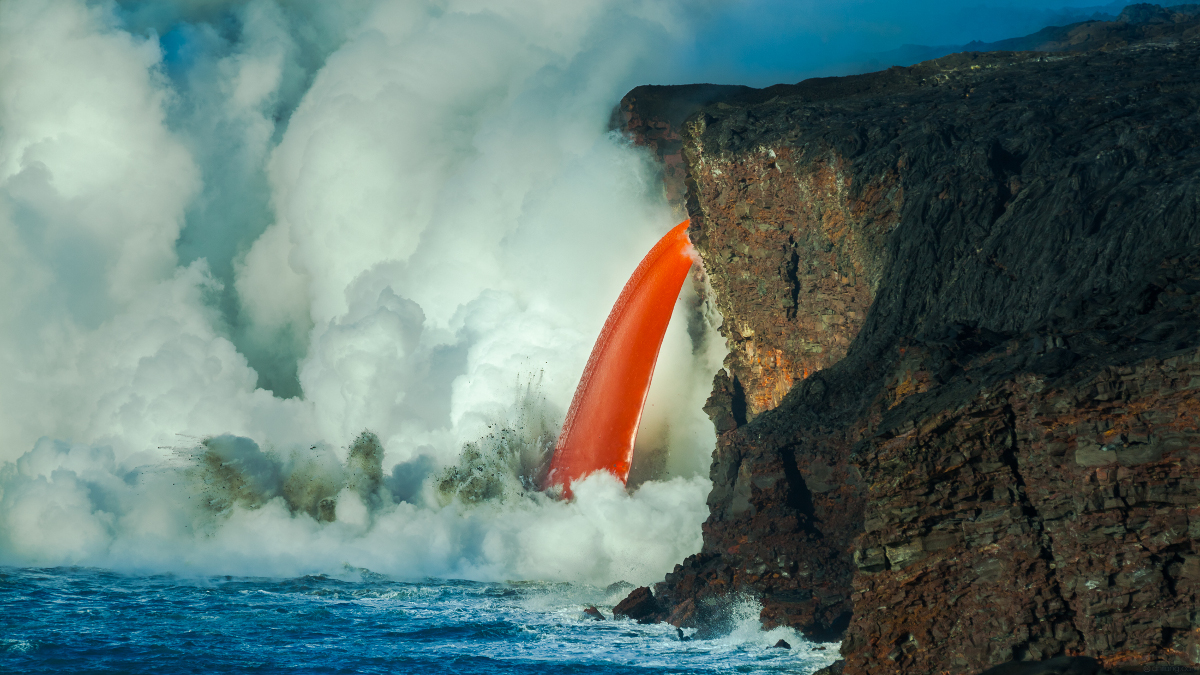 HAWAII ISLAND - The Coast Guard rule keeping boats 984 feet away from the lava ocean entry is effective from September 28, 2017 through March 28, 2018.

(BIVN) – The October 8th Environmental Notice has a lava ocean entry theme, complete with a photo of the famous fire hose taken by Dhilung Kirat (above) on its cover page.

That is probably because inside the Office of Environmental Quality Control publication is a federal notice that the temporary Coast Guard rule regulating boating activity at the Kamokuna ocean entry has been extended into 2018.

“The Coast Guard is extending, for an additional six months, the existing temporary safety zone surrounding the entry of lava from the Kīlauea volcano into the navigable waters of the Pacific Ocean on the southeast side of the Island of Hawaiʻi,” the notice reads. “The extension of this safety zone is necessary to protect persons and vessels from hazards associated with molten lava entering the ocean while the proposed rule is reviewed.”

“Entry of persons or vessels into this safety zone remains prohibited, unless specifically authorized by the Captain of the Port (COTP) Honolulu, or his designated representative,” the USCG says.

Lava flow that enters the ocean can be potentially hazardous to anyone near it, particularly when lava deltas collapse. A lava delta is new land that forms when lava accumulates above sea level, and extends from the existing base of a sea cliff. Persons near active lava flow entry sites incur potential hazards, particularly when lava deltas collapse. These hazards include, but are not limited to, plumes of hot, corrosive seawater laden with hydrochloric acid, and fine volcanic particles that can irritate the skin, eyes, and lungs; explosions of debris and eruptions of scalding water from hot rock entering the ocean; sudden lava delta collapses; and waves associated with these explosions and collapses.

The temporary final rule was first established on March 28, 2017, a few months after a large portion of lava delta collapsed into the ocean at the Kamokuna entry point. That same month, a new delta began to form.

On May 8, 2017, a public meeting on the rule was held in Hilo. Big Island Video News recorded.

During the period of the TFR, four tour operators and one photographer with economic ties to lava tourism petitioned the COTP Honolulu for entry within 300 meters of the high-hazard zone. They also requested and petitioned for various levels of entry distances—ranging from a close, safe distance to 50 meters—based on sea conditions resulting from the lava entry. The COTP Honolulu granted express authorization for entry within 300 meters to the five operators. The authorization included operational restrictions and other vessel safety criteria requirements considered by the COTP Honolulu and will continue under the extended period of this TFR.