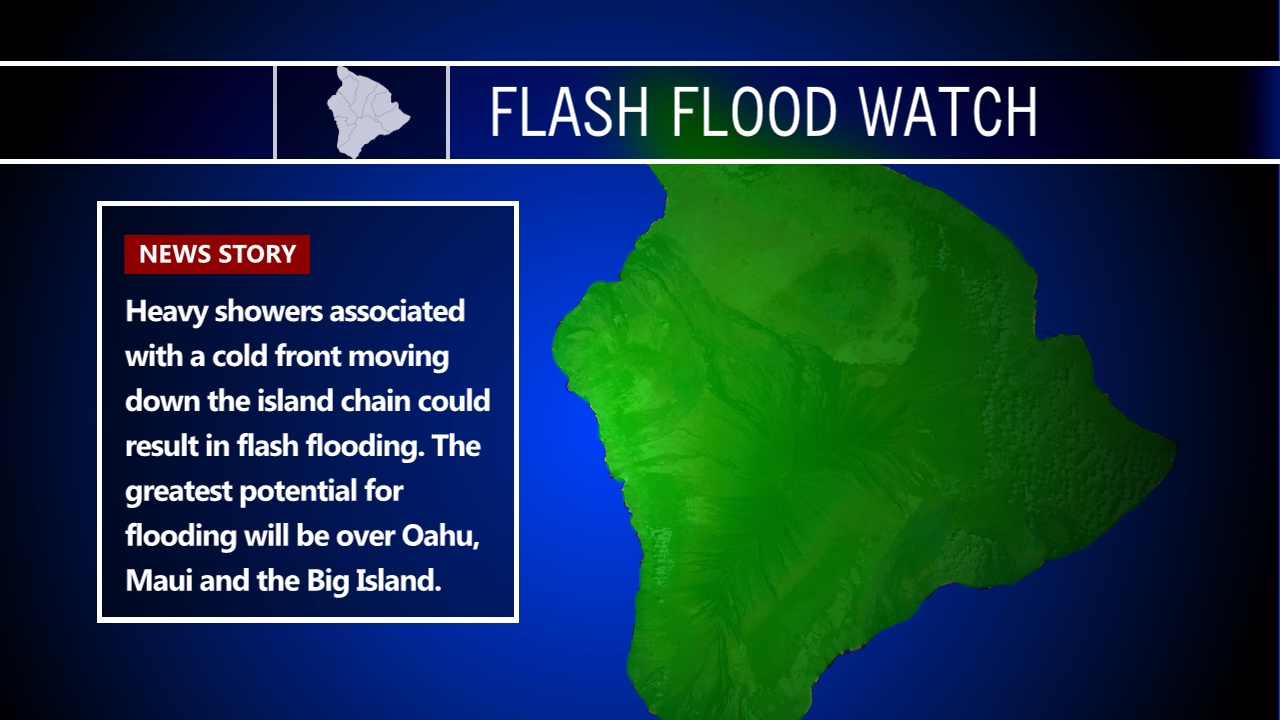 HAWAII ISLAND - Heavy showers and thunderstorms associated with a strong cold front that is forecast to move down the island chain could lead to flash flooding from Monday through Tuesday.

(BIVN) – Hawaii Island is under a Flash Flood Watch and a High Wind Watch today, as a strong cold front moves down the island chain from Monday through Tuesday.

“The front will reach Kauai late Monday with cool and dry air following as it moves down the island chain,” the National Weather Service said on Monday morning. “The front is expected to pass east of the Big Island Wednesday night with dry northeast flow forecast for the second half of the week.”

Heavy showers associated with a cold front moving down the island chain could result in flash flooding. “Heavy rain could become widespread and cause streams to quickly overflow their banks, leading to life threatening flash flooding,” forecasters said in the Watch message.

The Big Island will also face gusty southwest winds ahead of the upper trough moving into the region later today through Tuesday. Wind speeds of 35 to 45 mph with localized gusts over 70 mph are possible along the summits of Mauna Kea and Mauna Loa.

The road to the summit of Mauna Kea is already closed at the Visitor Information Station due to high humidity, heavy fog, below freezing temperatures, and reports of frost on the ground, rangers say.

Winds are forecast to trend down through midweek as the upper trough moves away from the area.

From the National Weather Service forecast discussion posted at 3:49 a.m. HST on Monday:

Animated water vapor imagery showed an amplifying upper pattern across the northern Pacific that was characterized with a building ridge east of Japan and a shortwave trough digging southeastward toward the Hawaiian Islands. The latest surface analysis showed a cold front associated with the upper trough extending southwest to just south of Midway from a developing gale-force low centered around 1000 miles north-northwest of the state. A ridge axis was analyzed extending west-southwest across the islands from 1031 mb high pressure centered over the far eastern Pacific. The early morning radar loop showed patches of heavy showers developing over the waters south of Oahu and Kauai lifting northward. Some of these showers are moving ashore along the leeward coasts of Oahu providing some much needed rainfall this morning.

Rainfall coverage will steadily increase through the day today across the island chain as deep tropical moisture pools northward ahead of the approaching cold front and upper trough. The latest satellite-derived precipitable water (PW) imagery showed a large area of around 2″ values filling in from the south. High-resolution model reflectivities are initializing well with the current radar pattern and depict heavy showers continuing to develop and expanding in coverage along a pre-frontal convergence boundary near Oahu today, then shifting eastward across the eastern half of the state tonight through Tuesday as the front begins to move down the island chain.

Impacts will include: the potential for flash flooding, strong thunderstorms (an isolated severe storm can’t be ruled out), gusty downslope winds mixing down over windward areas (Oahu and Kauai), and the potential for a wintry mix and gusty southwest winds over the summits tonight into Tuesday.

Drier and cooler air with north-northeast flow will fill in across the islands through the second half of the week as the band of deep tropical moisture associated with the front exits to the east of the Big Island. Some lingering moisture can’t be ruled out over the Big Island through this time, if the boundary were to stall. Dewpoints are forecast to reach the 50s over Oahu and Kauai Tuesday through midweek in the wake of the front, then steadily climb back into the 60s through the second half of the week. Winds are forecast to weaken once again over the upcoming weekend as another, slightly weaker, cold front approaches the state.