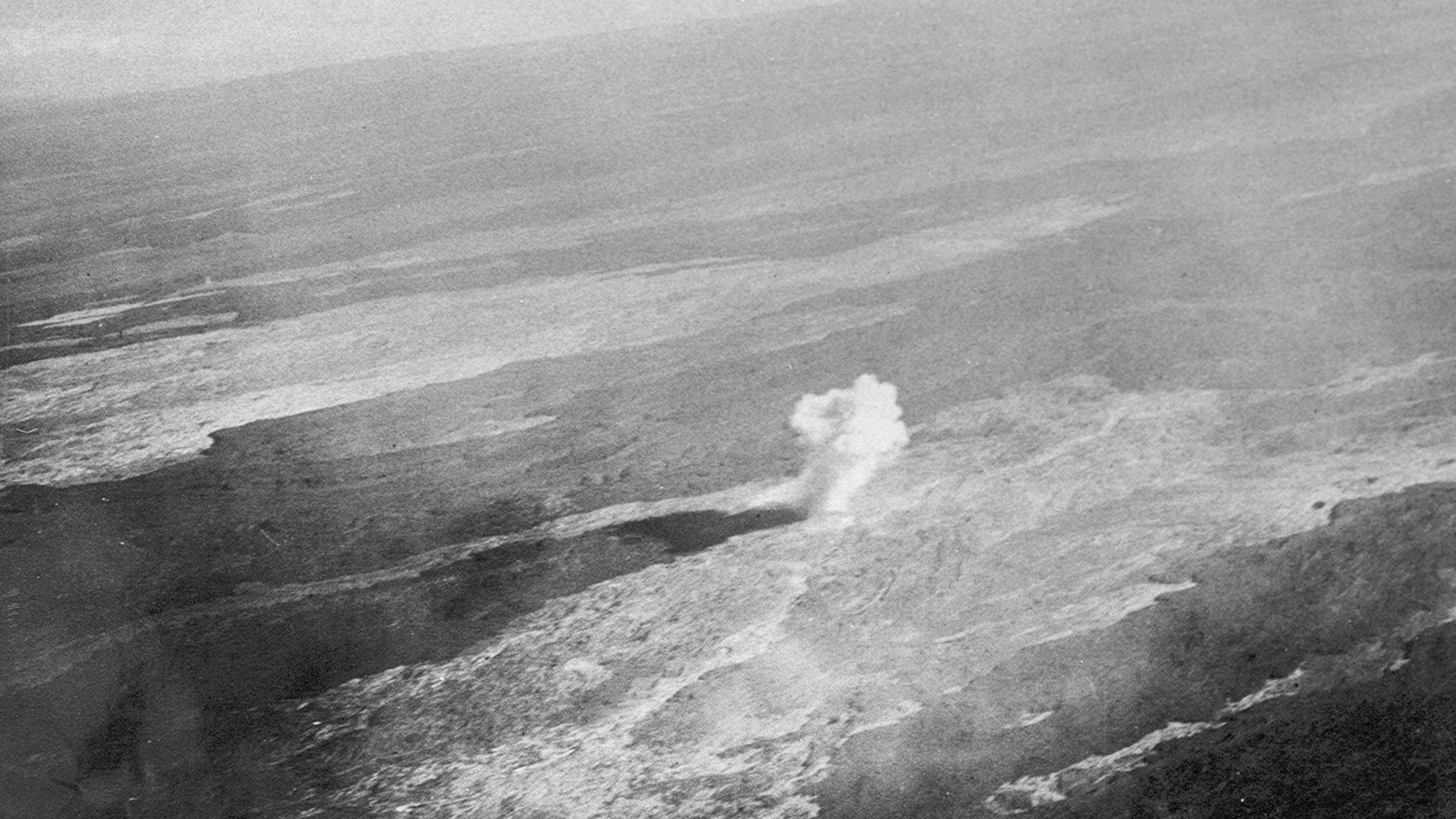 MAUNA LOA, Hawaii - Many believe Thomas Jaggar, founder of the Hawaiian Volcano Observatory, was able to stop a Mauna Loa lava flow in 1935. But is it true?

(BIVN) – Mauna Loa is not erupting, however measured inflation of a magma reservoir beneath the summit and upper Southwest Rift Zone suggest it could one day awaken. When it does, emergency officials will scramble to protect the lives of Hawaii Island residents and visitors, considering all viable options in response. Is diverting or stopping the flow possible?

A widely-held belief is that Thomas Jaggar, founder of the Hawaiian Volcano Observatory, was able to stop a Mauna Loa lava flow in 1935. But is it true?

The eruption in question began on November 21, 1935. Six days later, an unusual breakout at an elevation of 8500 feet on the north flank of Mauna Loa sent ʻaʻā lava to the north. Pāhoehoe lava ponded at the base of Mauna Kea for two weeks before advancing toward Hilo at a rate of about 1.6 km/day (1 mile/day).

On December 23, fearing that the flow would reach the headwaters of the Wailuku River, which supplied water for the town of Hilo, Jaggar called on the Army Air Service, based on Oʻahu, to bomb the lava flow source. His hope was that the lava tubes or channels could be destroyed, thereby robbing the advancing flow while feeding another flow that would re-cover the same area. The flow was bombed on December 27, and lava stopped flowing during the night or early morning of January 2, 1936.

Jaggar publicly praised the Army for its responsiveness and technical accuracy in delivering the bombs to his selected targets. In turn, Jaggar was praised for his successful experiment and saving Hilo.

What is not widely known is that a USGS geologist, Harold Stearns, was on board the last plane to deliver bombs to Jaggar’s targeted areas. Stearns had been mapping the geology and water resources of Maui volcanoes. But when he heard about the plan to bomb the lava flow on Mauna Loa, he traveled to Hilo to see if he could fly with the Army.

Stearns got his chance. At 12:40 p.m. on December 27, his plane dropped two 600-pound bombs (each with 300 pounds of TNT), but they hit a few hundred feet from their target. Jaggar himself watched the bombing through a telescope from the base of Mauna Kea.

Assessing Jaggar’s bombing goals, Stearns said, “The tube walls look 25 to 50 feet high and deep in the flow so that I think there would be no change of breaking the walls. The lava liquid is low. The damming possibility looks effective but the target is too small.”

Following up with a letter to Jaggar in January 1936, Stearns questioned the effectiveness of the bombing.

Jaggar wrote back that later examination of the flow’s source showed that “This channel was broken up by the bombing and fresh streams poured over the side of the heap…. I have no question that this robbing of the source tunnel slowed down the movement of the front…. The average actual motion of the extreme front … for the five days after the bombing was approximately 1000 feet per day. For the seven days preceding the bombing the rate was one mile per day.”

Jaggar then asked the rhetorical question, “How long would the flow have lasted without bombing it?” He used the 1919-1920 Kīlauea eruption, which sent lava into the Kaʻū Desert to form Mauna Iki, as an analogue. “If we had bombed Mauna Iki in February 1920, the pahoehoe tunnel system would never have reached the lower Kau desert….”

Stearns remained unconvinced. In his 1983 autobiography, he wrote about bombing the Mauna Loa flow: “I am sure it was a coincidence….”

The day after the bombing, Wingate wrote to the Army commanders, “Though we are as yet unable to determine what effect the airplane bombardment achieved … I feel very doubtful that it will succeed in diverting the flow. Therefore, I am … reconnoitering the flow region and will try to locate a feasible spot on the ground where a land expedition might successfully attack the flow channel by dynamiting or other methods.”

In Wingate’s December 1935 report, he summarized the effort: “Just what part the bombardment had in stopping the lava flow the superintendent is not qualified to say. Certainly the facts are most interesting and Dr. Jaggar believes the experiment to have played a definite part.” 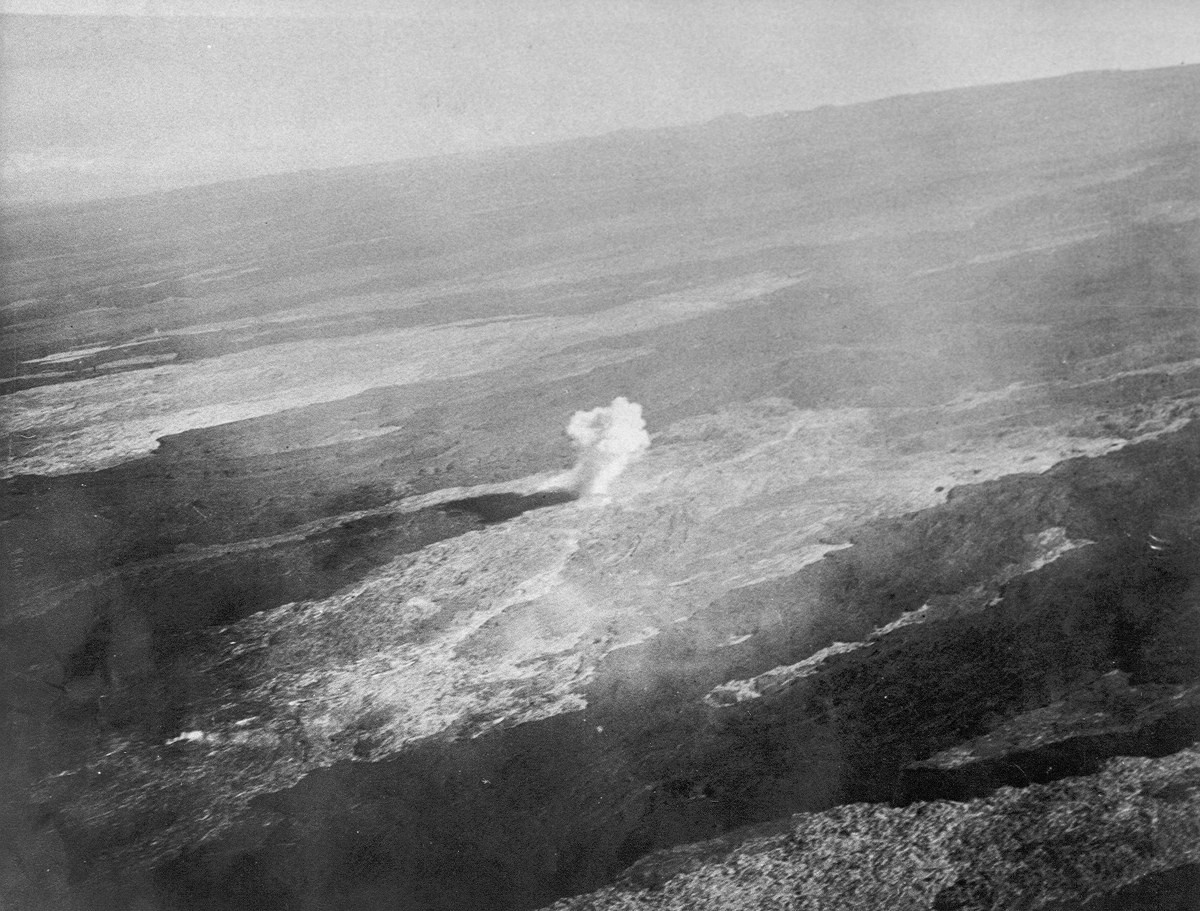 Aerial view of a bomb detonating on Mauna Loa near the 8500-foot elevation source of the 1935 lava flow on the morning of December 27, 1935. This was one of twenty 600-pound bombs dropped on the lava flow that morning by the Army Bombing Squadron from Luke Field, O‘ahu. Photo by Army Air Corps, 11th Photo Section.