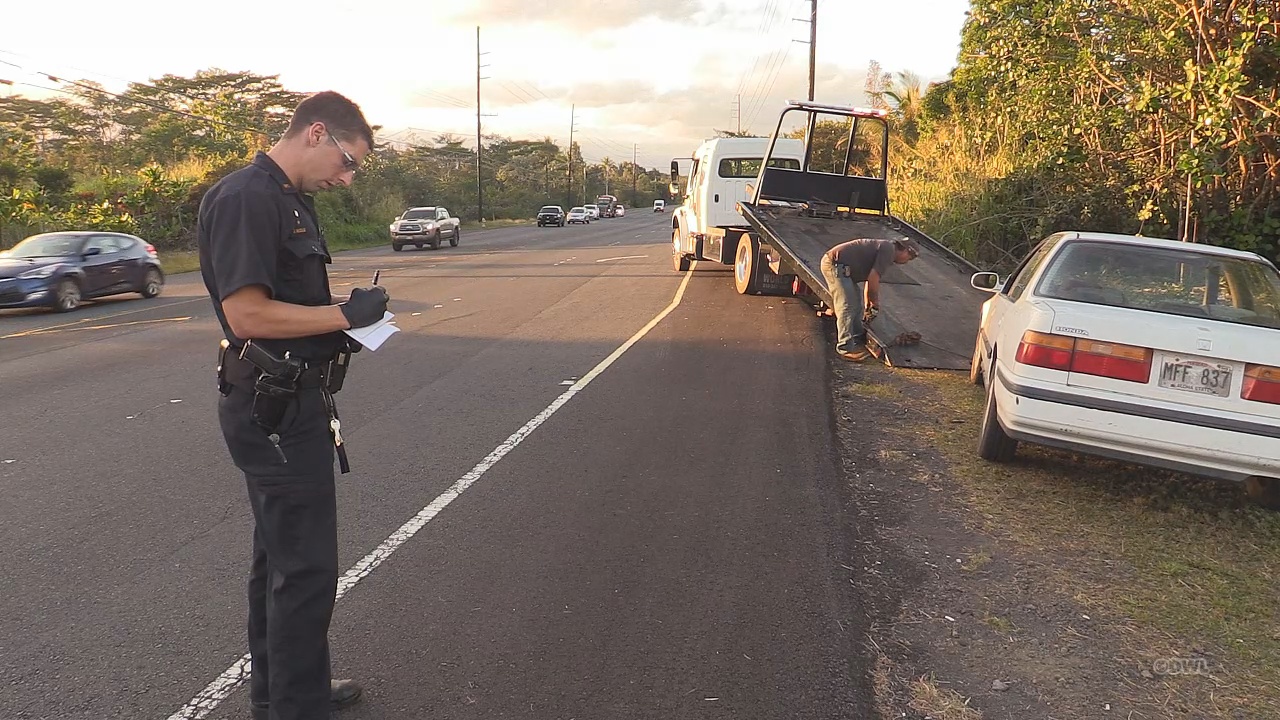 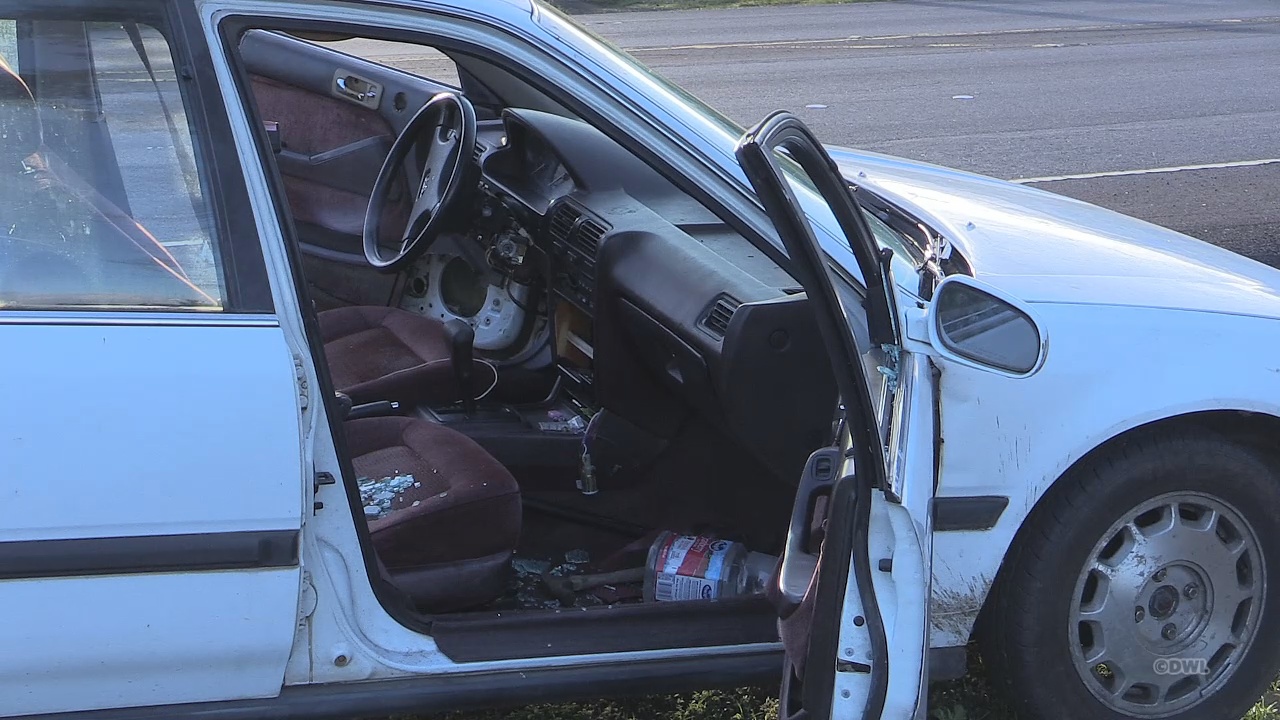 A look inside the car driven by the arrested suspects, which was stopped on Highway 130 on Wednesday. Image from video by Daryl Lee.

(BIVN) – Two more suspects in an alleged Hawaiian Beaches kidnapping were arrested on Wednesday, following the apprehension of a third suspect the day before, police report.

On Wednesday, police arrested 26-year-old Nikki Nasario and 25-year-old Joshua Sosa during a traffic stop on Highway 130 near the Ainaloa Boulevard intersection in Pāhoa. Police were investigating the car, which appeared damaged, and the surrounding evidence before the vehicle was towed away.

The day before, police nabbed 32-year-old Claude Carvalho Jr. after locating the burnt remnants of the suspect’s vehicle at the Lava Tree State Park.

At 12:31 p.m., (December 30), officers responded to a call of a kidnapping from a Heʻe Street address in Hawaiian Beaches. Witnesses reported that a 31-year-old woman staying at the residence was struck in the face with a tire iron before being forced into the trunk of a sedan at gunpoint. The suspect’s vehicle was described as a maroon 1998 Toyota sedan with a shattered rear window bearing license plate HCD 702.

34-year-old Paul Alisa of Pāhoa was arrested that same afternoon when he turned himself into the Pāhoa Police Station. He was later released from custody pending further investigation.

The victim was found later that afternoon when she was dropped off at the Heʻe Street residence. She was taken by ambulance to the Hilo Medical Center where she was treated and released for non-life threatening injuries.

At 12:11 p.m., Tuesday, (January 2), police located the burnt remnants of the suspect’s vehicle at the Lava Tree State Park in Pāhoa.

At 5:30 p.m., that afternoon, detectives arrested 32-year-old Claude Carvalho Jr. in connection with this incident after he was taken into custody for unrelated bench warrants. Later that evening, Carvalho Jr. was released pending further investigation for this case but remained in police custody for his warrants until making his initial appearance on Wednesday afternoon, (January 3), in District Court.

At 2:15 p.m., Wednesday, (January 3), 26-year-old Nikki Nasario and 25-year-old Joshua Sosa were arrested for this incident and their outstanding warrants following a traffic stop on Highway 130 near the Ainaloa Boulevard intersection in Pāhoa. Sosa is being held at the Hawaiʻi Community Correctional Center on a parole violation warrant, and Nasario is currently being held at the Hilo cellblock while detectives from the Area I Criminal Investigation Section continue the investigation.

Anyone who may have information about this incident is asked to call the Police Department’s non-emergency line at (808) 935-3311 or Detective Todd Pataray of the Area I Criminal Investigation Section at (808) 961-2382 or Todd.Pataray@hawaiicounty.gov. 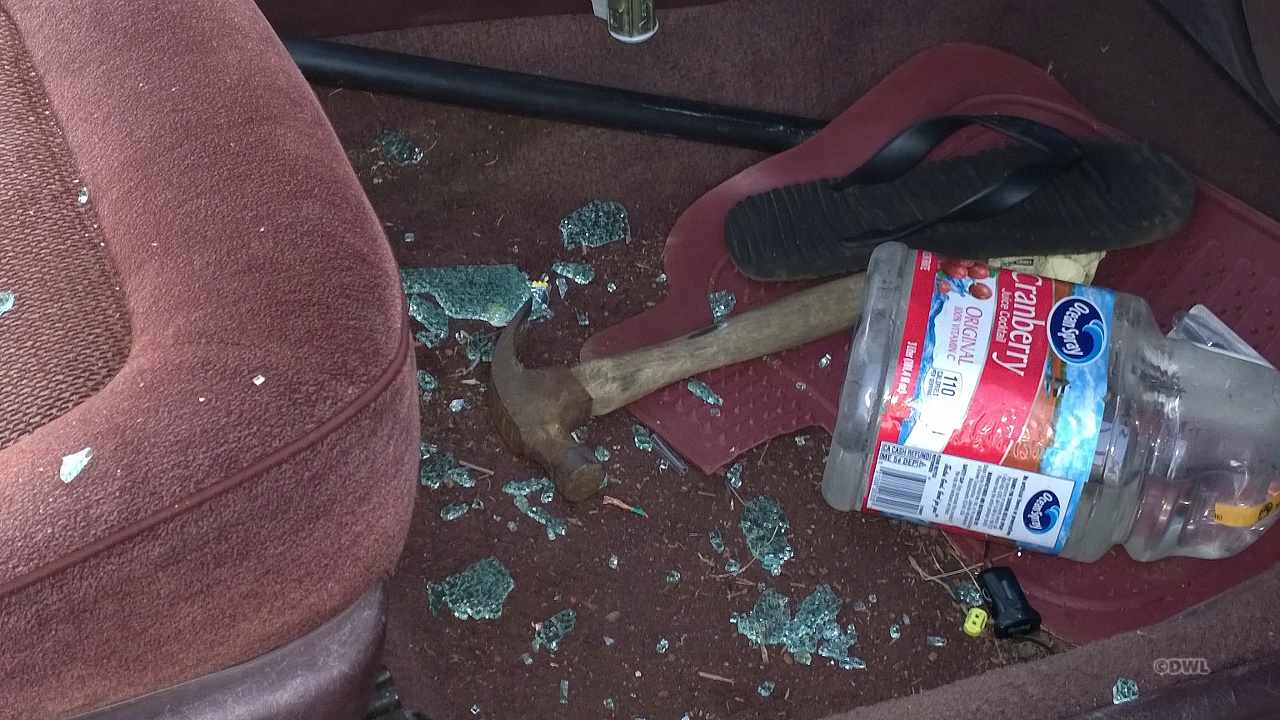 A hammer and shattered glass on the floor inside the car driven by the arrested suspects on Wednesday. Image from video by Daryl Lee