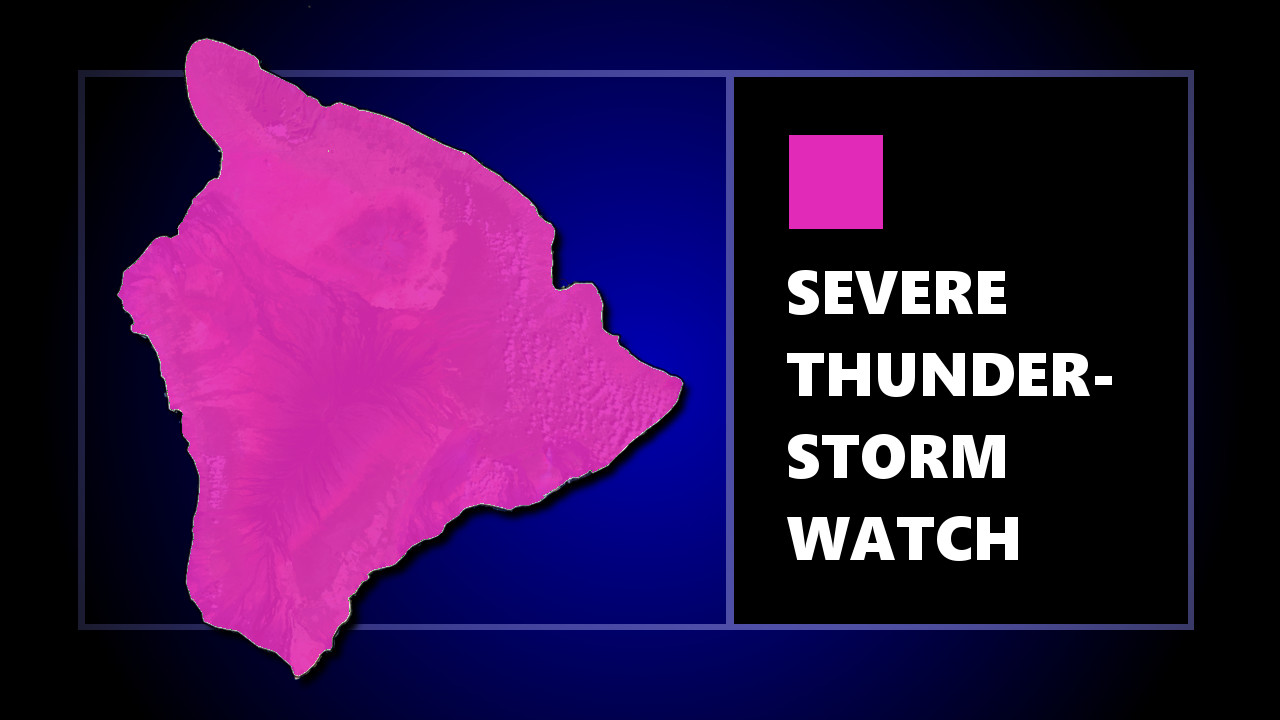 HAWAII ISLAND - A line of strong thunderstorms over waters to the northwest and west of the Big Island, moving east at 15 to 20 mph.

UPDATE (6 a.m.) – The Severe Thunderstorm Watch is no longer in effect. A Flash Flood Watch remains in place.

UPDATE (10 p.m.) – The National Weather Service in Honolulu has issued a Severe Thunderstorm Warning for the South Kohala area of Hawaii County until 10:30 p.m. HST

Hail damage to vehicles is expected.

At 10:09 p.m. HST, radar indicated strong to severe thunderstorms moving over the Big Island from the west, producing torrential rainfall over the leeward Kohala and Kona districts. Rain was falling at a rate of up to 3 inches per hour. Additional heavy showers are expected to move in from the west over the next couple of hours.

(BIVN) – The National Weather Service in Honolulu has issued a rare Severe Thunderstorm Watch for the entire Big Island of Hawaii until 3 a.m. Tuesday.

According to a Special Weather Statement issued just after 9 p.m., forecasters warned strong thunderstorms and gusty winds are heading towards Hawaii Island:

At 905 PM HST, radar indicated a line of strong thunderstorms over waters to the northwest and west of the Big Island, moving east at 15 to 20 mph. These storms extended from the Alenuihaha Channel to about 20 miles west of Honaunau. As these storms move over the Big Island, wind gusts of 50 to 55 mph are possible, as well as frequent dangerous lightning, and torrential downpours reducing visibility to near zero.

Frequent cloud to ground lightning is occurring with this storm, the National Weather Service warned, adding that “lightning can strike 10 miles away from a thunderstorm. Seek a safe shelter inside a building or vehicle.”

A Flash Flood Watch remains in effect for Hawaii Island, while the summit areas of Mauna Kea and Mauna Loa are under a Winter Weather Advisory. Mixed precipitation and snow expected. “Plan on slippery road conditions,” forecasters said. “Snow accumulations of up to 3 inches are possible.”