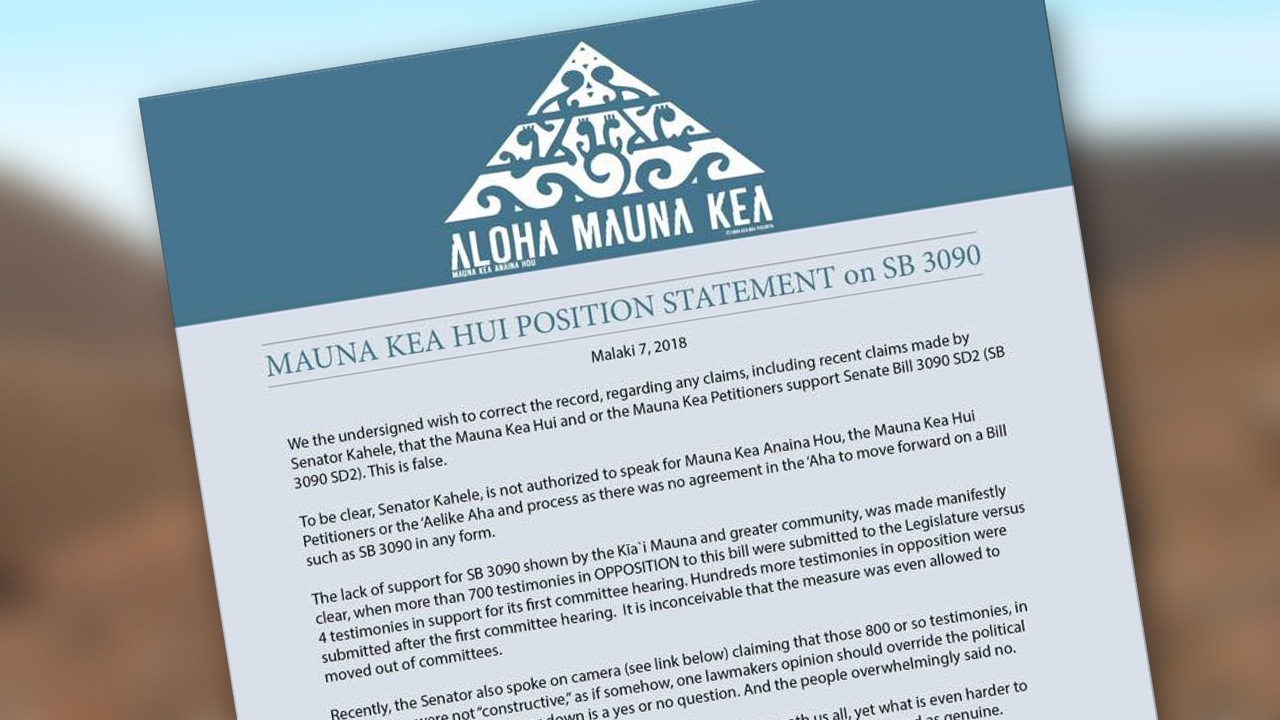 HILO, Hawaii - There was never any agreement during the ‘Aelike ‘Aha process to move forward on something like Senate Bill 3090, the hui says.

(BIVN) – The Mauna Kea Hui, a group opposed to further development on the Hawaiʻi Island mountain, has issued a position statement on a senate bill that would dramatically alter the way Mauna Kea is managed.

SB 3090 SD 2, passed by the State Senate on third reading Tuesday, would establish the Mauna Kea Management Authority, taking the responsibility away from the University of Hawaiʻi which currently holds the master lease for the summit area.

The bill has been widely opposed by those both in favor of and opposed to the proposed Thirty Meter Telescope. The Office of Hawaiian Affairs came out in support of the bill after it was amended.

The Mauna Kea Hui, however, takes issue with the fact that the bill was even introduced in the first place. As the position statement details, they see the proposal as a violation of the ‘Aelike ‘Aha process they entered into with Senator Kai Kahele and others, before the legislative session began.

Here is the text of the statement:

We the undersigned wish to correct the record, regarding any claims, including recent claims made by Senator Kahele, that the Mauna Kea Hui and or the Mauna Kea Petitioners support Senate Bill 3090 SD2 (SB 3090 SD2). This is false.

To be clear, Senator Kahele, is not authorized to speak for Mauna Kea Anaina Hou, the Mauna Kea Hui Petitioners or the ‘Aelike Aha and process as there was no agreement in the ‘Aha to move forward on a Bill such as SB 3090 in any form.

Recently, the Senator also spoke on camera (see link below) claiming that those 800 or so testimonies, in his opinion, were not “constructive,” as if somehow, one lawmakers opinion should override the political will of the people. A vote up or down is a yes or no question. And the people overwhelmingly said no.

Further such comments made about voters and their votes is beneath us all, yet what is even harder to imagine is how any community meetings being called now should or could be viewed as genuine.

Senator Kahele and other lawmakers have already categorically dismissed a total of over 900 votes made by the very community that they now claim to want to hear from.

Despite, the Senator’s missteps and or misunderstandings, we continue to reject SB 3090. Many do not understand how our story begins. A few months ago, we were approached by Senator Kahele to begin, what we understood was to build upon the Mauna Kea Temple Report commissioned by the Royal Order and written by Mauna Kea Anaina Hou 17 years ago, as a plate-form for discussions around the
mismanagement of Mauna Kea.

The meetings were set under strict rules and protocols of engagement. The two major rules were (1) that no discussion on the TMT was allowed because of the fact that our case was in the Supreme Court, and (2) that the ‘Aelike process was to be used to build consensus on the topics of our discussions.

For those not familiar with the ‘Aelike process, it is a Hawaiian process for building consensus and it is especially useful in cases where there is contention around the issues. While we used a hybrid version of the process the main principles where adhered too. These principles help build trust and protection against abuse such as what we see here today.

Needless to say, we were shocked to learn, that even after three ‘Aelike ‘Aha with all attendees in 100 percent agreement NOT TO SUBMIT A BILL TO CREATE AN MANAGEMENT AUTHORITY at this time, that Senator Kahele via Senator Dela Cruz, had in fact, broken the ‘Aelike and our trust by doing the exact opposite by submitting SB 3090 anyways.

SB 3090 represents the violation of trust of those of us who agreed to sit in the Aha to have such discussion in the first place. We have no explanation for the Senators actions and can offer only that perhaps he did not understand the spiritual or cultural commitment involved in ‘Aelike and or involved in caring for the Mauna. We are not the judge or jury and while we speak sternly, we speak the truth that is meant to heal and that is Aloha!

But we never intended to change our long-held positions that are expressly outlined in the Report. The first of which is NO FURTHER DEVELOPMENT. One of three non-negotiable conditions and righteous positions of the Report given the history and the physical limits of the Mauna.

SB 3090, does not protect the Mauna from further desecration or destruction. This measure, therefore is fatally flawed and should not be supported.

We do however. support the following actions:

(1) SB 3090 has no support and it should have been “killed” from the beginning and we support it being “killed” now.

(2) A financial and forensic Audit measure (58 757 and SCR29) is something we do support for the purpose of establishing “fair market” lease rents for the Observatories to pay as a way to offset the costs to state Taxpayers. Rent can’t be properly assessed if all such funds are not being recorded on the public ledger, and finally,

(3) Lawmakers and OHA Board of Trustees should wait for the Supreme Court to rule on the TMT Conservation District Use Application (CDUA) and the TMT Sub-Lease Case, that after so many years, are now before the Court. It is never a good idea to use the legislature to alter or to undermine good law (law found to be constitutionally sound), so we support moving forward in compliance with the laws that protect Mauna Kea for real not just to create the illusion of protection.