PAHOA, Hawaii - Concerns persist over the handling of pentane, the flammable substance used as a working fluid at the power plant. 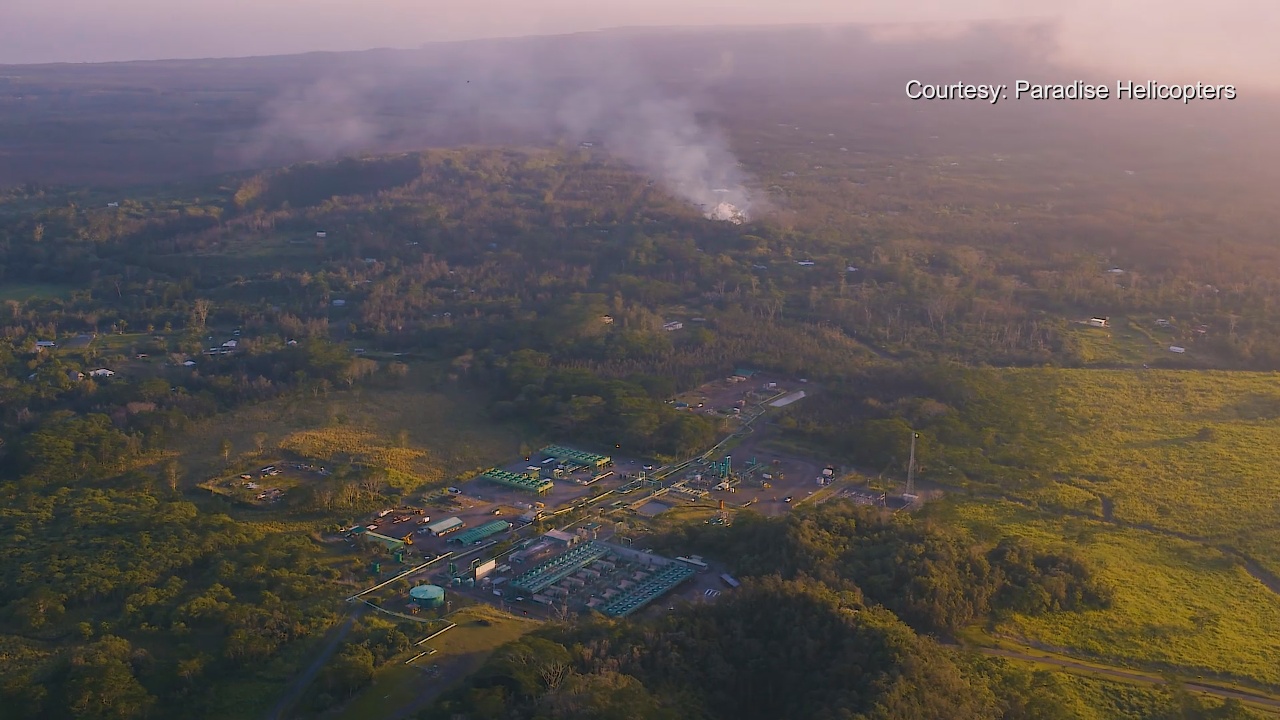 Puna Geothermal Venture in the foreground, lava fissures seen in the background.

(BIVN) – Concerns that the ongoing volcanic eruption in Leilani Estates could impact the Puna Geothermal Venture, adding another layer of danger to an already perilous situation, were expressed openly during a public meeting held in Pahoa Friday evening.

PGV representative Mike Kaleikini spoke to the anxious crowd, many of whom were under the duress of having to evacuate their homes due to the lava fissures and sulfur dioxide emissions breaking out in their neighborhood. Fears in the community persist that the volcanic fissures will make their way to the industrial, energy production facility with disastrous results.

On August 7, 2014, strong winds from Hurricane / Tropical Storm Iselle knocked down trees and caused the geothermal plant to trip offline, resulting in the “unabated release of 39 pounds of hydrogen sulfide“, which many nearby residents say impacted their health.

Kaleikini told the packed Pahoa High School cafeteria that “once the earthquakes increased … we decided to shut down some of our equipment, preemptively. We notified Civil Defense.”

“As soon as the first cracks appeared in Leilani and on Pohoiki Road, we proactively went ahead and shut down additional equipment,” Kaleikini said. “The equipment where I’m referring to is actually about the same level as where Leilani is.”

“Pentane is a hydrocarbon, which is flammable just like propane,” Kaleikini said, “and so we shut that down. We inventoried it. We moved it out of the inundation zone. And as soon as the first reports of lava was spewing, what we did next was shut down the entire plant.”

Kaleikini said the “first confirmation of lava spattering was around 4 pm yesterday. So we were able to take the plant offline by around 7 pm.”

“Everything is secure,” Kaleikini told the crowd. “All of our geothermal wells are shut in. We’ve got it covered up with cinder. And we have our crews just monitoring because the cracks are across the road from us. It’s a little bit down towards Pohoiki, but it can go anywhere, so we are on heightened alert. Everything shut in.”

“We’ve been receiving reports that there’s been explosions and blow-ups at PGV,” Kaleikini said. “That is simply not the case. That’s social media. That’s the fake news. But because the fissures are adjacent to us, one could easily think or suspect – because you see the plume from a distance, that ‘oh my gosh, it’s PGV’ – but that’s not the case.”

Some in the crowd were not satisfied with the explanation for the handling of the pentane at the site. The flammable substance is used as a working fluid in the facility’s electricity producing turbines, the Environmental Protection Agency says. In January 2016, EPA fined the plant for Clean Air Act chemical safety violations, which included the use and handling of the pentane, including a requirement to “analyze and report on a worst-case release scenario and estimate the population that would be affected by an accidental release of pentane.”

The EPA says PGV has since “complied with the rules designed to minimize accidental chemical releases,” and that PGV agreed to pay a civil penalty of $76,500.

One resident pressed officials at the Pahoa meeting about the pentane, which he fears may have been moved out of the inundation zone but not out of the volatile East Rift Zone. Civil Defense administrator Talmadge Magno answered that if the handling is “within the industrial guidelines for that product”, then it is out of his authority.

Mayor Harry Kim then stepped in and took the microphone. “I’m gonna address the question,” the mayor said. “Anyone who’s been here since 1980’s, 90’s, 2000, I know some of the emotions of the geothermal. I’ll ask you to trust me on this.”

“They’re in complete shutdown,” Mayor Kim said. “Obviously, I trust them on the shutdown, but I don’t trust them as far as just taking their word for it.”

“We will assure you that Civil Defense, Department of Health, will monitor this institution of the geothermal, and ensure that whatever hazard is created, it is not by geothermal,” the mayor said. “They are in the process of removing all flammable materials, and if it’s inadequate, then we’ll move it from there. It is on a shut down.”

“Our job is to mitigate the hazard and risk to you, and we will do our job,” Mayor Kim said.