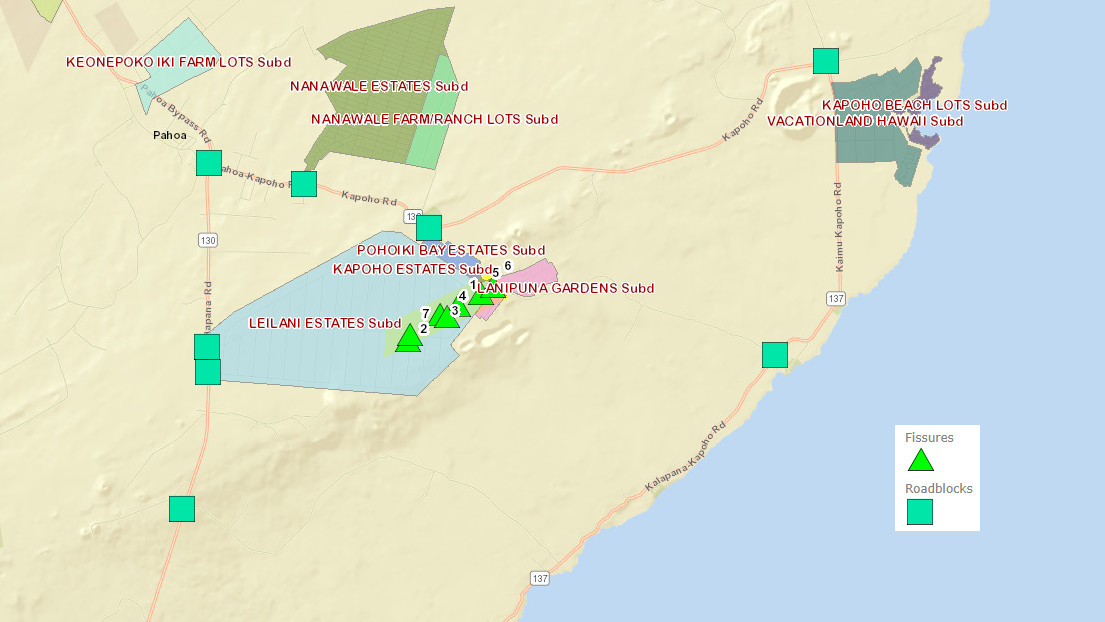 screen grab of the map by the County of Hawaii

(BIVN) – In a 11:45 p.m. update, the USGS Hawaiian Volcano Observatory reported the intermittent eruption of lava in the Leilani Estates subdivision in the lower East Rift Zone of Kīlauea Volcano continues.

Early this morning, USGS said new ground cracks were reported on Highway 130, but no heat or escaping steam was subsequently observed.

“Fissure 7 stopped erupting in mid-afternoon,” scientists wrote. “A new fissure erupted this evening near fissures 2 and 7, and lava fountains reached as high as about 70 m (230 ft).”

Seismicity and deformation are consistent with continued accumulation of magma within the rift zone, USGS says.

Scientists also provided this update on the Kīlauea Volcano summit:

Tiltmeters at the summit of Kīlauea Volcano continue to record the deflationary trend of the past several days. Satellite InSAR data show that between April 23 and May 5, 2018, the summit caldera floor subsided about 10 cm (4 in). Corresponding to this deflationary trend, the summit lava lake level in Overlook crater has dropped about 128 m (518 ft) below the crater rim since April 30. Rockfalls from the crater walls into the retreating lake produced ashy plumes above Halemaumau crater today, resulting in light ashfall in the summit area. Rockfalls and ashy plumes are expected to continue as the lake level drops.

Meanwhile, Hawai‘i County officials have put together a new map that features the locations of volcanic fissures, road blocks, and subdivisions in the Puna area. An example can be seen above, but the link to the actual resource is here.