LEILANI ESTATES, Hawaii - The USGS Hawaiian Volcano Observatory confirmed hazardous fumes continue to be released but no volcanic activity is present at this time. 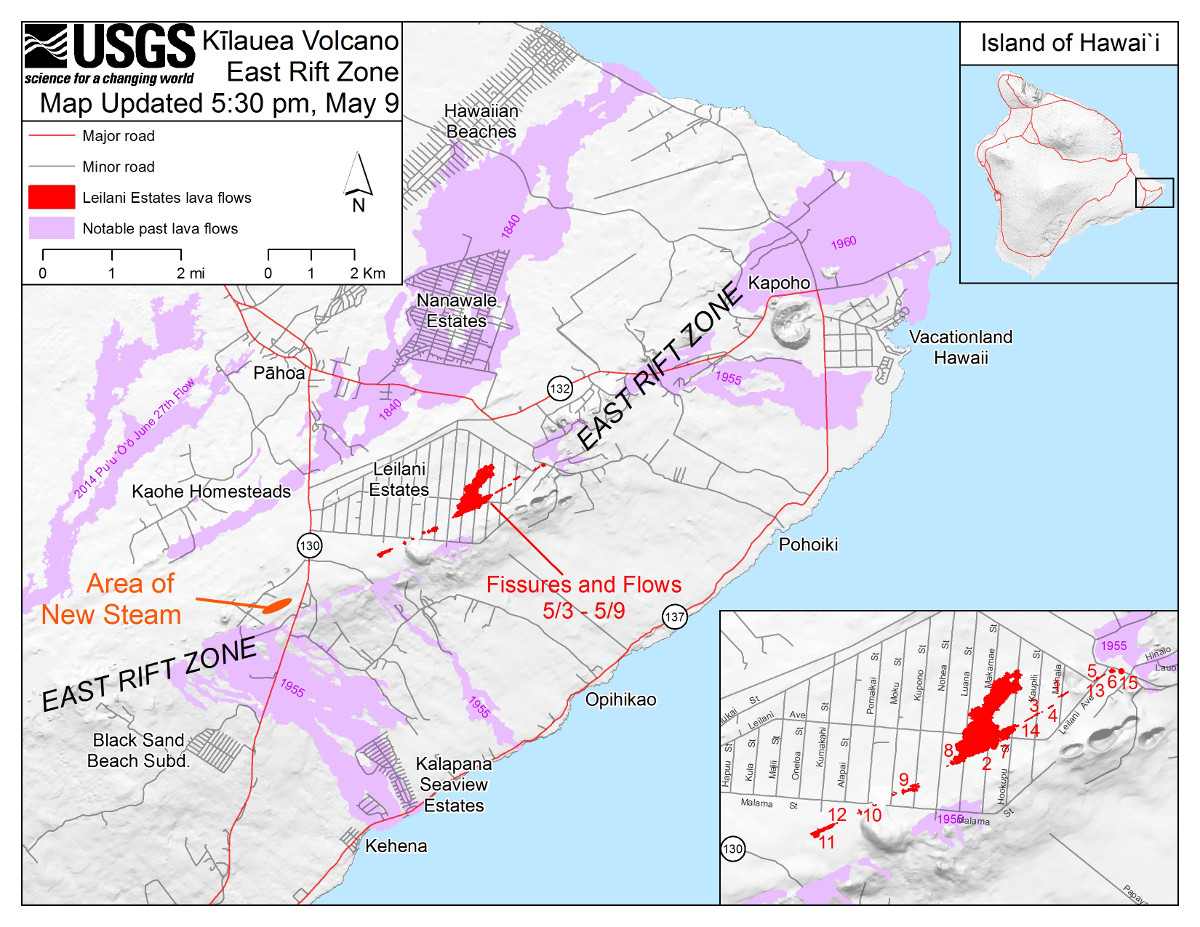 This USGS map shows the locations of fissures and an ‘a’ā flow erupted since May 3 in the order that they occurred in Leilani Estates as of 5:30 p.m. HST, May 9. Note the area of heavy steaming from ground cracks that began earlier this afternoon, located west of Highway 130. The purple areas are lava flows erupted in 1840, 1955, 1960, and 2014-2015.

(BIVN) – Here is the latest from Hawaii County Civil Defense at 6 p.m., supplemented by multi-media and updates from other agencies.

Hawaiian Volcano Observatory (HVO) confirmed hazardous fumes continue to be released but no volcanic activity is present at this time. So far in this eruption, 15 fissures have opened, covering 117 acres and destroying 36 structures. According to HVO at 6:51 p.m.:

While no lava was noted erupting today from any of the 15 fissure vents formed thus far, earthquake activity, ground deformation, and continuing high emission rates of sulphur dioxide indicate additional outbreaks of lava are likely. The location of future outbreaks is not known with certainty, but could include areas both uprift (southwest) and downrift (northeast) of the existing fissures, or resumption of activity at existing fissures.

Earthquake activity was high in the area today. Continuing ground deformation and located earthquakes were mostly in the area around and northeast of Fissure 15 at Pohoiki Road indicating that the intrusion is migrating further to the northeast. Steaming ground cracks in the vicinity of Highway 130 continue.

Civil Defense Recovery Information and Assistance Center (RIAC) at the Sacred Hearts Church in Pāhoa, Monday to Friday from 9 a.m. to 3 p.m.

Four charter schools on Hawaiʻi Island will be closed tomorrow, Friday, May 11, due to the volcanic and seismic activity. They are: