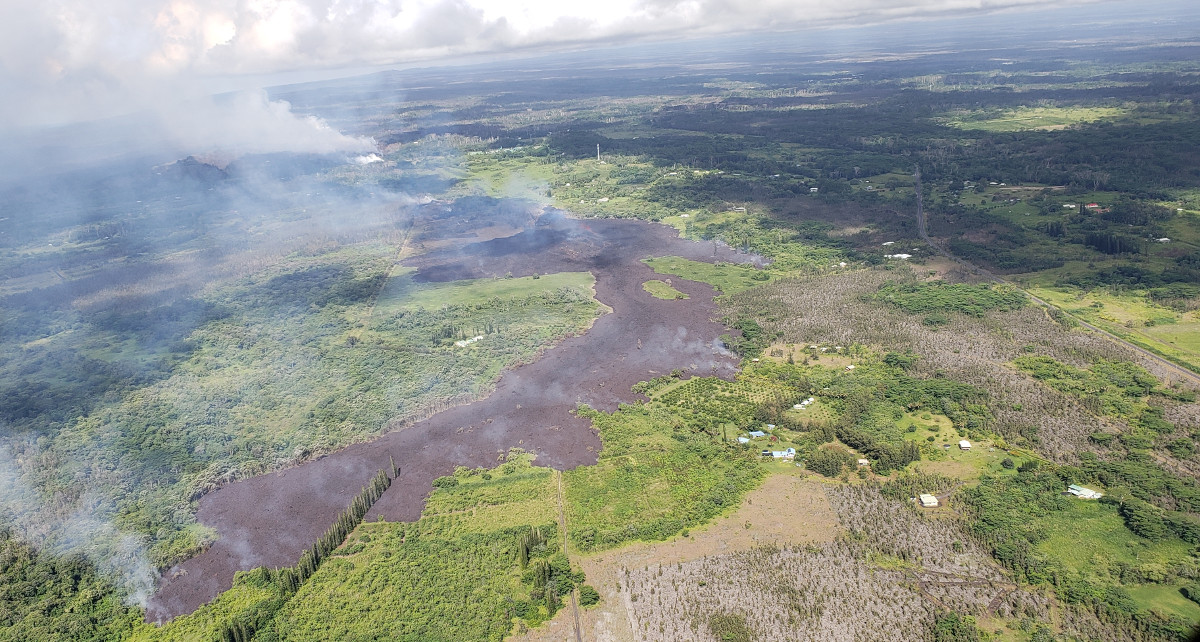 (HFD via USGS) Aerial view of the active ‘a‘ā flow spreading from fissure 17. Highway 132 can be seen on right side of photograph.

6 am Eruption Update – Lava Flow Has Not Advanced

PUNA, Hawaii - Several fissures on the lower East Rift Zone are still active, but the lava flow from fissure 17 has not advanced since yesterday.

(BIVN) – The ongoing volcanic eruption continues on the lower East Rift Zone of Kilauea, while a plume of ash continues to emit from Halema’uma’u crater at the volcano summit.

Several fissures on the lower East Rift Zone are still active, Hawaii County Civil Defense reported this morning, but the lava flow from fissure 17 has not advanced since yesterday.

The Aviation Color Code for Kilauea was changed from Orange to Red on Tuesday. The new Volcanic Activity Notice issued by the USGS Hawaiian Volcano Observatory.

The National Weather Service has maintained an Ash Advisory for the Kaʻū district. The advisory will be in effetc until 8 a.m. today and “will be re-evaluated after sunrise and may need to be extended if volcanic ashfall persists.”

Hawaii Fire Department reports that air quality is condition RED around fissures in the southeast area of Lanipuna Gardens and surrounding farm lots on Pohoiki Road, Hawaii County Civil Defense says. Condition RED means immediate danger to health so take action to limit further exposure. Severe conditions may exist such as choking and inability to breathe. Sulfur Dioxide (SO2) gas from fissures is especially dangerous for elderly, children/babies and people with respiratory problems.

According to the county, Highway 130 is open beyond Malama Street for local residents only. The Hawaii Police Department reports no large trailers or heavy equipment will be allowed over the metal plates.

Highway 132 is closed at Pohoiki Road intersection and a checkpoint is located on Highway 130 by Pahoa High School, civil defense says. Only local traffic allowed beyond all roadblocks.

“As a precautionary measure, residents of lower Puna are advised to be on the alert in the event of possible gas emissions and volcanic eruption,” civil defense stated. “Because there may be little to no advance notice to evacuate, you should be prepared to evacuate at short notice. Take this time to prepare.”