HAWAII ISLAND - The Kapoho lava delta is over 100 acres, micro-shelters to be blessed, and a meeting on pets in the eruption evacuation area will be held today. 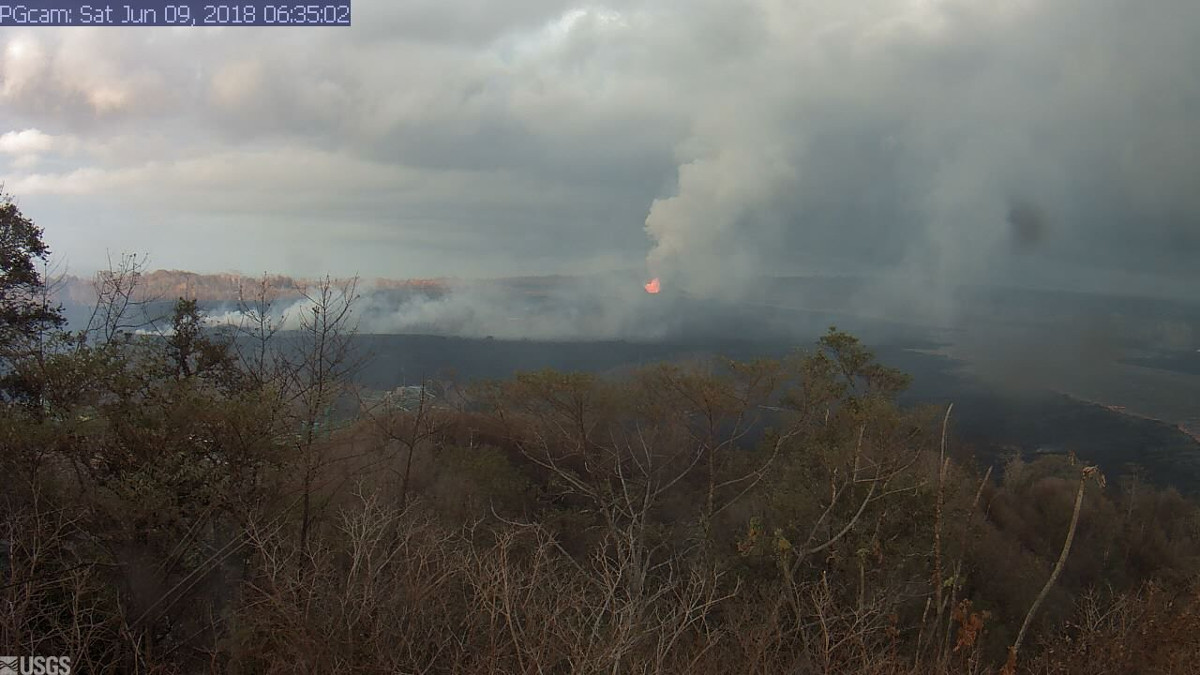 The new delta being created by lava flows in the Kapoho area is expanding rapidly, and was well over 100 acres as of Friday evening, the USGS Hawaiian Volcano Observatory reports. As of 10:49 p.m. Friday HST:

Lava continues to erupt from Fissure 8, with vigorous fountains reaching heights of about 200-220 feet. Observers on the late afternoon overflight reported no significant changes in the Fissure 8 flow field, which continues to supply lava to the ocean entry at Kapoho. Two vigorous steam plumes are rising from the ocean flow front and being blown inland. Strong thermal upwelling was noted in the ocean extending up to 1000 yards out to sea from the visible lava front.

Activity At Other Fissures

UPDATE (10 a.m.) – Fissure 22 was incandescent and there was minor lava activity at Fissures 16/18 this morning while the fuming from Fissures 24, 9 and 10 was less than observed yesterday, USGS reported Saturday morning.

Observations are also collected on a daily basis from cracks in the area of Highway 130, USGS reports. No changes in temperature, crack width, or gas emissions have been noted.

A small explosion occurred at Kīlauea’s summit at 4:48 a.m. HST. The Pacific Tsunami Warning Center reported the event as Magnitude 5.2, but the USGS Hawaiian Volcano Observatory said the shaking was equal to a Magnitude 4.3. The event was “felt in Volcano area and as far away as Hilo,” the geologists reported, adding that “ashfall may impact communities in south part of island.” The explosion was typical of past events, USGS says.

Due to the current volcanic activity, Hawaii County Civil Defense repeated the following policies are in effect: 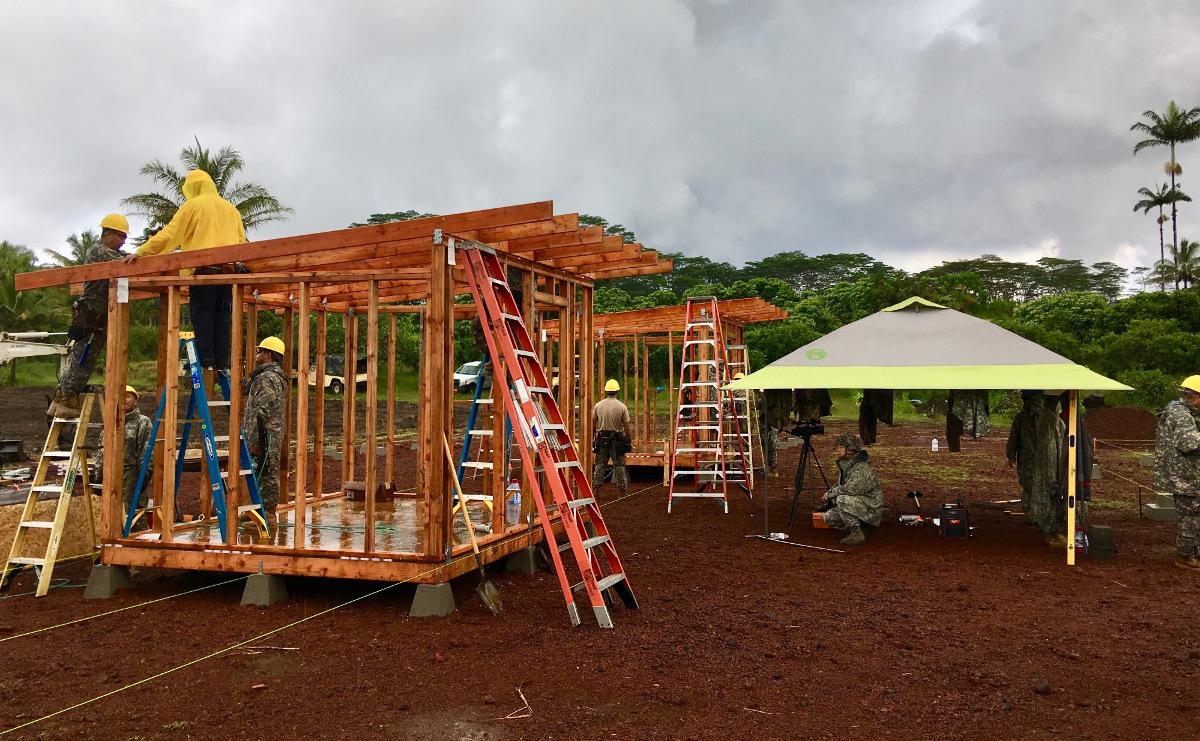 No Animals Left Behind

A public meeting focused on pets in the time of the volcanic eruption will be held at the Pana’ewa Zoo Main Pavilion on Saturday. According to the Hawaii Island Humane Society:

Even with the best upfront planning, the unpredictability of the Kilauea Volcano eruption and lava flow has left affected residents with difficult decisions on what to take when they evacuate and what to leave behind. Sometimes, animals and pets get left behind.

Hawaii Island Humane Society (HIHS) has been working with State, County and Federal officials since the eruption began in early May and has witnessed firsthand the impacts to the people, families and pets affected by the lava flow.

HIHS staff has been on the ground seven days a week throughout the eruption and going door-to-door in search of animals and pets. In addition, State, County and Federal officials notify HIHS of pet and animal sightings and HIHS is also in communication with helicopter pilots who can spot things from the air that may be difficult to see at the ground level.

Given the devastating effects of the ongoing eruption on the lower Puna community, Hawaii Island Humane Society reached out to the American Society for the Prevention of Cruelty to Animals (ASPCA) to support HIHS efforts in providing an independent assessment of the areas affected by the eruption, communication from local disaster officials and collaborative efforts moving forward. ASPCA was receptive and a two-person team headed up by ASPCA Senior Director for Disaster Response Dr. Dick Green and Joel Lopez arrived on island yesterday.

Dr. Green suggested that a public meeting be called for tomorrow, Saturday, June 9 at 11 am at the Panaewa Zoo Main Pavilion to discuss collaborative plans and initiatives moving forward throughout the eruption. The expected outcome of the meeting is collaboration among all parties including residents, rescue organizations and government entities so No Animals Are Left Behind.

During a meeting of the Hawaii County Council this week, two resolutions were passed providing some help for the response and recovery effort in Puna.

Resolution 622-18 transferred $2,520 from Kona councilman Dru Kanuha’s Contingency Relief account to the Department of Parks and Recreation to assist with expenses relating to providing meals to evacuees of the eruption.

Resolution 623-18 approved the mayor entering into a memorandum of agreement with the Hawai‘i County Workforce Development Board for rapid response activities. The agreement would specify the scope of service, cost and billing
protocols, and reporting requirements for activities associated with the volcanic eruption in Lower Puna. Video of the discussion below.

Hawaii Governor David Ige and the Hawaii Tourism Authority (HTA) today praised the decision of Norwegian Cruise Line to begin resuming port calls in Hilo and Kona on the island of Hawaii starting next week.

Governor Ige commented, “We are very grateful to Norwegian Cruise Line for reinstituting its port calls in Hilo and Kona. This is especially wonderful news for the small businesses in and around those communities that service the wishes of the ship’s guests as they venture out to experience the incredible beauty and fascinating attractions throughout the island of Hawaii.”

George D. Szigeti, HTA president and CEO, said, “Visitors who enjoy the Hawaii cruise experience will be thrilled knowing they can port in the island of Hawaii and see for themselves what makes the largest and most environmentally diverse of all the Hawaiian Islands so captivating. We thank Norwegian Cruise Line and appreciate the careful thought their executives put into making this decision, as this message to resume port calls in Hilo and Kona will be valued by potential travelers who are considering a trip to the Hawaiian Islands.”

Norwegian’s Pride of America cruise ship carries up to 2,500 passengers per week and is serviced by 900 crewmembers. Pride of America is home-ported in Honolulu and makes weekly cruise tours throughout the Hawaiian Islands, with port calls in Hilo and Kona on the island of Hawaii; Kahului, Maui; and Nawiliwili, Kauai.

Norwegian had temporarily halted port calls in Hilo and Kona starting the week of May 14 due to concerns about adverse conditions created by the ongoing eruptions of Kilauea volcano.