VIDEO: 7 am Eruption Update – Highway 130 To Reopen To All Traffic

HAWAII ISLAND - Highway 130 will re-open to all traffic beginning at 8 a.m. tomorrow, July 3. Highway 137 will also be open from Highway 130 north to Opihikao road. 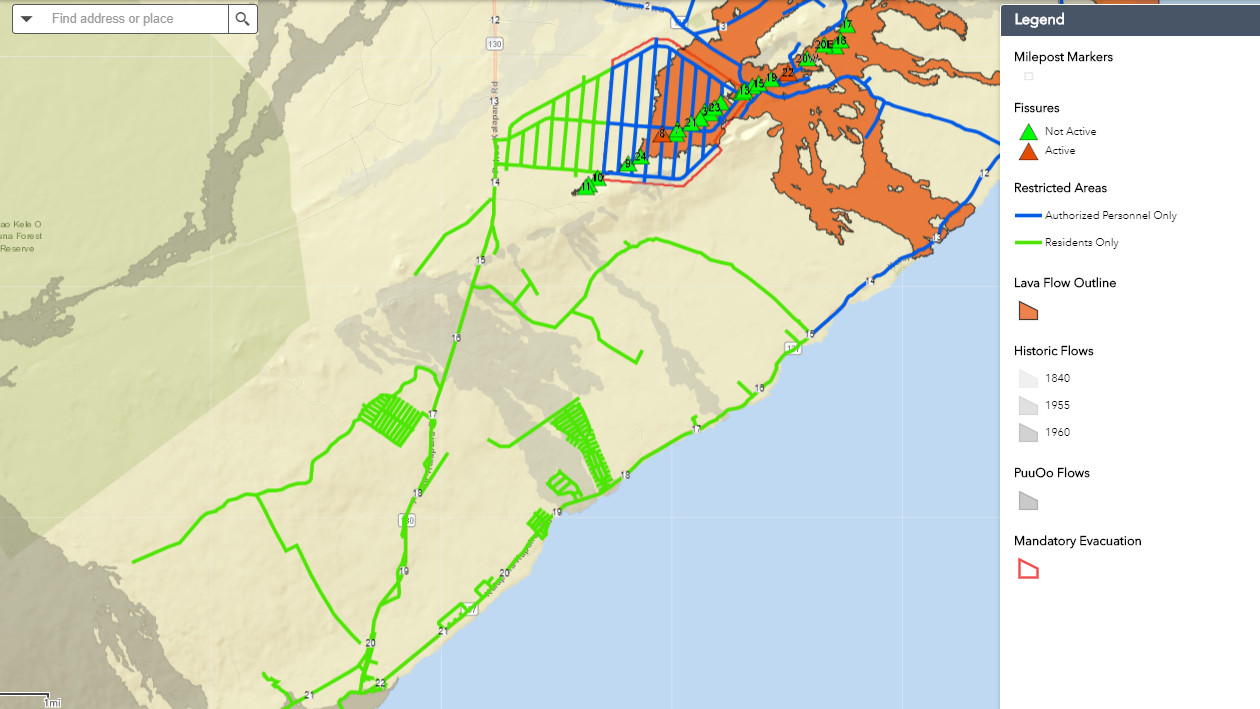 map courtesy Hawaii County shows the roads that will be reopened to all traffic tomorrow.

(BIVN) – The eruption in the lower East Rift Zone continues with no significant change during the past 24 hours, scientists say. However, Hawaii County officials announced a big policy change on Monday morning.

“There is no immediate danger,” civil defense said this morning, “but persons in the area are reminded to be on the alert for changing conditions and to monitor Civil Defense messages.”

The USGS Hawaiian Volcano Observatory posted this update this morning on the volcanic activity surrounding Fissure 8:

Fountains from Fissure 8 spatter cone continue to supply lava to the open channel with intermittent small, short-lived overflows. The spatter cone is now about 55 m (180 ft) tall at its highest point, and fountains rarely rise above that point. At the coast, the northern margin of the flow field is still oozing pasty lava at several points in the area of Kapoho Beach Lots. Lava was entering the sea over a broad area this morning primarily on the northern side of the entry area. As shown by the June 29 thermal map of the flow field, the lava channel has crusted over about 0.8 km (0.5 mi) inland of the ocean entry; lava oozing from the flow’s molten interior into the ocean along most of its broad front.

Fissure 22 is still spattering about 50-80 m above a conical spatter cone and feeding a short lava flow that is moving slowly to the northeast along the edge of earlier flows, scientists say.

Gas emissions from the fissure eruption and laze at the ocean entry continue to be very high. The National Weather Service reports trade winds will push vog to the south and west side of the island, civil defense says.

At the summit Of Kilauea, a collapse explosion event occurred at 1:24 a.m. on July 2. “Radar indicated an ash-poor plume rose ~1200 ft above the ground surface,” the USGS Hawaiian Volcano Observatory stated. “The energy released by the event was equivalent to a M5.3 earthquake. After the collapse/explosive event, seismicity dropped abruptly from a high of 20-25 earthquakes per hour (many in the magnitude 2-3 range) prior to the collapse explosion down to 5 or fewer earthquakes per hour afterwards. Inward slumping of the rim and walls of Halemaʻumaʻu continues in response to ongoing subsidence at the summit.”