HAWAII ISLAND - Lava appears to be reoccupying the channel leading to the ocean entry where multiple fingers of lava are active, civil defense. 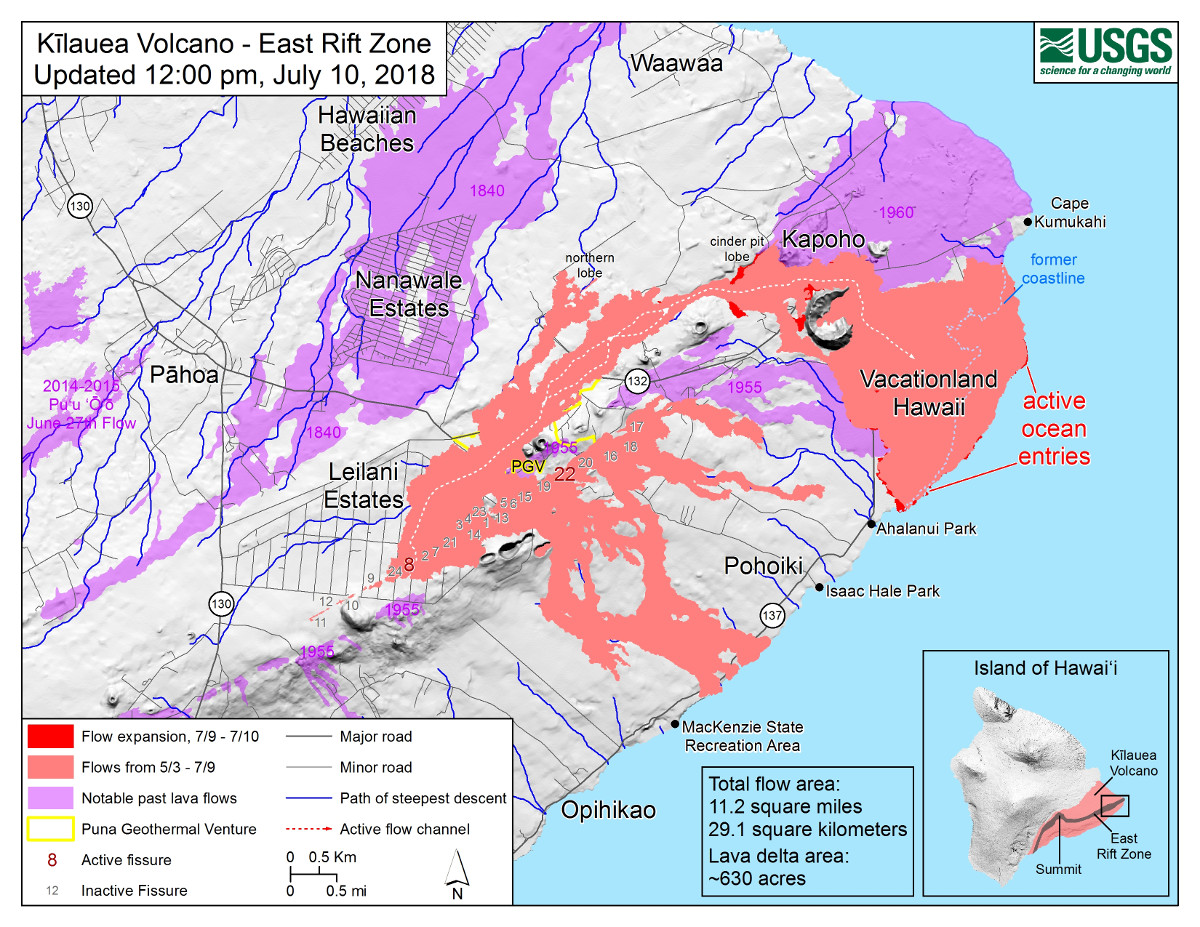 Hawaiian Volcano Observatory reports that Fissure 8 continues to erupt lava into the perched channel heading northeast from the vent. A lobe moving around the west side of Kapoho Cone remains active and small brushfires are reported along the edges. Lava appears to be reoccupying the channel leading to the ocean entry where multiple fingers of lava are active.

Beginning this morning, USGS personnel will conduct helicopter overflights of the Volcano Village, Volcano Golf and Country Club, and National Park areas to map ground deformation. Flights will begin around 7 AM and continue throughout the morning.

The following policies remain in effect: 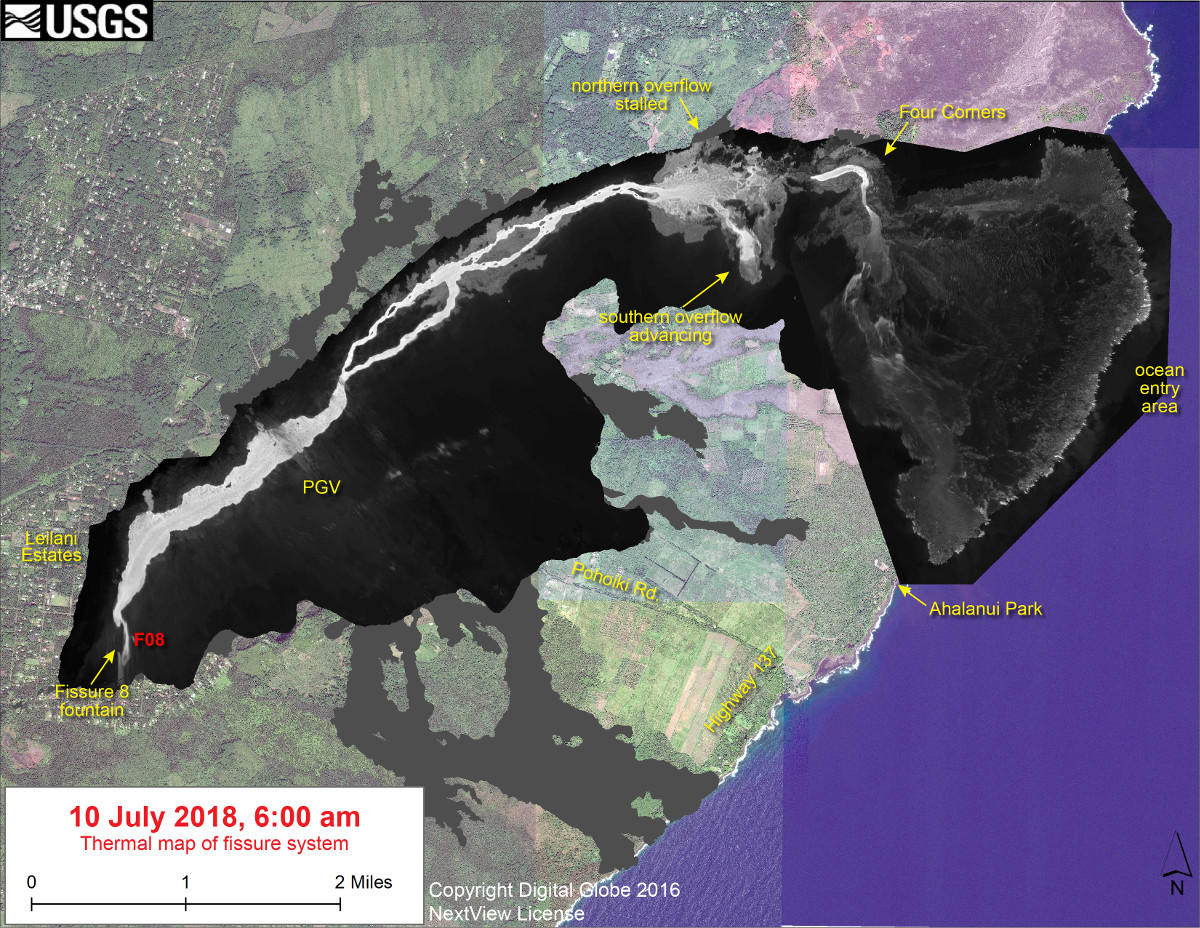 (USGS) This thermal map shows the fissure system and lava flows as of 6 am on Tuesday, July 10. The fountain at Fissure 8 remains active, with the lava flow entering the ocean at Kapoho. Lava is overflowing the channel west of Four Corners, with the overflow headed south along the west side of Kapoho Crater. The black and white area is the extent of the thermal map. Temperature in the thermal image is displayed as gray-scale values, with the brightest pixels indicating the hottest areas. The thermal map was constructed by stitching many overlapping oblique thermal images collected by a handheld thermal camera during a helicopter overflight of the flow field. The base is a copyrighted color satellite image (used with permission) provided by Digital Globe. 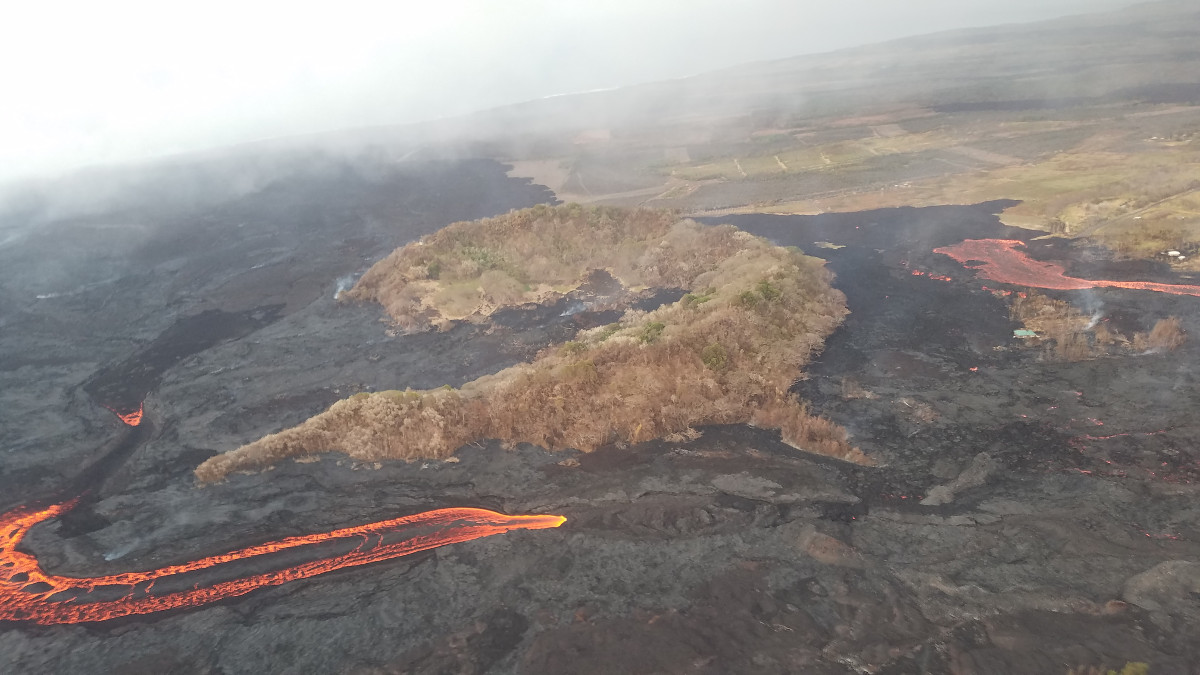 (USGS) Aerial view of Kapoho Crater looking toward the south-southeast. Part of the lava channel became blocked just upstream of Kapoho Crater yesterday, diverting flows to the west and then south around the crater (center right). Lava exiting a crusted section of the channel continued flowing in the channel pathway (lower center to left).

At 5:46 a.m. HST July 11, a collapse explosion event occurred at Kīlauea’s summit. The energy released by the event was equivalent to a M5.3 earthquake, the USGS Hawaiian Volcano Observatory reports.