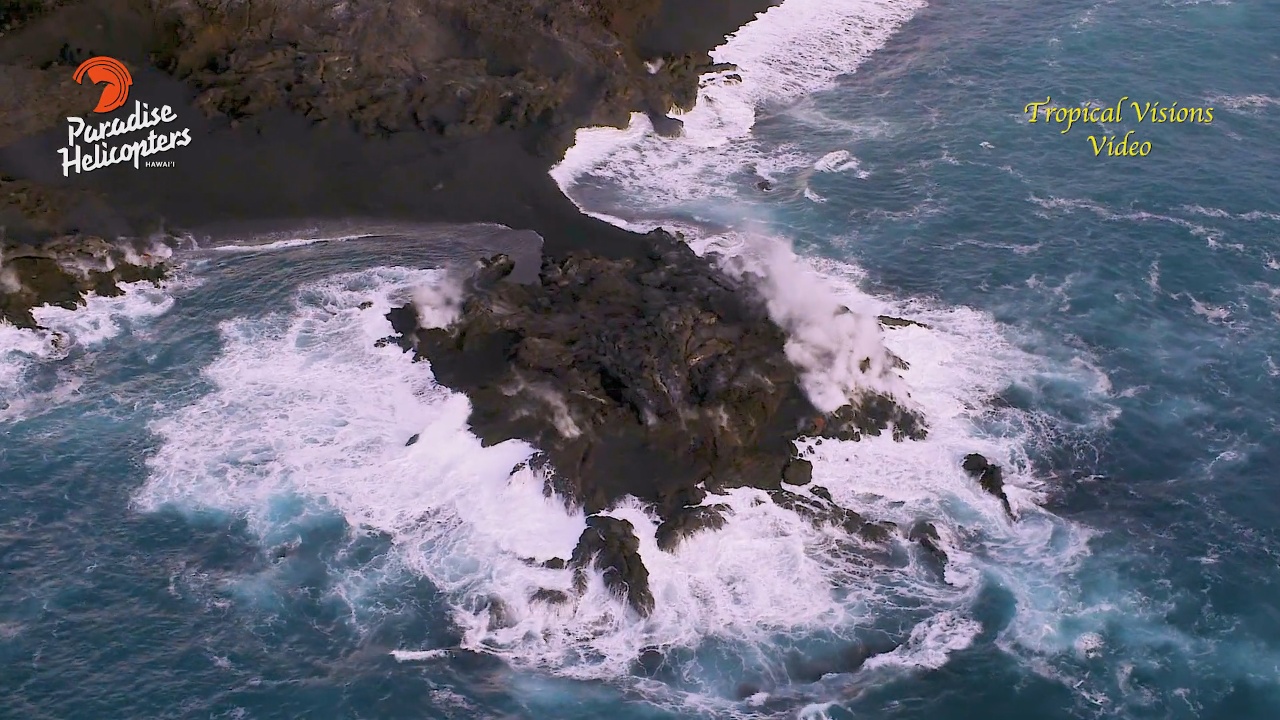 “The newly created island continues to grow off the eastern coast near what was once Kapoho Bay,” reported Mick Kalber, who recorded video from above on Sunday. “Upwellings of lava below the sea created the small island, which is rapidly becoming a peninsula, as a black sand beach is slowly connecting it to Hawaii Island.”

Fissure 8 continues to erupt lava into the perched channel leading northeastward from the vent. Lava levels in the upper channel increased briefly following this morning’s summit collapse-explosion event at 3:26 a.m. Another short-lived overflow of the channel at the vent spread east-southeast this morning, but did not advance beyond the existing flow field. The channelized ʻaʻā flow west of Kapoho Crater continues to be the main ocean entry at the southern edge of the flow front. The southern margin of the flow remained about 1 km (0.6 mi) from Isaac Hale Park this morning. Despite no visible surface connection to the fissure 8 channel, lava continues to ooze out at several points on the 6 km (3.7 mi) wide flow front into the ocean.

No other fissures were active this morning, scientists said. 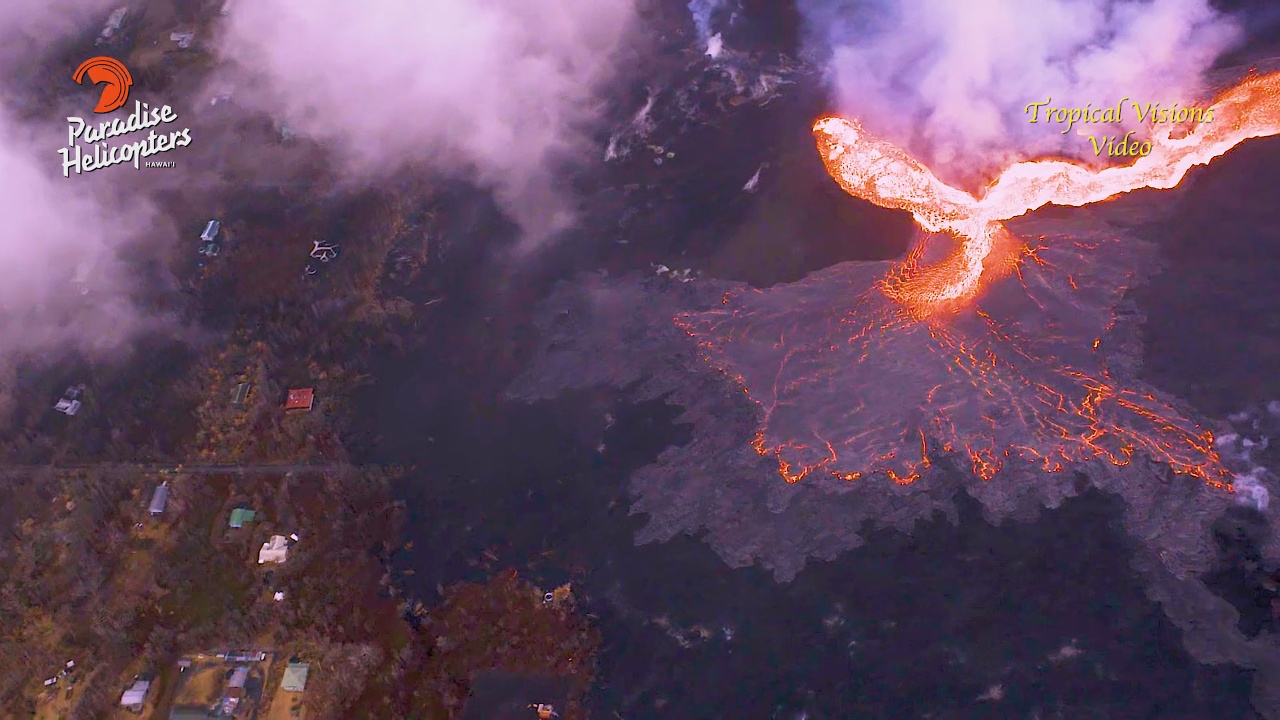 Videographer Mick Kalber said “we watched the surge arrive at Fissure 8 this morning at 6am. The extra lava pumped into the system caused an overflow which moved southeast from what is now the eruption’s main vent… but the flow never left the previously erupted flow field and did not endanger the homes nearby. “

“A slight chance for thunderstorms remains in the forecast through tonight for portions of the Puna District as heat and emissions interact with imcoming moisture,” the National Weather Service stated Sunday. “The upper low is forecast to pull further away tonight and Monday with an upper ridge building in across the area. This will cause to airmass to become more stable with a downward trend in shower activity.”

Seismic activity at the summit decreased immediately following the collapse/explosion that occurred at 3:26 a.m. early Sunday morning, but was already beginning to increase at noon. “We expect the number of earthquakes to increase through Monday morning or afternoon until the next collapse/explosion occurs,” the USGS Hawaiian Volcano Observatory said. “Inward slumping of the rim and walls of Halemaʻumaʻu continues in response to the ongoing subsidence at the summit.” 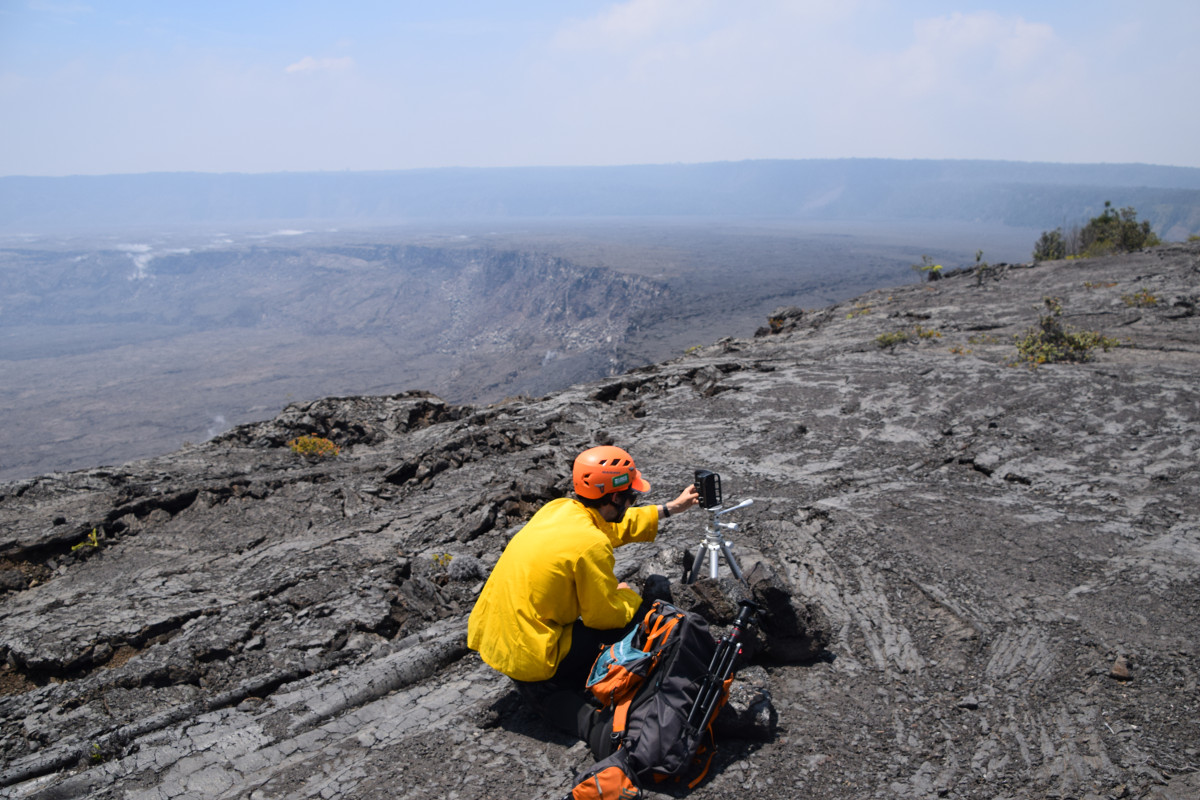 (USGS) A USGS geologist services a camera that captures time-lapse images of Kīlauea’s summit caldera and Halema‘uma‘u. To minimize risk from ongoing summit earthquakes, this work is done during the relatively quiet hours following summit collapse events when seismicity is at its lowest levels.