HAWAII ISLAND - Another summit collapse / explosion event occurred at 8:54 p.m. on Sunday evening. The event was measured at a magnitude of 5.5, USGS said. 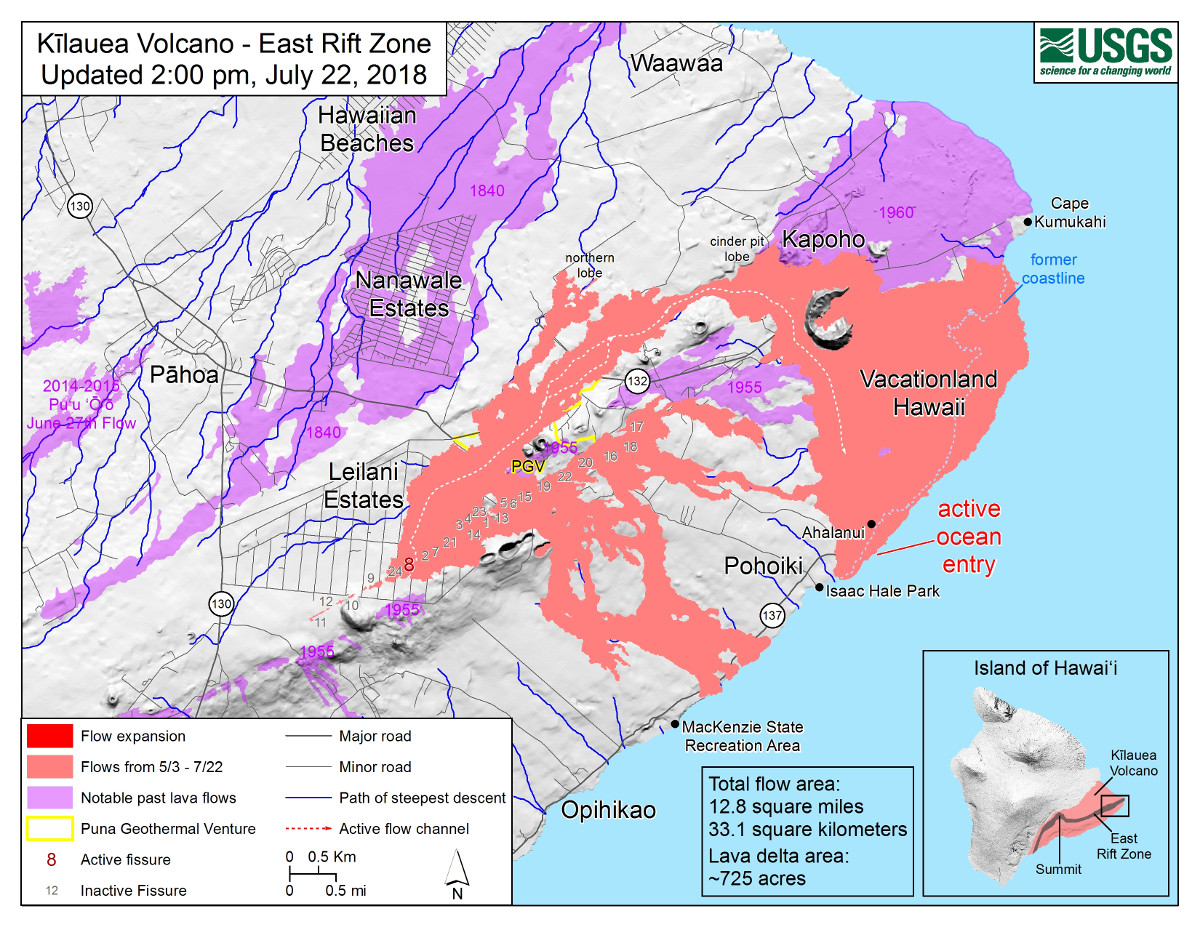 (USGS) As of 2:00 p.m. HST, July 22, 2018, the lava flow margins had not expanded since the previous map, so no red areas (indicating expansion) appear on this map. Given the dynamic nature of Kīlauea’s lower East Rift Zone eruption, with changing vent locations, fissures starting and stopping, and varying rates of lava effusion, map details shown here are accurate as of the date/time noted. Shaded purple areas indicate lava flows erupted in 1840, 1955, 1960, and 2014-2015.

(BIVN) – The Hawaiian Volcano Observatory reports that eruption activity continues from Fissure 8 into the lava channel flowing to the ocean entry at Ahalanui, a Monday morning civil defense message stated. “As of yesterday’s overflight report, the southern margin of the flow remains about 0.25 miles from Isaac Hale/Pohoiki Boat Ramp,” officials said.

“Pele continues to keep her distance from Pohoiki,” wrote videographer Mick Kalber after a Sunday overflight, “but the huge flow atop the previous one that took Ahalanui has made it’s way to the ocean, and moved only somewhat south toward the bay. She has, however, send a very large sand bar across the front of what’s left of “Bowls.” The flow can clearly be seen looming over Pohoiki to the northeast.” 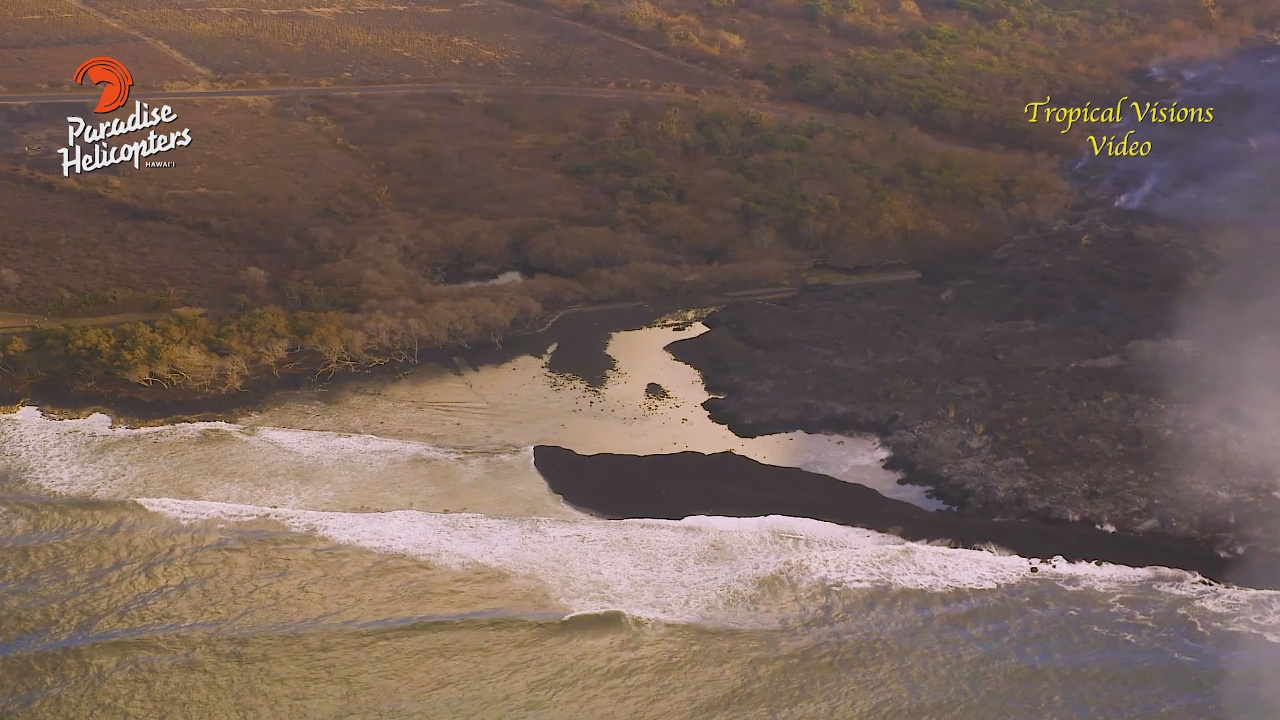 Earthquakes continue at the Kilauea summit, following another collapse / explosion event that occurred at 8:54 p.m. on Sunday evening. The USGS National Earthquake Information Center derived a magnitude of 5.5 for the event. State highways officials reported that the summit collapse event last night caused additional cracks on Highway 11 between the 28 and 32 Mile Markers. “Motorists are advised to stay on the pavement and to be on the alert for changing roadway conditions,” civil defense said.

UPDATE: In a Monday morning media release, Hawaii County officials said “State and County staff are closely monitoring the condition of Highway 11 between mile marker 28.5 at the entrance to Hawaiian Volcano National Park and mile marker 31.7 past Namakani Paio Campground. Because of cracks developing on the road, all motorists should drive cautiously in this area.”

“Do be aware that authorities are very concerned with the conditions on Highway 11, and are closely monitoring the situation,” the county said.

Residents are reminded to check utility connections of gas, water and electricity after earthquakes.

Also, news out of Washington D.C. today: “U.S. Senator Brian Schatz (D-Hawai‘i) announced that the U.S. Department of Labor (DOL) has approved up to $3.5 million in grant funding to the Hawai‘i Department of Labor and Industrial Relations,” a Schatz media release stated. “The Disaster Recovery National Dislocated Worker Grant will employ approximately 175 individuals to help with the clean-up efforts in areas on Hawai‘i Island that have been impacted by the Kilauea eruptions and earthquakes.”

“With this funding, many people who are already doing the hard work of cleaning up will be paid for their efforts,” said Senator Schatz, a member of the Senate Appropriations Committee. “This is one of several steps the federal government has taken to help people rebuild and recover from the volcano, and we’re grateful for the fast and flexible response.”

The White House approved a presidential disaster declaration requested by the State of Hawai‘i in May.