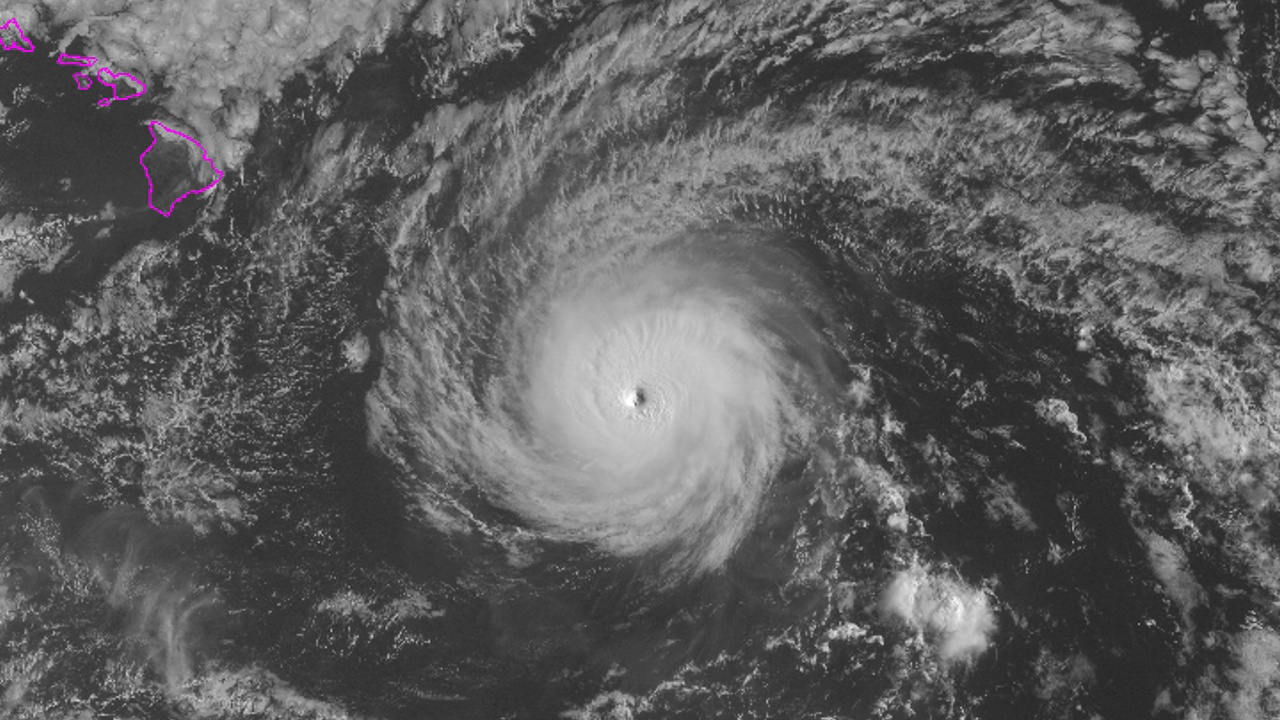 The center of Hector is forecasted to pass 100 to 150 miles south of the Big Island during the day on Wednesday. With tropical-storm-force winds that extend outward up to 115 miles, the “far northern fringes of the hurricane will brush the Big Island on Wednesday”, the National Weather Service Central Pacific Hurricane Center reported at 5 p.m. 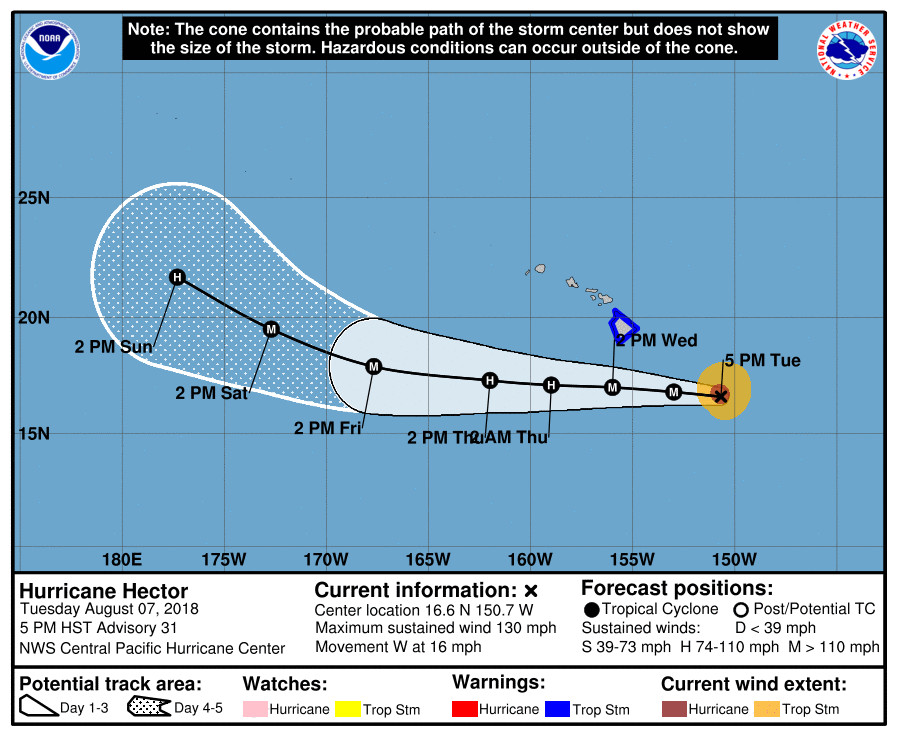 A Tropical Storm Warning means that tropical storm conditions are expected somewhere within the warning area. With maximum sustained winds near 130 mph, Hector is forecast to weaken a little during the next 48 hours. However, it is still expected to be a major hurricane as it passes south of Hawaii Island on Wednesday afternoon.

“Swells generated by Hector are expected to reach southeast and east facing shores of the Big Island and eastern Maui late today, likely becoming large and dangerous by late tonight and Wednesday,” forecasters said. “Tropical storm conditions are expected across portions of the Big Island on Wednesday as the core of Hector passes to the south. The strongest winds are expected downslope from mountains, across elevated terrain, over headlands, and through gaps.”

Whittington, Punaluu, and Milolii Beach Parks are closed, county officials say. All pavilion and camping permits for these three parks have been cancelled through Friday.

The Kahuku Unit of Hawai‘i Volcanoes National Park will also be closed Wednesday. “Park staff are preparing for the storm by stowing any loose items like garbage cans, sheets of plywood and securing doors, windows and screens,” the National Park Service stated. “Emergency workers on Tuesday also prepared chainsaws and other tools to respond to any damage caused by the storm, like fallen trees blocking roadways.”

UPDATE: The Hawaii DLNR Division of Forestry and Wildlife said it “will close the Waimanu valley campground and Ainapo cabin Tuesday through Wednesday, for public safety due to the approach of Hurricane Hector. There may be flooding risk at Waimanu due to possible effects of a king tide, storm surge and heavy rainfall. Ainapo may face possible impacts due to tropical strength winds and rainfall.”

“The two locations will reopen Thursday, following assessment by forestry staff,” DLNR reported. “All existing camping reservations will be cancelled and refunded for these two days. Persons holding camping permits for other dates may check status of these areas on the Na Ala Hele Trails and Access Program website at hawaiitrails.hawaii.gov/trails/”

UPDATE: The Disaster Recovery Center assisting residents with the Kilauea eruption recovery will be closed on Wednesday, August 8, due to the threat posed by the hurricane. Officials with the Federal Emergency Management Agency said that they would re-evaluate conditions on Thursday morning to determine if it was safe to re-open.

The Coast Guard Captain of the Port set port condition YANKEE for Hawaii County Ports (Hilo and Kawaihae) as of 11 a.m. Tuesday in advance of Hurricane Hector. “At Port Heavy Weather Condition YANKEE gale force winds are predicted to arrive within 24 hours,” the USCG says. “Ports are closed to inbound traffic, and vessel traffic control measures are in effect on vessel movements within the port. All pleasure craft shall seek sheltered waters. The Captain of the Port is directing action by the maritime and port community. All ocean-going vessels and barges 200 gross tons and above, without an approved application to remain in port, shall make preparations to depart port before the setting of port condition ZULU.”

The last reconnaissance pass through Hector showed maximum flight level winds of 124 kt in the northern eyewall, as well as believable SFMR winds of 111 kt. This is the justification for maintaining Hector at 115 kt as of this advisory. Over the last few hours, the eye temperatures on IR imagery have been cooling, which may signal the beginning of the anticipated weakening trend.

The longer term motion remains 280/14, though there are perhaps some signs of a more due westward motion over the past few hours. The track philosophy has not changed, though Hector’s persistent slow trek toward higher latitudes now will bring the tropical storm force wind field associated with the hurricane close enough to the Big Island to necessitate issuing a tropical storm warning. The forecast track has been adjusted slightly to the north during the next 48 hours, but still lies very close to the guidance consensus. After 48 hours, Hector is expected to begin gradually gaining latitude as it passes by the anticyclone and comes under increasing influence of an upper trough to the west of 170W.

Hector is in a low shear environment, but only marginally warm sea surface temperatures. This is expected to yield a gradual weakening trend for the next couple of days. Afterward, the low-shear environment continues, but water temperatures gradually warm, which may allow Hector to restrengthen a bit. Toward the end of the forecast period, wind shear may start to affect the hurricane, and the official forecast initiates a new weakening trend. The overall confidence in the intensity forecast is somewhat low due to these competing factors. As before, our intensity forecast tends to more closely follow the ICON guidance, which shows Hector remaining stronger than SHIPS guidance indicates.