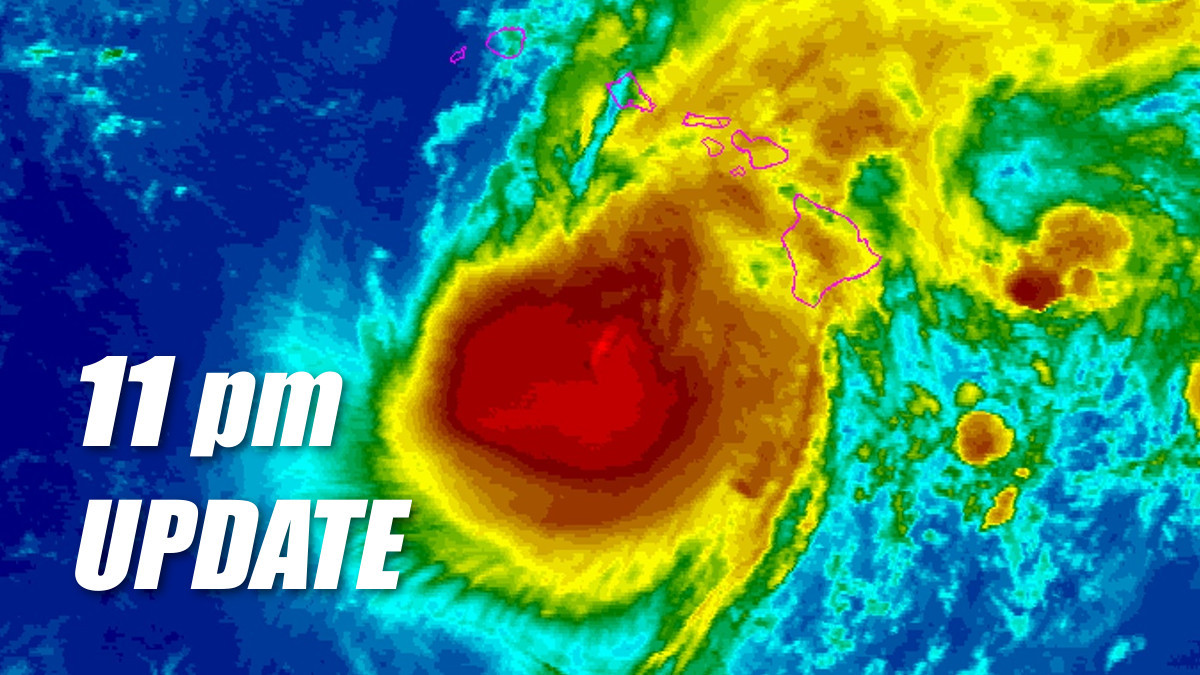 (BIVN) – Powerful Category 3 Hurricane Lane is moving slowly toward the north near 6 mph, as extreme flooding continues on Hawai‘i Island.

The Big Island is under a Tropical Storm Warning, and East Hawai‘i is under a Flash Flood Warning. “Catastrophic flooding continues this evening over the Big Island with peak totals near or around the 25″ mark just south of Hilo (Waiakea Exp. Station),” the National Weather Service reported. Forecasters also said:

At 1045 PM HST…radar and rain gauges continue to show areas of heavy rain along the windward sections of the Big Island, with the heaviest rains focusing upslope of Hilo in the Wailuku River valley. Flash flooding is occurring across the warned area, with Hawaii County Civil Defense reporting that evacuations and water rescues are in progress, including in the Reeds Island area of Hilo along the Wailuku River. Water levels on the Wailuku River and Honolii Stream remain very high, with the level on the Wailuku River having risen about 7 feet between 6 PM and 10 PM HST. Saddle Road is currently closed near the 10.5 mile marker above Hilo due to a landslide. Bands of heavy rain will continue moving into the Big Island during the night. THIS IS A VERY DANGEROUS SITUATION. AVOID UNNECESSARY TRAVEL.

Hurricane Lane is expected to turn toward the west on Saturday, with an increase in forward speed. On the latest forecast track, forecasters say the center of Lane will move over, or dangerously close to portions of the main Hawaiian islands late Friday and Friday night. 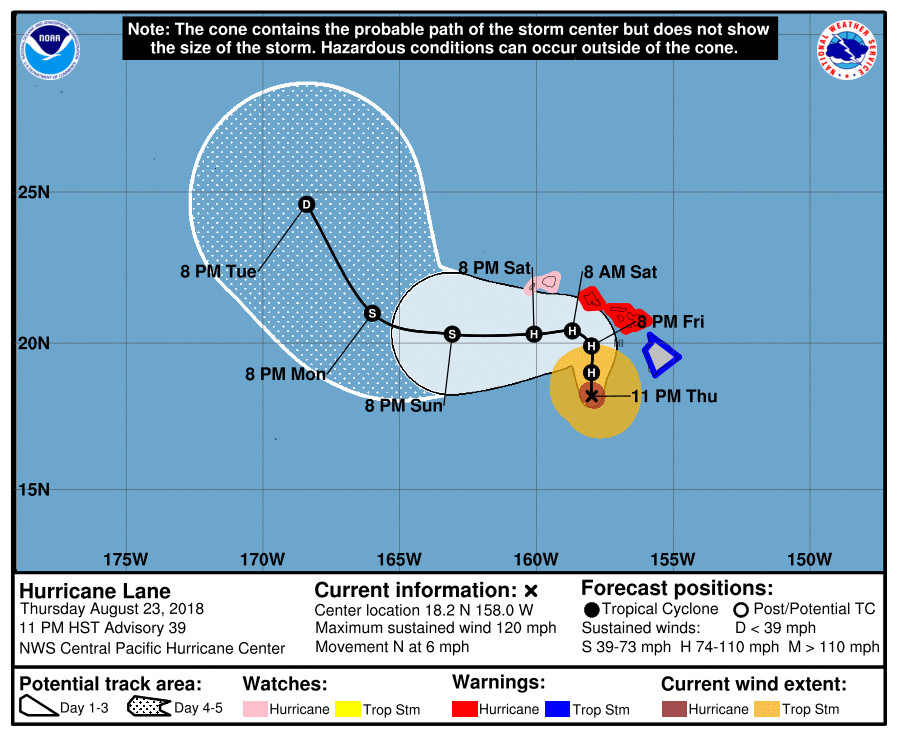 Tropical storm conditions are already occurring on the Big Island, Maui County and Oahu. These conditions will likely persist through early Friday morning. Gusts of 68 mph were recorded at Kohala Ranch.

“Lane is expected to produce total rain accumulations of 10 to 20 inches, with localized amounts of 30 to 40 inches possible over portions of the Hawaiian Islands,” the Central Pacific Hurricane Center said. “Over two feet of rain has already fallen at a few locations on the windward side of the Big Island.”

The Hawai‘i Department of Transportation provided this update:

Hurricane Lane is beginning to show some signs of slow weakening due to wind shear of over 20 knots from the southwest according to the SHIPS and UW-CIMSS analyses. There is no eye evident in satellite imagery, which is likely a result of these hostile conditions. Radar reflectivity data from the WSR-88D radars at Molokai and Kohala show the center is becoming elongated in a north to south direction. The latest satellite intensity estimates from HFO, JTWC, TAFB and SAB were a unanimous T5.5/102 knots, while the UW-CIMSS ADT was T5.7/107 knots. The current intensity is held at 105 kt based on these estimates.

The initial motion estimate is 350/5 knots, which shows a northward turn has occurred this evening. Lane continues to be steered toward the north along the western side of a mid-level ridge, which is located to the east of Hawaii. The consensus guidance continues to show a northward motion, or even a motion toward just east of due north, as the ridge builds south and possibly southwest of Lane. The latest track has shifted to the right of the previous forecast through the next 48 hours. This more closely follows the latest consensus track guidance. Note that on this track, Hurricane Lane continues to approach the Main Hawaiian Islands, so there is no reason to believe that anyone is safe in the warning area. Assuming Lane begins to weaken, and decouple before, or after, it hits the islands, Lane is forecast to come increasingly under the influence of the low level easterlies and begin tracking westward. Again, the exact time when this will occur remains highly uncertain, and only a small delay in this decoupling could bring Lane farther north. This will produce considerably worse conditions over the islands. Even if Lane remains along the forecast track, significant impacts are expected in the Hawaiian Islands.

Our intensity forecast shows some weakening, but continues to trend on the high side of the intensity guidance through 72 hours owing to how organized Lane’s core has been in recent days. Note that the CIRA analysis of Ocean Heat Content along the latest forecast track continues to show very high values during the next 24 to 36 hours, so this will likely help maintain the intensity longer than might be expected with such high shear. By early next week, it is possible that Lane will not survive the shear, and may become a remnant low by day 5.

2. Lane will pass dangerously close to the main Hawaiian Islands as a hurricane on Friday, and is expected to bring damaging winds. Terrain effects can cause strong localized acceleration of the wind through gaps and where winds blow downslope. These acceleration areas will shift with time as Lane passes near or over the islands. Winds will also be stronger at the upper floors of high rise buildings.

4. Large and damaging surf can be expected along exposed shorelines, especially along south and west facing coasts, with localized storm surge exacerbating the impacts of a prolonged period of damaging surf. This could lead to severe beach erosion.