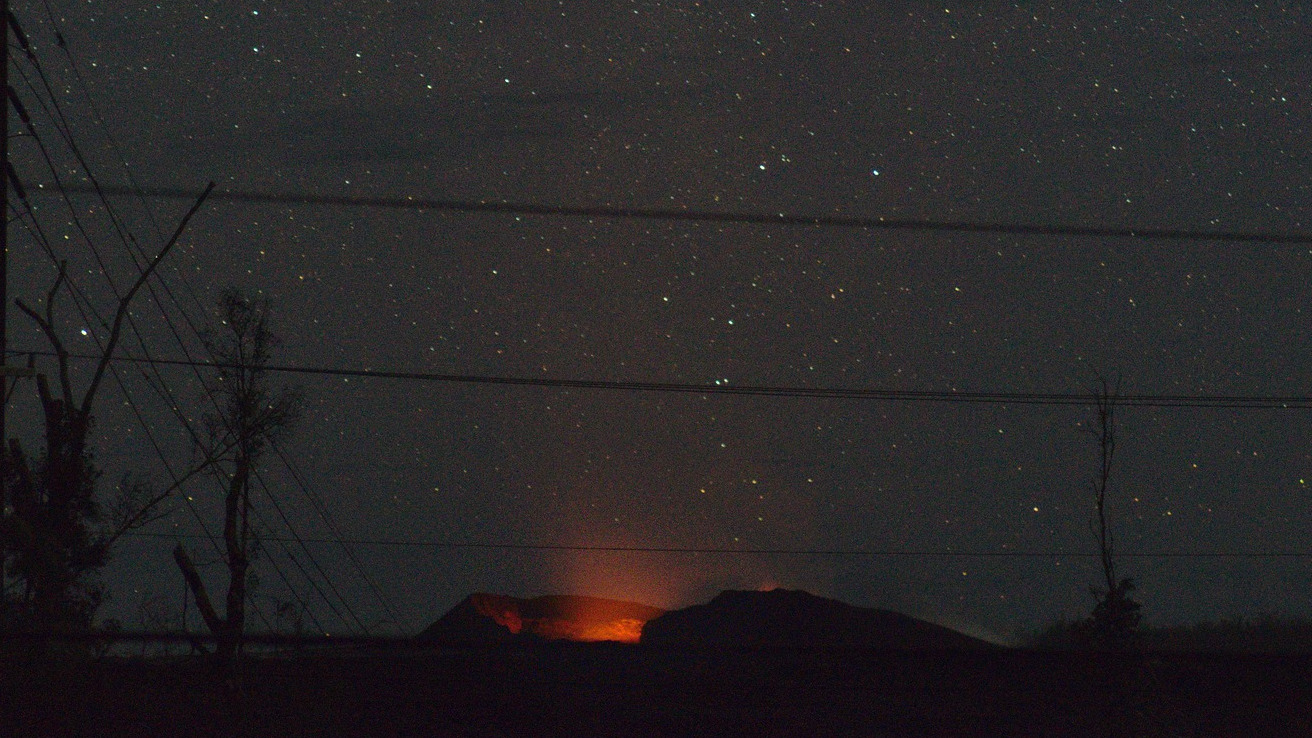 This long-exposure image by Harry Durgin shows a faint glow at Fissure 8, although at the time the photo was taken, the vent appeared dark to the naked eye. 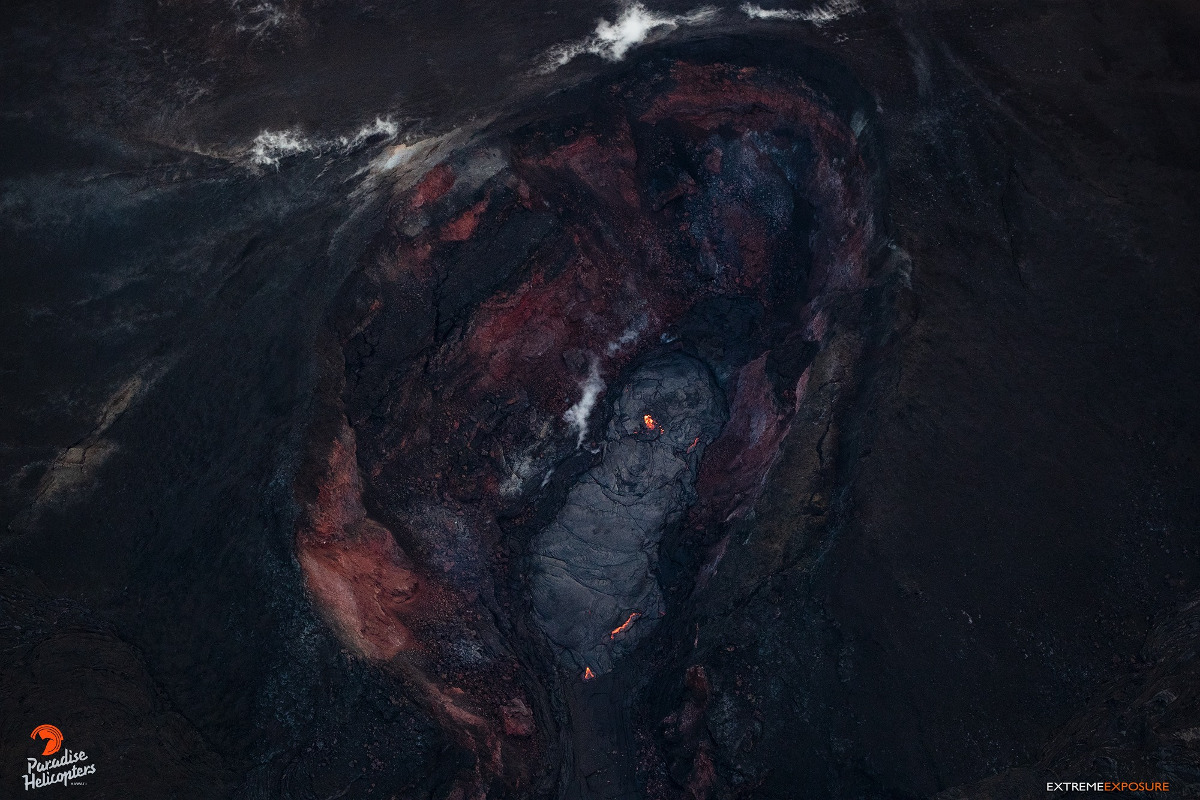 Lava in Fissure 8, seen on Sept. 1 from a Paradise Helicopter overflight. Photo by Bruce Omori of Extreme Exposure.

(BIVN) – After a period of quiet, lava has returned to the Fissure 8 vent on the lower East Rift Zone of Kilauea.

The spattering observed on Saturday in the vent is far from the voluminous eruptive activity that occurred during June and July. However, it is a sign that Fissure 8 – located in the middle of Leilani Estates – is not dead.

The USGS Hawaiian Volcano Observatory issued this report on Sunday:

On the volcano’s lower East Rift Zone (LERZ), incandescence was observed in the fissure 8 cone yesterday afternoon (09/01) with reports of activity extending into early evening. In addition to a persistent spot of spattering, lava slowly covered the 65-by-15 m (210-by-45 ft) crater floor by evening. Webcam views showed weak incandescence occasionally reflected on the eastern spillway wall from the crater overnight suggesting that the lava in the crater remained active. This morning, ground crews have no view of the crater inside the fissure 8 cone, but report the fissure 8 cone is quiet when viewed from a safe distance with no visible fume.

Seismicity remains low and ground deformation is negligible at the summit of Kīlauea Volcano, scientists say. Sulfur dioxide emission rates at the summit, Puʻu ʻŌʻō, and LERZ are also drastically reduced. USGS says the combined rate “is lower than at any time since late 2007. Friday (08/31), LERZ emission rates were still too low to measure.” 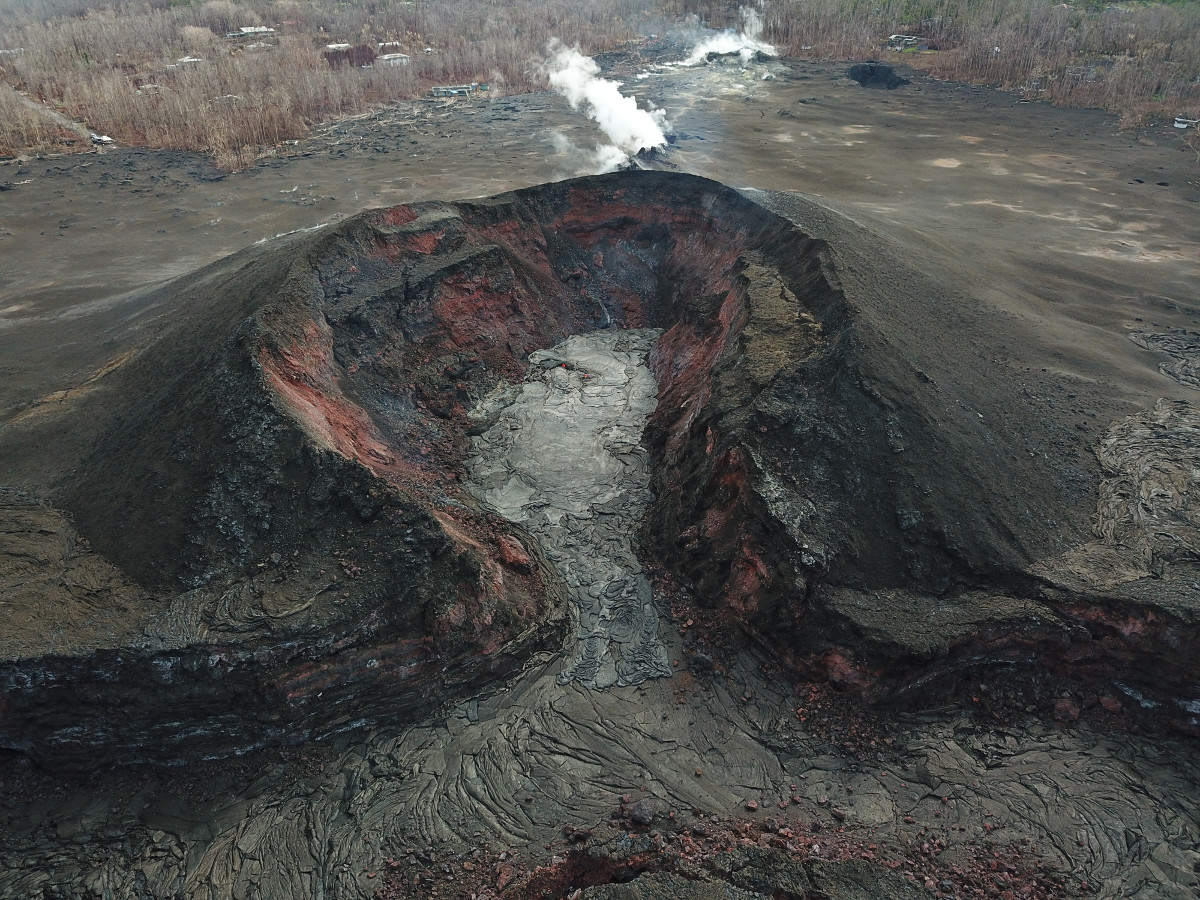 An Unmanned Aircraft Systems (UAS) oblique image of fissure 8 taken Sept. 2 “shows that the new lava is mostly confined to the crater floor within the cone, although a small amount extended a short distance into the spillway,” USGS said. By early evening, HVO geologists noted that the lava activity was at a low level, with only minimal (if any) incandescence emanating from the cone. Gas emissions from the vent were nearly nonexistent.

The observation prompted a new message from Hawaii County Civil Defense, which reiterated that it “is common for eruptions to go through periods of diminished output, or to pause completely, only to reactivate days, weeks, or even months later.”

Civil Defense said the following access policies and restrictions are in effect:

“We will continue to monitor this eruption activity and inform you of any changes that could affect your safety,” officials said.

Previously, the last visible incandescence in the Fissure 8 cone was observed on August 25. However, citizen observers were keeping a watchful eye.

First, Harry Durgin, who maintains lava webcams trained on Fissure 8, captured a long-exposure image that revealed a faint glow at the vent. At the time the photo was taken, the vent appeared dark to the naked eye.

On Saturday, photographer Bruce Omori of Extreme Exposure captured the definitive evidence that low level eruptive activity persists at Fissure 8. “A bit of spattering occurred, although not very consistent nor vigorous, there were a few moments when lava burst upward of 20 feet,” said Omori. “Cracks along its periphery and surface led me to believe that convective circulation was occurring, but upon closer inspection, I think that it may just be pressurized expansion fracturing its cooled surface.”