UPDATED with video by David Corrigan

PUNA, Hawaii - MacKenzie State Recreation Area in lower Puna will be reopened on Saturday, although walking over the recent lava flows is still prohibited. 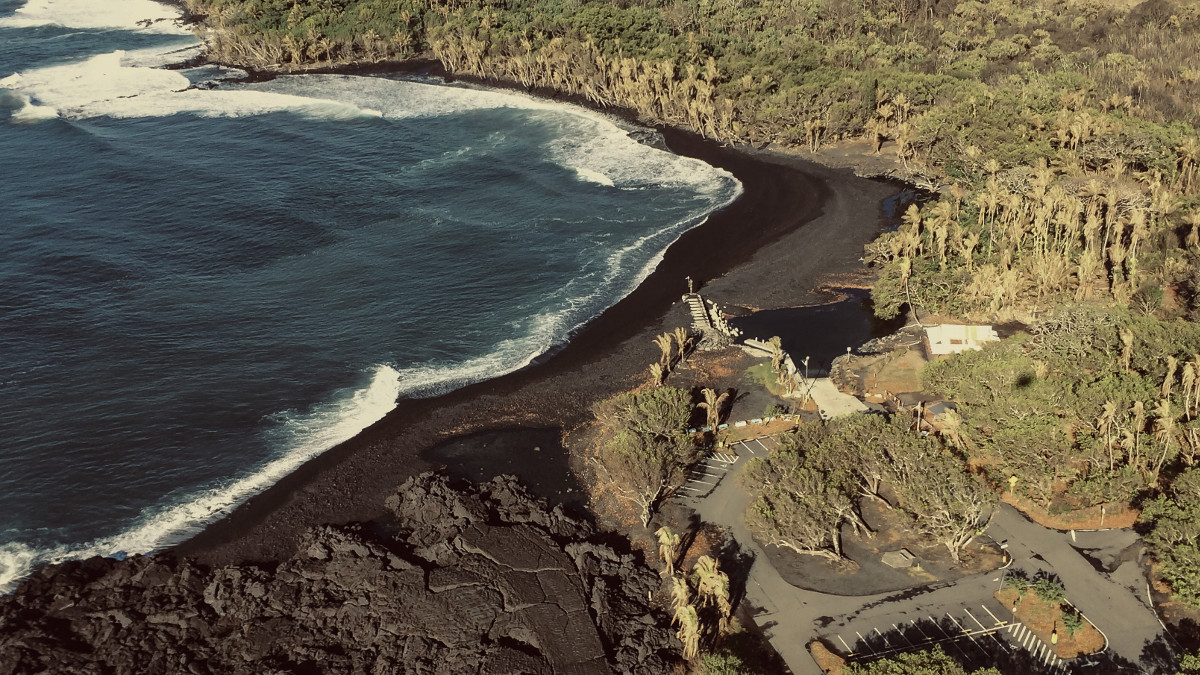 (BIVN) – UPDATED at 4:30 p.m. – Hawai‘i County Civil Defense held a press conference today at 3 p.m. in Hilo to announce “the opening of the Mandatory Evacuation Zone of Leilani Estates this weekend,” following the lull in eruptive activity at Kīlauea Volcano.

Also, MacKenzie State Recreation Area in lower Puna will reopen on Saturday, state officials say, along with the Malama Kī Forest Reserve. The route that traverses over recent lava flows to Pohoiki, however, will remain off limits.

Mayor Harry Kim is lifting the mandatory evacuation order for Leilani Estates, effective Saturday, September 8 at 9:00 a.m. The area east of Pomaika’i Street had been closed since May 31, 2018 due to lava flows and volcanic gas from the Kilauea Lower East Rift Zone eruption.

Access to Leilani Estates will remain restricted to residents and authorized personnel only. The entire flow field, including a 50-yard perimeter, remains off limits. Residents with property within the 50-yard flow field perimeter must notify Civil Defense for a waiver.

Residents returning to portions of the impacted area in Leilani Estates may experience delays of first responder services due to limited access points and road conditions.

“Leilani Estates was evacuated to preserve health and safety, and to protect residents until the hazards were reduced from the eruption” said Mayor Harry Kim. “We are happy residents can return to their homes but caution everyone to stay vigilant and be prepared as conditions can change rapidly.”

Residents moving back into their homes should take the following safety precautions, officials say.

The Leilani Estates Community Center will be open on Saturday at 9:00 a.m., county officials say. “Personnel from Civil Defense and the Leilani Community Association will provide information to residents returning to their homes,” the media release stated. “For further information, please contact Kelly Wooten at Civil Defense at kelly.wooten@hawaiicounty.gov or call 935-0031.”

On Kīlauea’s lower East Rift Zone, the USGS Hawaiian Volcano Observatory reported on Friday that “no incandescence was visible at fissure 8 from helicopter overflight or UAS (drone) views this morning. Small lava flows have been observed within the fissure 8 cone, however none extend outside the walls of the cone. There is no change in overall activity from observations over the past several days.”

“Tiltmeters in Kīlauea’s middle East Rift Zone are recording small amounts of inflationary tilt, which may be a sign of refilling of the rift zone,” USGS said. “The current rates are much smaller than those measured during the period of major eruptive activity and are not changing rapidly.”

Here is the full media release issued by the Hawai‘i Department of Land and Natural Resources:

The DLNR Division of State Parks, in consultation with other DLNR divisions and the Hawai‘i County Civil Defense Agency is reopening MacKenzie State Recreation Area (SRA) in Lower Puna on Saturday, Sept. 8, 2018. The park had been closed since shortly after the beginning of the East Rift Zone eruption in early May.

While the park is reopening, there are continuing restrictions for people traveling across recent lava flows to reach the shoreline at Pohoiki. The route traverses through a portion of the Malama Kī Forest Reserve, which was also closed for several months, and over state unencumbered land. The forest reserve, also closed for several months due to eruptive activity, is reopening simultaneously with MacKenzie SRA. A safety buffer of 50 meters from recent lava flows in the forest reserve will be maintained until further notice. Anyone venturing into the restricted zone is still subject to citation or arrest for loitering in a disaster zone. More than 90 people were cited over the course of several months when the entire area had been declared off-limits.

Gordon Heit, the Hawai‘i island Land Agent with the DLNR Land Division warned, “We expect a significant number of people will be wanting to explore the newly created beaches on the unencumbered lands north of MacKenzie SRA. People need to use extreme caution when approaching the water. In some locations, steep, unstable cliffs were formed by recent lava flows and they drop into very deep water where ocean currents are very unpredictable.”

Hikers, sightseers and ocean recreationists should carry ample water, have sun protection and wear sturdy footwear to cross over the rough and uneven ground from MacKenzie to Pohoiki.

The state boat ramp at Pohoiki was never closed during the eruption, but is currently cut off from the ocean by a new black sand beach. Officials from the DLNR Division of Boating and Ocean Recreation (DOBOR) plan to assess conditions at Pohoiki again next week to determine whether in the future the boat ramp can be used again or begin making plans to build a new ramp at another location along the lower Puna coast. The construction of a new ramp is dependent on funding and road access to the shoreline.

DLNR State Parks Administrator Curt Cottrell said, “We are reopening MacKenzie SRA with full knowledge and it is anticipated that many people will use it as the gateway to hike to Pohoiki. We strongly encourage anyone making this trip to be completely self-sufficient and well prepared. The landscape has changed in dramatic and still unknown ways and folks need to be very cautious and pay attention to the terrain.”

Since last week, Hawaii Electric Light personnel have been conducting damage assessments, removing damaged poles, lines and equipment, and securing the remaining equipment to ensure public safety and road access. The utility also is working with the County of Hawaii Department of Public Works to inspect the service entry equipment and shut off the main breaker at homes in the mandatory evacuation area. This process assures that the electrical equipment and appliances are not accidentally turned on when electricity is restored.

Work will be done in phases using a systematic approach with an emphasis on safety. The areas with minimal damage will be restored first. Depending on the extent of the damage, some homes could have power within days, while others will take longer.

“We know many residents are looking forward to returning home, and we’re committed to restoring electric service to the community in areas where we can safely do so,” said Jay Ignacio, Hawaii Electric Light president. “We ask the community to please not approach areas where electrical work is being performed. This is for your safety and it allows ours crews to complete their work as quickly and as safely as possible.”

Customers in Leilani Estates are asked to call Hawaii Electric Light’s Customer Service line at 969-6999 to restart electric service or for questions about their account.