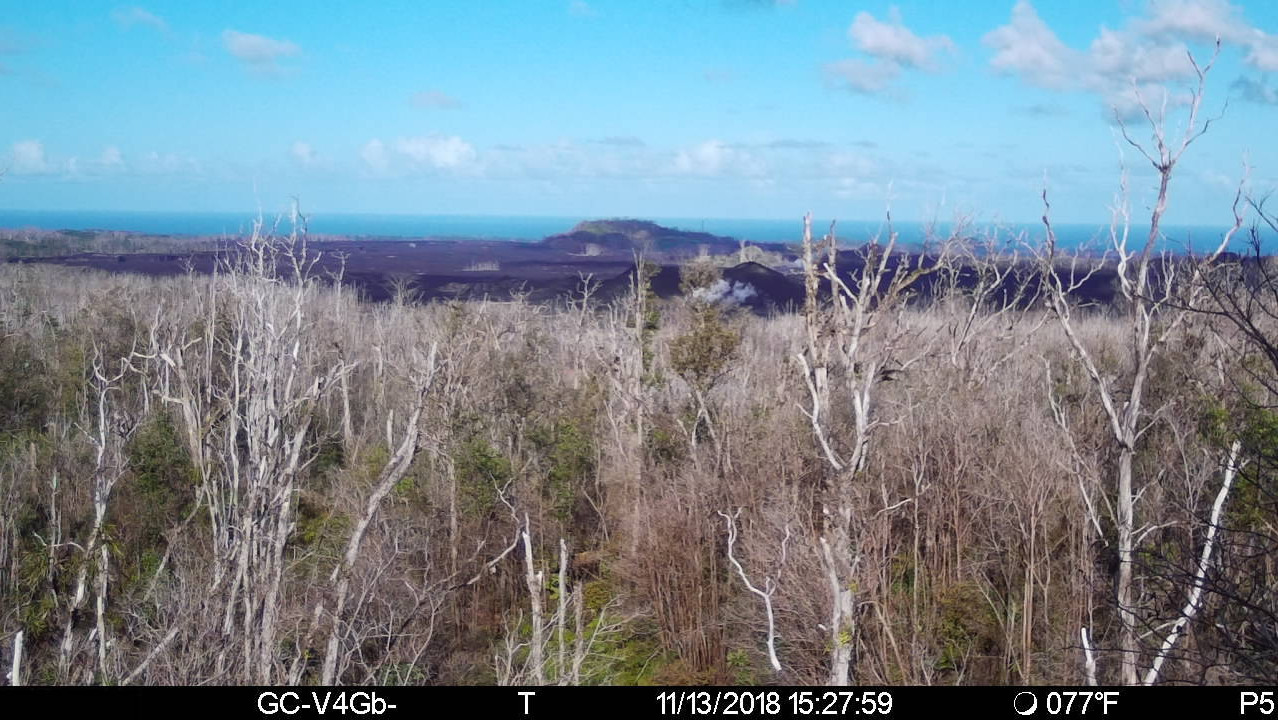 HAWAIʻI ISLAND - Rates of seismicity, deformation, and gas release have not changed significantly over the past week, scientists said in a weekly update.

On Tuesday, the USGS Hawaiian Volcano Observatory repeated: “Kīlauea Volcano is not erupting. Rates of seismicity, deformation, and gas release have not changed significantly over the past week. Deformation signals are consistent with refilling of the middle East Rift Zone.”

In the East Rift Zone, of ERZ, “tiltmeters near Puʻu ʻŌʻō and farther east reveal no change over the last weekm” scientists reported. “At the summit, tiltmeters have also shown little change this week, with the exception of a small DI (deflation-inflation) event.”

Earthquakes continue to occur primarily at Kīlauea’s summit area and south flank, with continued small aftershocks of the magnitude-6.9 quake on May 4, 2018 USGS says. Seismicity remains low in the lower East Rift Zone.

Sulfur dioxide gas emissions also remain low. At the summit. USGS measurements of SO2 averaged 50 tonnes/day as reported on October 24, and 75 tonnes/day at Puʻu ʻŌʻō on October 23. There was no sulfur dioxide detected by our instruments in the lower ERZ, scientists said.

The road to recovery continues in Puna. Next week Monday, councilwoman Eileen O’Hara – in one of her final proposals before her council term is up – brings forward a resolution addressing a pressing issue in Leilani Estates.

Resolution 748-18 would authorizes the Mayor to enter into an agreement with the Leilani Community Association concerning the barricading of Leilani Avenue, “which may remain in effect during the period of the road’s temporary closure to the general public to prevent loitering and illegal trespassing onto private property”.

The language of the resolution states:

WHEREAS, Chapter 24, Article 7, Division 3, Section 24- 153. 3, Subsection( b) of the Hawaiʻi County Code 1983 ( 2016 Edition, as amended), provides that the Council of the County of Hawaiʻi by resolution, in consultation with the Chief of Police and the Director of the Department of Public Works, may authorize the temporary closure of a County-owned “roadway stub-out, dead-end and/or other road terminus to be barricaded”, if the flow of traffic or public access is not affected, adjacent landowners are provided with written notification by the requesting agency, and when the closure is necessary to prevent loitering, littering, and other illegal activities; and

WHEREAS, Leilani Avenue is a County road that has been blocked by the 2018 lava flow, and which as a result has become a “dead end” road, providing access only to private property located within the Leilani Estates Subdivision, and will remain a “dead end” road until such time as the road may be rebuilt; and

WHEREAS, Leilani Estates Subdivision roads and all property within the subdivision are entirely privately owned, other than Leilani Avenue, such that Leilani Avenue currently accesses only private property, and currently provides no thoroughfare access to any public right of-way; and

WHEREAS, the Leilani Community Association is a non-profit organization that operates under Hawai`i Revised Statutes Chapter 421J, with authority to maintain the roads of the Leilani Estates Subdivision as well as provide for the general public social welfare and safety of the subdivision; and

WHEREAS, the Leilani Community Association has made a good faith determination, with which the Council concurs, that the temporary closure of Leilani Avenue to general public access is necessary to prevent loitering and illegal trespassing onto private property; and

WHEREAS, the temporary closure of Leilani Avenue will not otherwise affect the flow of traffic or public access to lava viewing and related tourism activities in the lower Puna area, and will not affect the current access to or use of the road by residents of the Leilani Estates Subdivision and their guests; now, therefore,

BE IT RESOLVED BY THE COUNCIL OF THE COUNTY OF HAWAII that Leilani Avenue is hereby temporarily closed to general public access pursuant to Chapter 24, Article 7, Division 3, Section 24- 153. 3, Subsection( b) of the Hawaiʻi County Code 1983 (2016 Edition, as amended), and the Mayor, in consultation with the Chief of Police, the Director of Civil Defense, and the Director of Public Works, is hereby authorized to enter into an agreement with the Leilani Community Association concerning the barricading of Leilani Avenue, which may remain in effect during the period of the road’s temporary closure to the general public.

BE IT FURTHER RESOLVED that the removal of the temporary closure of Leilani Avenue shall be authorized by Council resolution at such time in the future when the road may be rebuilt to provide thoroughfare access to a public right-of-way.

BE IT FINALLY RESOLVED that the County Clerk shall transmit a copy of this resolution to the office of the Mayor, the Chief of Police, the Civil Defense Administrator, and the Director of Public Works.

The resolution will go before the Hawaiʻi County Council Committee on Public Works and Parks & Recreation when it meets in Kona on November 19 at 1:30 p.m.