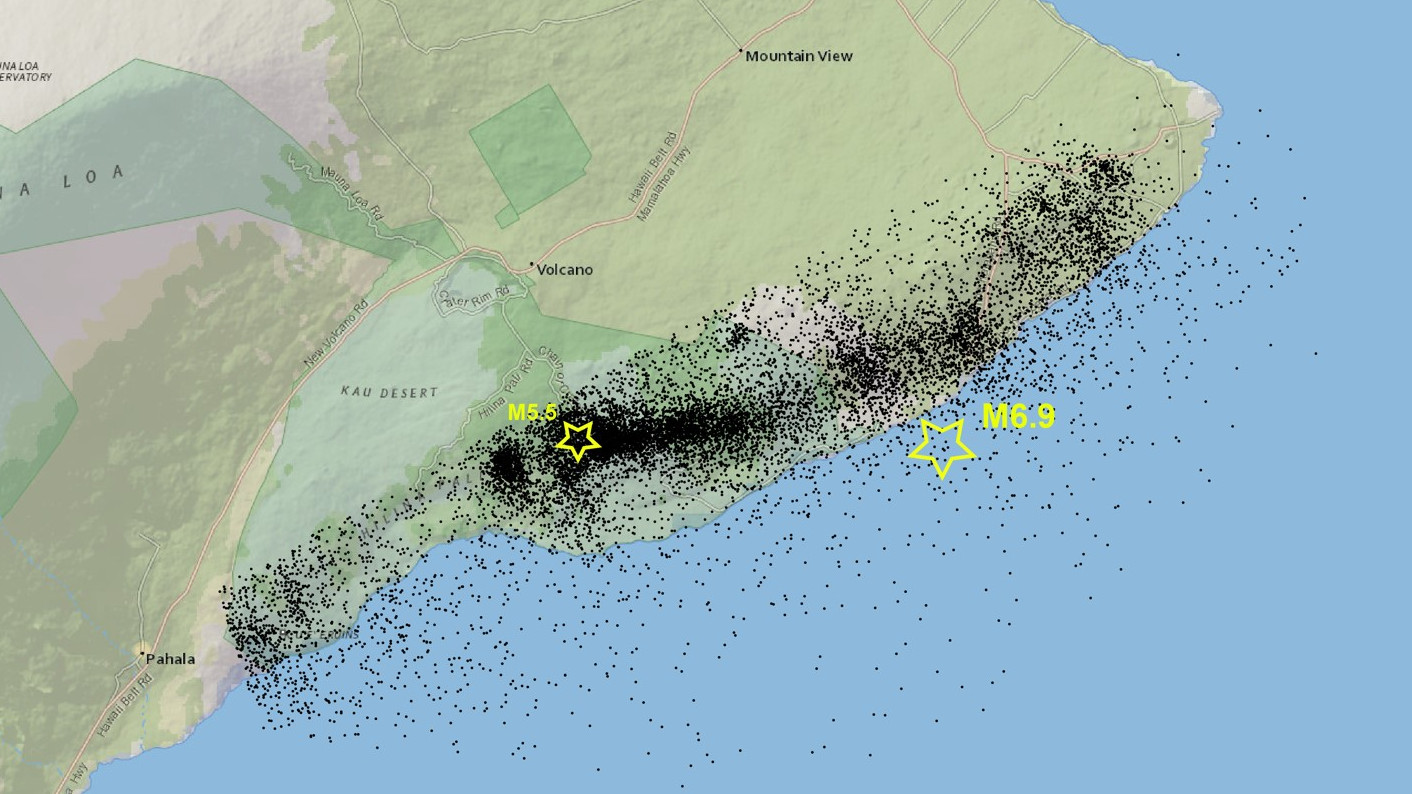 HAWAIʻI ISLAND - The USGS Hawaiian Volcano Observatory says this week’s earthquake does not signal an increase in volcanic activity, but a trend back to more typical seismic levels.

(BIVN) – Following the Magnitude 5.5 earthquake that jolted Hawaiʻi Island residents out of bed in the early morning hours on Wednesday, scientists with the USGS Hawaiian Volcano Observatory are examining the strong temblor in the context of the recent eruption of Kīlauea in this week’s Volcano Watch article.

The article, in which scientists confirm the Wednesday morning event was the largest of the thousands of aftershocks following the May 4, 2018 Magnitude 6.9 earthquake, explains why the earthquake was expected, and why it is “part of an evolution of Kīlauea seismicity back to more typical levels.”

Early Wednesday morning, just before 1AM on March 13, houses in east Hawai`i began to shake. Without a doubt, it was an earthquake. To those who endured the near-daily shaking from last summer’s collapse events at Kīlauea’s summit, this week’s earthquake was clearly different.

Geophysicists from the US Geological Survey’s Hawaiian Volcano Observatory (HVO) quickly verified that the earthquake did not originate from beneath Kīlauea Volcano’s summit region. Rather, the earthquake was centered 12 km (roughly 7 miles) south-southeast of Volcano Village, at a depth of 7 km (~4 miles) below sea-level. HVO reported the earthquake’s magnitude as M5.5.

Earthquakes at this location and depth in Hawaiʻi are due to movement along a decollement or detachment fault which separates the top of the original oceanic crust from the pile of volcanic rock that has built up to form the Island of Hawai`i. This is the same fault that was responsible for last May’s M6.9 earthquake.

In this regard, while not strictly predictable, this M5.5 was expected. And, we expect aftershocks to persist for several more years.

Importantly, though, this week’s earthquake does not signal an increase in volcanic activity. Instead, it is part of an evolution of Kīlauea seismicity back to more typical levels.

HVO’s seismographic network has expanded and improved since 1975. Studies of the 2018 M6.9 earthquake show the extent of earthquake fault movement to underlie a large portion of the island’s southeast coast. This is quite similar to the model computed for the 1975 earthquake developed with more limited observations.

Besides scientific interest in understanding how faults move during earthquakes, these models of fault rupture factor into considerations of possible tsunami generation and other earthquake impacts.

The timing of the events in 2018 – the draining of Puʻu Oʻo on April 30, the migration of earthquakes from Puʻu ʻŌʻō to Kīlauea’s lower East Rift Zone and breakout of lava in Leilani Estates on May 3, the M6.9 earthquake on May 4 and subsequent collapse of the floor of Kīlauea Caldera – suggests connections between and among these processes. Much of HVO’s work now is focused on describing these connections to much greater detail. As one of our colleagues wrote several months ago, our ultimate challenge is to understand what Kīlauea will do next.

For example, further seismological modeling offers insights into how the M6.9 earthquake rupture progressed in time and space along the decollement. This relates to redistribution of stresses beneath Kīlauea’s southeast flank due to the earthquake. The impacts of these stress changes on the rift zone and how magma was supplied to lower East Rift Zone eruption of 2018 remain to be studied.

Because of the overwhelming numbers of earthquakes recorded between April and August 2018, much of the continuing aftershock sequence awaits detailed review and analysis. As with any earthquake, the locations and the timing of the earthquakes will provide our first clues of why they happened. They will also help us piece together other important details of Kīlauea’s awesome 2018 sequence.