PĀHOA, Hawaiʻi - Officials with PGV, Ormat, HELCO, and the County of Hawaiʻi were present for Friday evening's community meeting in Puna. 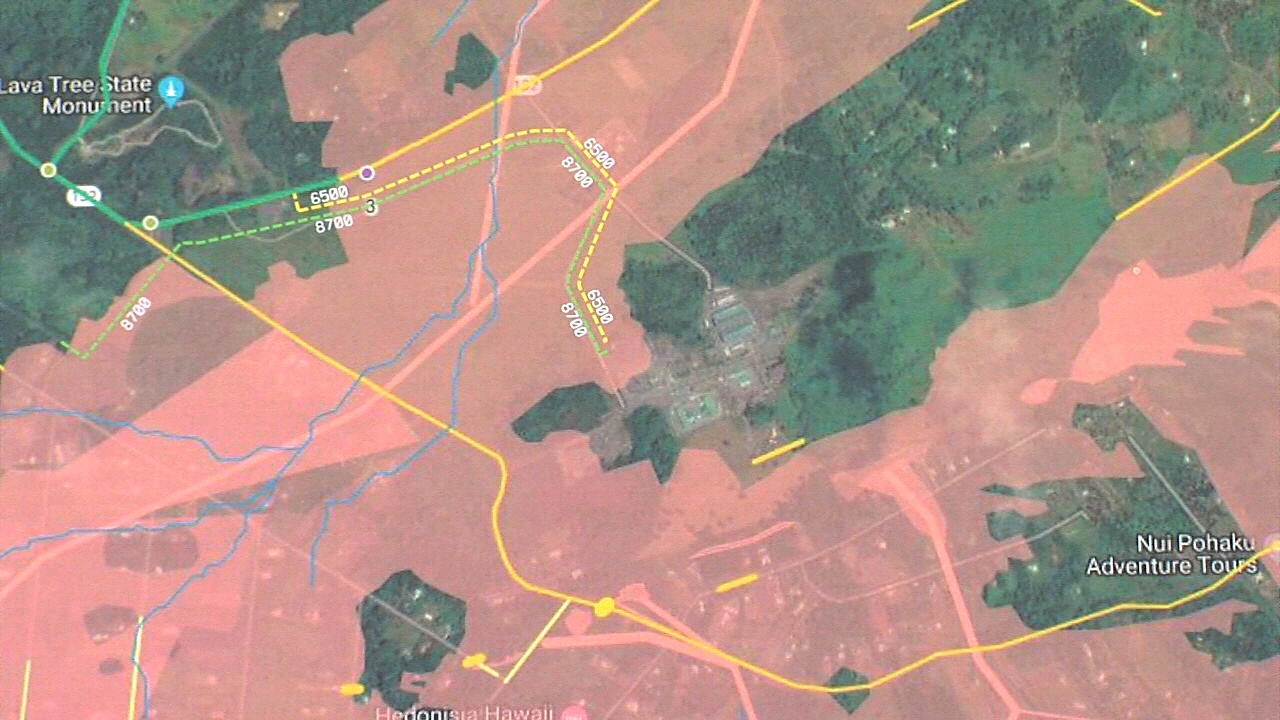 Map on display at the meeting showing the planned power transmission lines to the geothermal power plant.

(BIVN) – The Puna community gathered at the Pāhoa Community center on Friday evening for an update on the planned return of geothermal power operations in the area impacted by the 2018 eruption of Kīlauea Volcano.

Puna Geothermal venture organized the public meeting, and was joined by officials from the Hawaiʻi Electric Light officials and the County of Hawaiʻi. About 20 members of the public were present.

Jordan Hara, PGV plant manager, said that due to the corrosion issues, they have a big job rebuilding generators and everything at the plant. “We probably average of about 40 to 50 contractors on site giving us an hand, from all over the United States. plus we’ve got also hands from our other plants on the mainland helping us out.”

“We’re still assessing the wells and also the resource,” Hara said. “We got bunch of our equipment on site, so that’s ongoing currently. We did start assessing on KS-14 and then we’ll be moving over to the next well.”

Hara talked about the April 1st opening of Pioneer Road to residents of the Halekamahina kipuka, noting that the company has experienced some pros and cons on the road access.

After things went well for a week, Hara said PGV opened up the hours to 22 out of 24 hours, and the next day had “a guy sneaking in a guy in the trunk of his car,” and some people “swearing and yelling at our security.”

“When we do have incidents like that we will cancel waivers” to use the road, Hara said.

HELCO representative Kevin Waltjen talked about the Rebuild Agreement the utility has with PGV, and the recent Public Utilities Commission letter saying that public hearings will be necessary on transmission lines being installed for the facility.

“What that does is it establishes a line that allows us to connect to and bring service down to the customers that got access to that area,” Waltjen said. “And that’s important.”

Diane Ley, the director of Research and Development for Hawaiʻi County who is leading the community outreach effort on the Kīlauea eruption recovery, gave an update, noting that “we’re seeing resources start to flow to the county.”

“This week in the news was a big announcement from our congressional delegation,” Ley said. “About $66.8 million dollars coming down to the state of Hawaiʻi. Number one, that money is not all going to come to Hawaiʻi (Island). Some of it was is designated by Congress to go to Kauaʻi and Oʻahu for the flooding and landslide events there. It does not include Hurricane Lane, so that’s off the table for this disaster. There may be other appropriations that support that. This appropriation, we don’t know the details, yet. We’re waiting for a Federal Register notice to come out. But when it does, it’ll give more guidance as to what areas these resources can go to, and that can include rebuilding homes. And we don’t know if that means actual construction of homes or just infrastructure to support homes. It can help to rebuild infrastructure: lost roads, parks, water lines. It can support affected businesses, in terms of adjusting job losses impacts to tax revenues, job training, workforce development, and maybe even some loans and grants. We’ll see.”

The use of the funds will require an action plan that will need to be submitted to federal government for approval, Ley said.

Ley also noted that work continues on a risk assessment and vulnerability analysis. “We expected that to be out already, but it’s still taking some time,” ley said. “We’ve got great resource people that have the technical skills and and the scientific background put that together.”