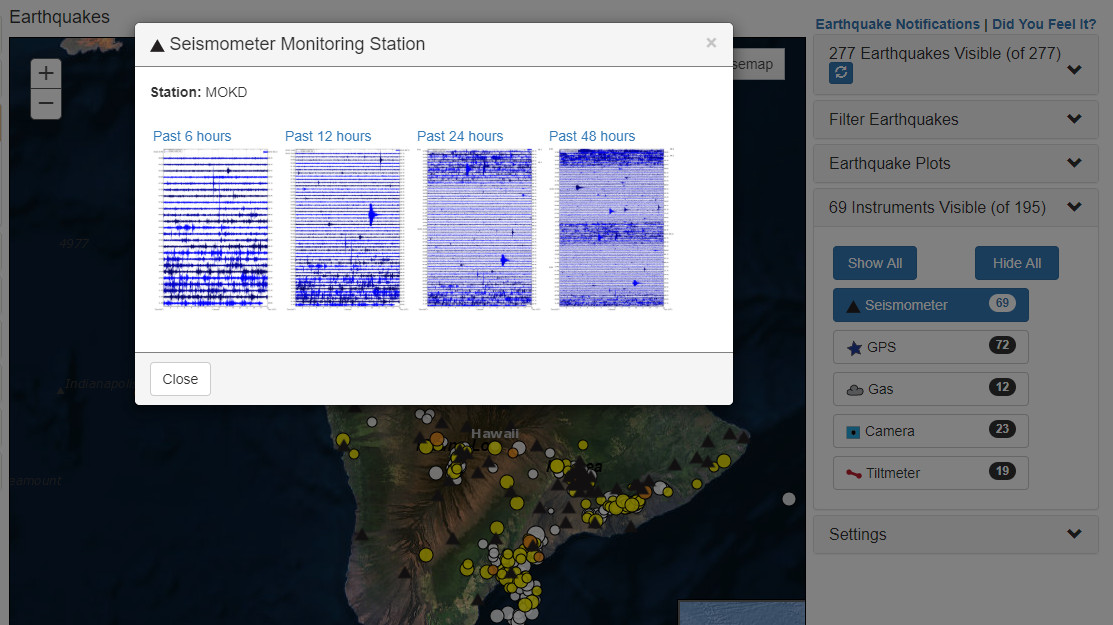 screen shot of some of the information presented on the USGS HVO earthquakes webpage.

The USGS Hawaiian Volcano Observatory says there was only one earthquake with three or more felt reports that occurred on Hawaiʻi Island this past week. That was a Magnitude-2.8 quake beneath Captain Cook on June 6 at 3:02 a.m. HST.

In this week’s Volcano Watch article, written by USGS HVO scientists and affiliates, a walk-through of all the publicly available data is provided.

The article also included a link to a USGS video on the subject:

The Volcano Watch article is entitled Seeing the Earth shake on your screen:

The USGS Hawaiian Volcano Observatory (HVO), along with its partners at NOAA’s Pacific Tsunami Warning Center (PTWC) and the National Strong-Motion Project (NSMP), operates a network of seismic monitoring stations on the Island of Hawai‘i and throughout the state.

HVO collects real-time data from these stations using computer processing software to detect, locate, and publish information about earthquakes that happen in Hawaii. The data are used for cataloging of earthquakes and for assessment of earthquake, volcano, and tsunami hazards, as well as for engineering purposes, such as structural monitoring.

All seismic data are freely available to the public. How can you view these ground motion data? There are several ways. Below, we walk you through two options.

If you follow our volcano updates, chances are that you already frequent HVO’s website. The earthquake page on this website, by default, shows recent earthquake locations. To also see the monitoring stations, click on the tab labeled “0 Instruments Visible” on the right side of the webpage, and then click on “Seismometer” to show seismic stations. Many black triangle symbols will appear on the map, indicating the locations of seismic monitoring sites.

Clicking on a particular station symbol on the map will reveal a pop-up window that shows four panels of seismic data plots, known as webicorders, for timespans of 6 hours, 12 hours, 24 hours, and 48 hours. You can click on each timespan to enlarge the webicorder. You can also click on the “Open Image” link on the lower right corner of the pop-up window to access the image files for downloading or bookmarking. This same process applies to viewing other types of HVO monitoring data, such as that from GPS and tiltmeter instruments.

The seismic webicorder plots available on the HVO website are digital versions of the paper seismic drum recorders used in past decades. Each line shows the seismic record for 15 minutes, starting from the upper left, with the latest time in the bottom right. Thus, you read a webicorder like a book, from left to right and top to bottom. The start time of each line is shown in local time (Hawai‘i Standard Time, or HST) on the left, and the end time of each line is shown in Coordinated Universal Time (UTC) on the right.

Seismic instruments are very sensitive and record anything that shakes the ground. So, wiggles on webicorder plots could be a record of wind, thunder, lightning, ocean waves crashing against the island, as well as of localized shaking from rockfalls, quarry blasts, or other explosions.

Earthquakes appear as blue smudges that often resemble a sideways tornado. Each has certain recognizable characteristics, including P- (primary) and S- (secondary or shear) waves, which may have a sharp onset and then decay to background level. Greater separation between P and S waves indicate increasing distance from the seismic station to the earthquake. Other types of earthquakes, for example those due to the movement of magma or gas, look different, generally with longer period energy that can persist over longer time frames.

Another way to find seismic data online is through the Incorporated Research Institutions for Seismology (IRIS) website. IRIS is the world’s repository for seismic data, including HVO’s. IRIS offers many ways to find, view, and download data for various purposes. One of the easiest and most convenient methods is with the IRIS Station Monitor tool, which can be accessed in a website browser or in apps available for iOS and Android devices. 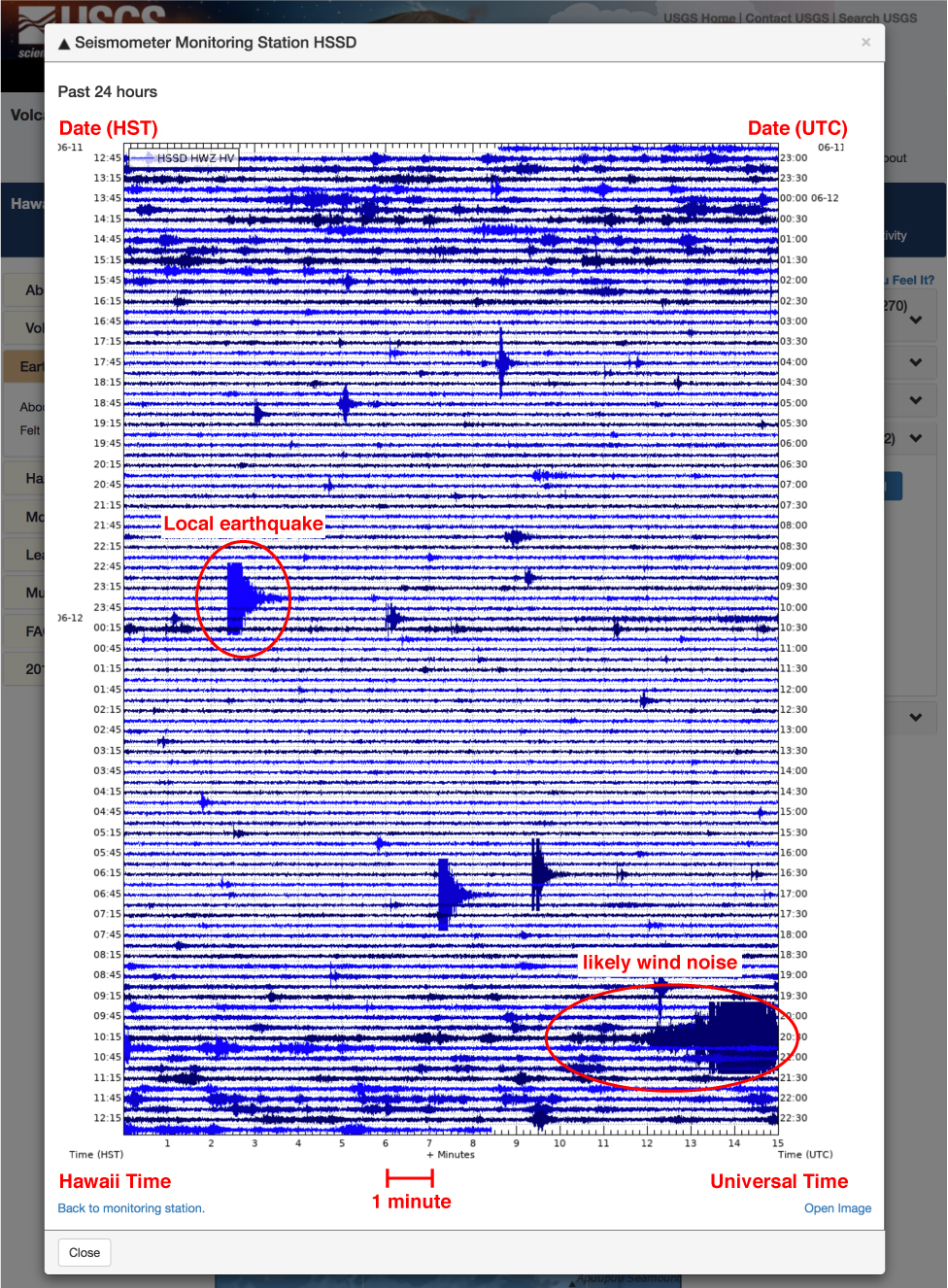 Screenshot of a seismic webicorder from the USGS Hawaiian Volcano Observatory website showing 24 hours of data from a seismic station located on the north flank of Mauna Loa Volcano. In this plot, several earthquakes are visible, along with wind noise.