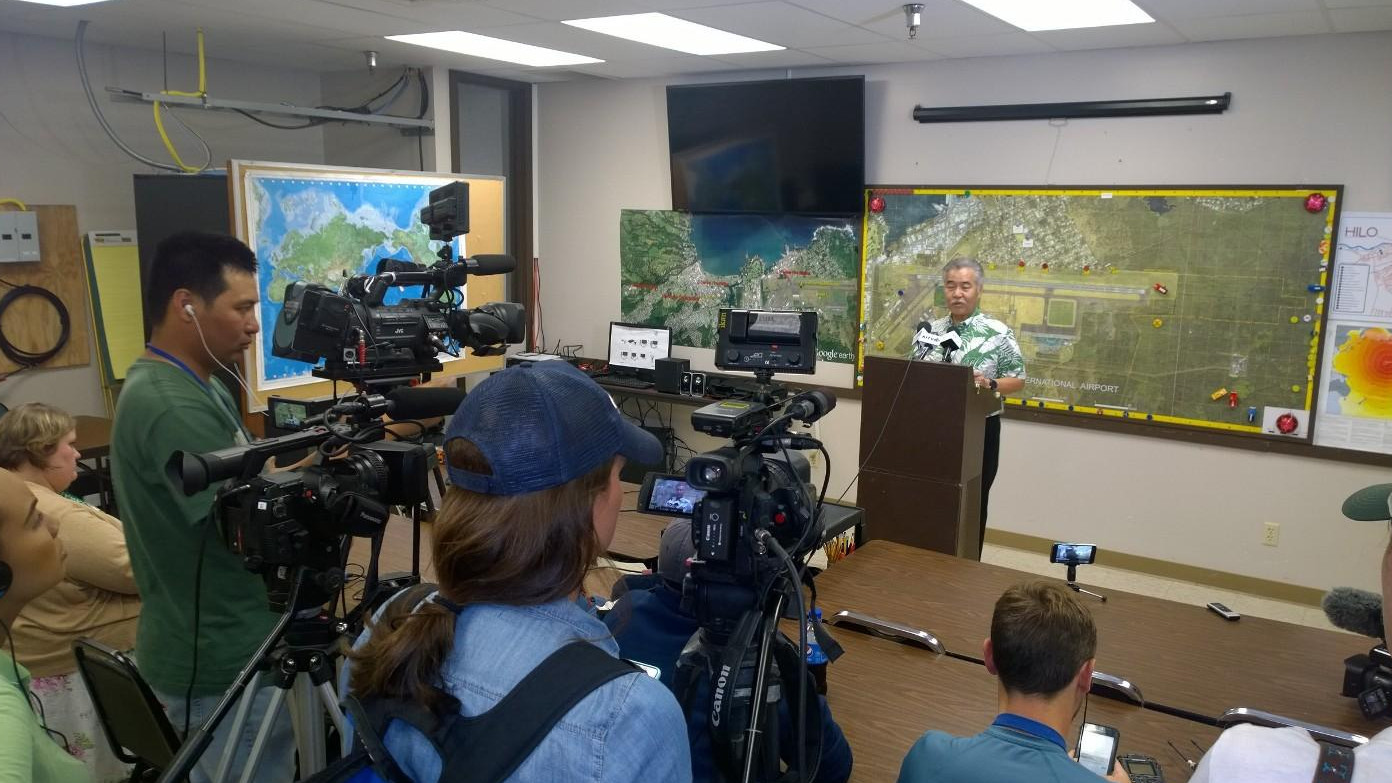 (BIVN) – Governor David Ige has decided “not to escalate the situation” at the base of Mauna Kea by calling in “additional National Guard troops at this time”, he said during a press conference today in Hilo.

However, the emergency proclamation remains in effect, apparently using “reports of drugs and alcohol use” at the Puʻuhonua o Puʻu Huluhulu as the basis for the proclamation due to “this unsafe situation”, he said.

Governor Ige spent the afternoon meeting with Mayor Kim and others to discuss the way forward with the Thirty Meter Telescope project, while other state officials spent the day saying they were unable to confirm whether or not he was on the island.

The press conference was held at 3 p.m. at the Hilo International Airport.

Video from Governor David Ige, livestreamed on Facebook on July 19, 2019.

Thank you for being here this afternoon. I spent the afternoon meeting with Mayor Kim and others to discuss the way forward with the Thirty Meter Telescope project. My number one priority has been and continues to be the safety of all people. I am committed to avoiding violence by anyone and keeping everyone safe. Because of this, I have decided not to escalate the situation by calling in additional National Guard troops at this time. I have never, ever, considered using tear gas at Mauna Kea. However, there are thousands of people on the mountain and I encourage all to remain respectful and calm. There are inadequate bathroom and rubbish facilities for this many people and we are seeing the impacts on the environment. Pedestrians are running back and forth across a major highway, at night, and in bad weather when visibility is poor. There are reports of drugs and alcohol use. There are many groups, and they don’t all agree about why they are there, or what they intend to do. Leaders of the Pu’uhonua have not been able to maintain order and the neutral terms of the Pu’uhonua. The emergency proclamation remains in effect because of this unsafe situation. This is a complicated set of issues and the emotions are fueled by a desire for many things Some of these issues we can work towards, some we can not. But I remain committed to finding those places of common ground. Both the mayor and I have had many discussions with many people, but many of the leaders of this protest do not want to meet. They would rather post to social media, spread rumors and fear, rather than engage in real world conversations about how we move forward together. Right now I am asking the leaders of this protest to commit to keeping everyone safe. To working together towards the many issues that are fueling the protest. We have lots to do. I will continue these conversations and I encourage others to join in the conversations, to talk about the many issues surrounding Mauna Kea.