HILO, Hawaiʻi - A request for a temporary restraining order to halt the planned construction of the Thirty Meter Telescope on Mauna Kea was denied today in circuit court. 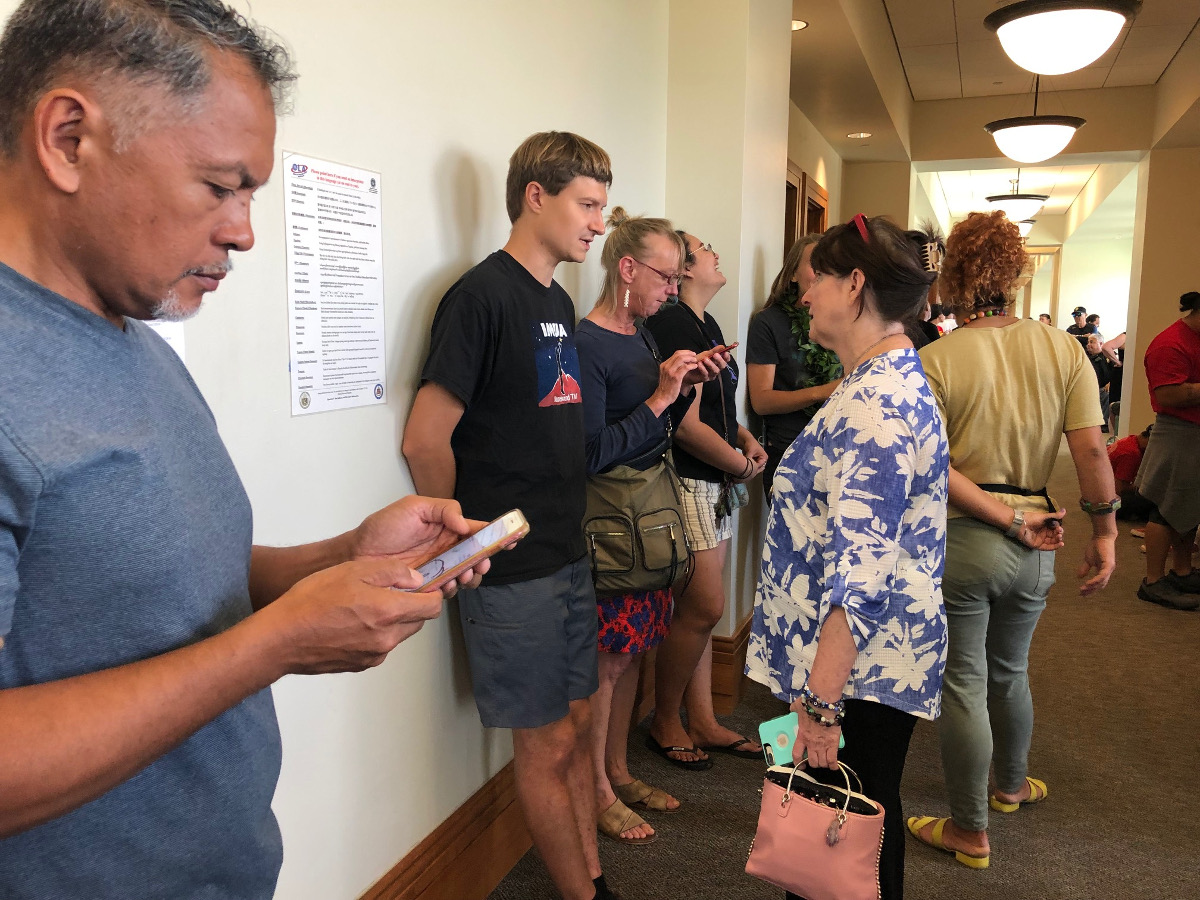 TMT supporters waiting outside the court room during the hearing.

(BIVN) – Without any evidence to show that the Thirty Meter Telescope is financially unable to complete the project, Hilo Circuit Judge Greg Nakamura on Tuesday denied a petition for a temporary restraining order to halt construction of the observatory on Mauna Kea.

The plaintiffs – Kealoha Pisciotta of Mauna Kea Anaina Hou, Paul Neves, Clarence Ku Ching, Kaliko Kanaele, Cindy Freitas, William Freitas, and Lanny Alan Sinkin – filed the petition over “UH and TMT’s failure to ensure” that the TMT project had “posted a security bond in the amount of the full cost of the project ($1.4 – $2 billion dollars) as the Mauna Kea Plan Of 1977 requires.” TMT opponents outside the court

TIO attorney Ing said the motion for a TRO “is an extraordinary remedy and they have to meet… three criteria. One is that they are likely to prevail on the merits of their claims, second that the balance of harm favors them, and third that it’s in the public interest that the TRO be granted.”

“So, the judge denied it on all three grounds and that’s essentially what happened in the court today,” Ing said. “Largely because the legal basis upon which they made their claims was defective and essentially not a good argument. The judge didn’t buy it. We had the support of the Hawaii Supreme Court’s decision of November 30th, 2018.”

“Law and order is one of the most obvious non-violence ways to address issues,” said petitioner Kealoha Pisciotta of Mauna Kea Anaina Hou following the decision. “What’s happening is really disappointing, because what we’re witnessing is the law always presuming that we’re the guilty ones, shifting the burden on us to prove what they must prove. It wasn’t our job to prove that they amended the 1977 plan. It’s their job to prove that they amended it. So, all they did was say that the 2009 plan overrides it. It doesn’t. And they know that.”

Pisciotta said that “judges have tendencies to believe the police officers, right? Same thing, they have the tendency to believe the University. But so far the university – when you look at all of the the history here – hasn’t been the one that’s been on the on the side of right, and in fact all the audits say so.”

“We’re getting tired of it and that’s why there’s so many people here,” Pisciotta said, “because we are tired of being criminalized and treated is if we are the ones who are lying.”