HILO, Hawaiʻi - Mayor Harry called a press conference on Monday to talk about recent meetings he has hosted in regards to the Thirty Meter Telescope project.

(BIVN) – Hawaiʻi County Mayor Harry Kim entered a room full of media at the Hilo county building on Monday with a somber expression.

Monday was the 15th day since the scheduled start of construction of the Thirty Meter Telescope on Mauna Kea. However, opponents of the TMT project have held their position on the Mauna Kea Access Road the entire time.

One week ago, with the state unable to clear the road for project crews to ascend the mountain, Hawaiʻi Governor David Ige turned things over to Mayor Kim, with the understanding that Kim would “attempt to reach common ground” with the opposition.

“I’ve never seen anything with so much polarization of people,” Kim said about the daunting task ahead, adding “and that’s where my mood is.”

The same day Mayor Kim took the lead, he joined Ige for the governor’s first visit to the Mauna Kea encampment. Since then, the mayor has been holding meetings in Hilo.

“I decided that need to call together leaders of the Hawaiian community, to seek guidance, to seek wisdom, and understand perspectives of the issues of Mauna Kea,” Kim told the media.

Kim said he was surprised that the so many attended the Friday meeting, which was called only the day before. 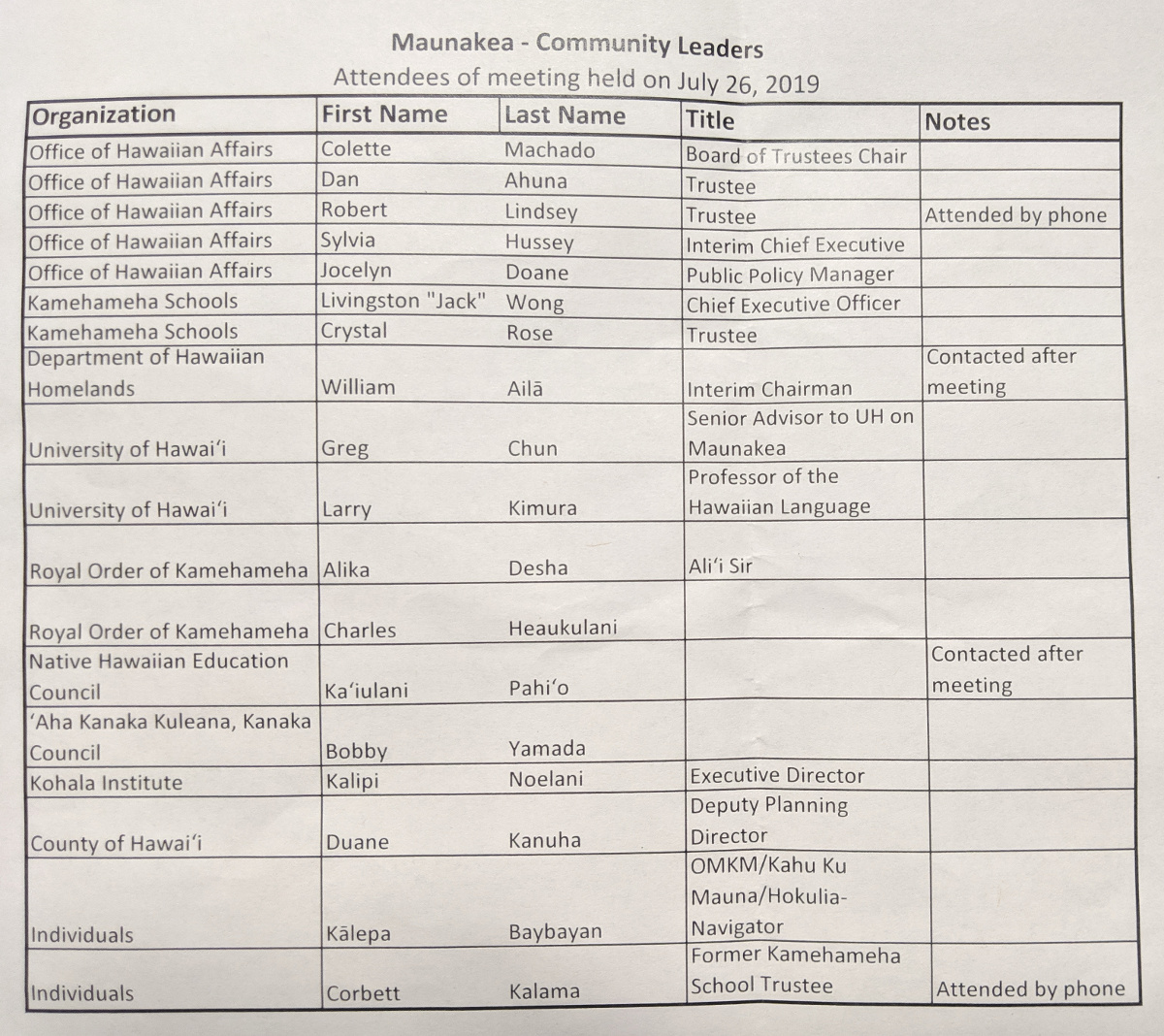 photo of the list of meeting attendees provided by Mayor Kim.

The mayor’s office provided a list of the attendees to the media. The only agreement that was reached was that they will all meet again.

On Monday, the Office of Hawaiian Affairs provided this statement:

First, we thank Mayor Harry Kim for convening last Friday’s meeting of Native Hawaiian community members to discuss Maunakea. The meeting provided the opportunity for participants to share our many different perspectives and manaʻo about the issue. The only consensus participants seemed to have reached was that these kinds of conversation should continue. OHA’s hope is that future meetings include members of the Kiaʻi.

Immediately following the meeting with Mayor Kim on Friday, we visited the Kiaʻi at Puʻuhonua o Puʻuhuluhulu and discussed how OHA can continue to support the rights, safety, and well-being of our beneficiaries engaging in peaceful protests of the state’s decades-long pattern of mismanagement of Maunakea.

“This will end,” Kim said about the divisive situation. “I don’t know how, but it will. And surely we still must remain a family.”

“I don’t think anyone had any concept that this would grow so much, so fast,” Kim said, reflecting on the size of the Ku Kiaʻi Mauna movement and the world-wide attention it has gotten. “I think what they did not understand, that I really believe, that this is not just about the mountain. This is not about just a telescope,” Kim said.

The mayor also mentioned traffic signals are being installed in the area of the Puʻuhonua o Puʻuhuluhulu and the Mauna Kea Acceess Road. The Hawaiʻi Department of Transportation later issued this news release:

The Hawaii Department of Transportation (HDOT) advises the travelling public of the installation of temporary traffic signals at the intersection of the Daniel K. Inouye Highway (formerly Saddle Road) and Mauna Kea Access Road. Work to install the temporary signals and barriers along DKI Highway will take place Tuesday, July 30 between 9 a.m. and 3 p.m.

During the work hours, traffic will be reduced to one lane through the intersection. Travel in both directions will be maintained through alternating traffic control.

The temporary signals and barriers are being installed to provide for safe crossing of DKI Highway. The highway’s posted speed limit is 60 mph. Motorists and pedestrians are urged to use caution through the area.

When asked if his support for TMT continues, Mayor Kim responded: “I support TMT done in a good way, in the right way. We use it as a tool to help the people of this island. I support TMT as an alternate to …. [the] major impact of tourism for a small place like Hawai’i, because I don’t want to be like Maui, Kauai, and Oahu – of such dependency on the resort industry, that is good, but not to dominate and we need alternatives.”

The mayor also reflected on the future possibility of clearing the road. “I don’t like physical force under any circumstance,” Kim said. “If you and I got to resort to physical violence to get something done, boy that says a lot.”

On the possibility of the National Guard being deployed to clear the access road, Kim replied: “I don’t want to even go there, mentally.”