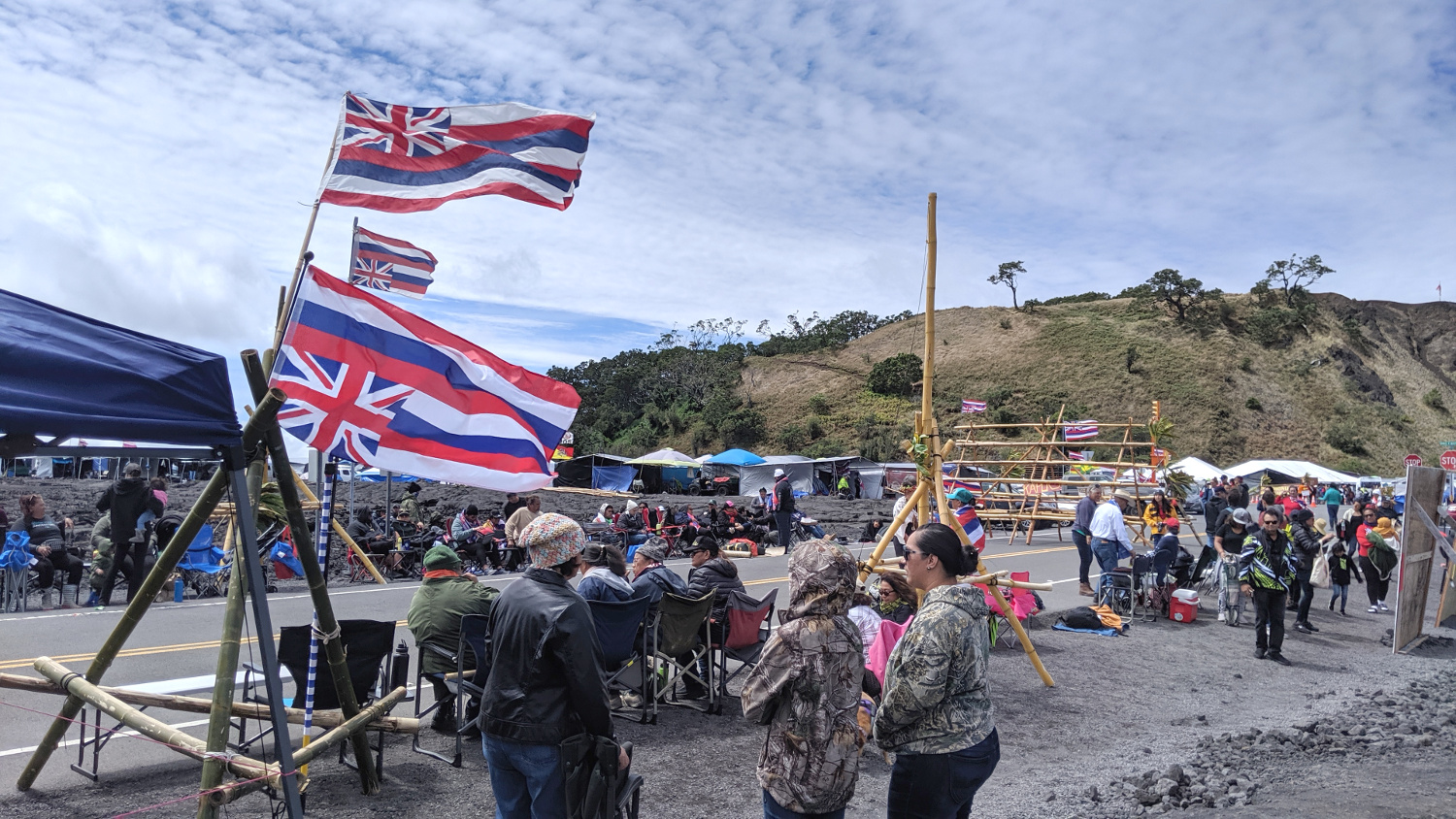 MAUNA KEA, Hawaiʻi - The hill at Puʻuhuluhulu has been closed, and TMT International Observatory posted a short video to social media on Saturday.

(BIVN) – Hundreds of TMT opponents again amassed at the base of Mauna Kea on Saturday, day 20 of the scheduled start of construction on the Thirty Meter Telescope project planned for northern plateau of the mountain.

As the threat posed by Tropical Storm Erick  passed, the kiaʻi maintained their position on the Mauna Kea Access Road, while law enforcement sat quietly watching the activity.

“We’re safe and warm,” said Kepa Kaʻeo, one of the Kanaka Rangers helping to organize the opposition effort, “but the elements – as you can see – is still, very high winds.”

The crowd was smaller than it was the previous Saturday. The day before, many sought shelter away from the encampment due to the possible impacts from passing Tropical Storm Erick.

“So what I think is happening is really a great thing,” Squires said. “TMT is becoming a catalyst for some of these bigger questions.”

Squires said it is a difficult time. “We’re hurting, and we certainly hear that the opponents are hurting, everybody is hurting at some level or another. But maybe there’s a way forward where some some real good will come out of this difficult situation.”

SQUIRES: “Maunakea remains the strong preference for TMT not just because it’s one of the best places in the world – if not the best place in the world – for astronomy, but but also really because of the folks in Hawaii and our supporters out there. You know, some of our TMT partners have been in the Hawaiian community for 50 years, as part of the community, and the connections between Japan and Hawaiʻi, and Canada and Hawaiʻi, and Caltech and UC and Hawaiʻi, are very strong. So we honor, really, the voices who are asking us not to go, who are honoring all the good work that TMT is already doing as part of the community in Hawaiʻi. And so we are strongly committed to to finding a way forward.”

“The puʻu, Puʻuhuluhulu, is temporary closed due to maintenance,” Kepa Kaʻeo said on Saturday. He said the Kanaka Rangers have been gathering data on the high foot traffic, “and we ended up giving it to the kūpuna to overview it, to see the substantial impacts that we must look at – and be cultural sensitive and environmental sensitive to – because this is a critical habitat.”

The trail to the top of Puʻuhuluhulu has been closed by kiaʻi since Monday, wrote Andre Perez on Facebook.

Hawaiʻi DLNR chair Suzanne Case and DHHL chair Bill Aila expressed their concern over the potential impacts to the Puʻuhuluhulu ecosystem in a recent editorial.

Kaʻeo said they are working on schedules “where we can take groups up and give them access for their cultural and spiritual rights.”

On Facebook, Governor David Ige commented on the TMT support rallies held at the Capitol this week, and said he is “committed to seeing the project move forward while keeping all involved safe.” The Governor posted:

Located above approximately 40 percent of the Earth’s atmosphere, Mauna Kea has a climate that is particularly stable, dry, and cold; all of which are important characteristics for capturing the sharpest images and producing the best science. For these and other reasons, Mauna Kea was chosen as the site of the telescope. For facts and more information, visit tmt.org

On August 6 in Hilo, Mayor Harry Kim’s administration is scheduled to provide a report to the Hawaiʻi County Council Finance Committee on expenses relating to Mauna Kea.

Puna councilmember Matt Kanealiʻi-Kleinfelder is requesting the report, and asked the Finance Department to cover:

The Council Finance Committee meeting will be held at 2 p.m. in the Hilo council chambers.