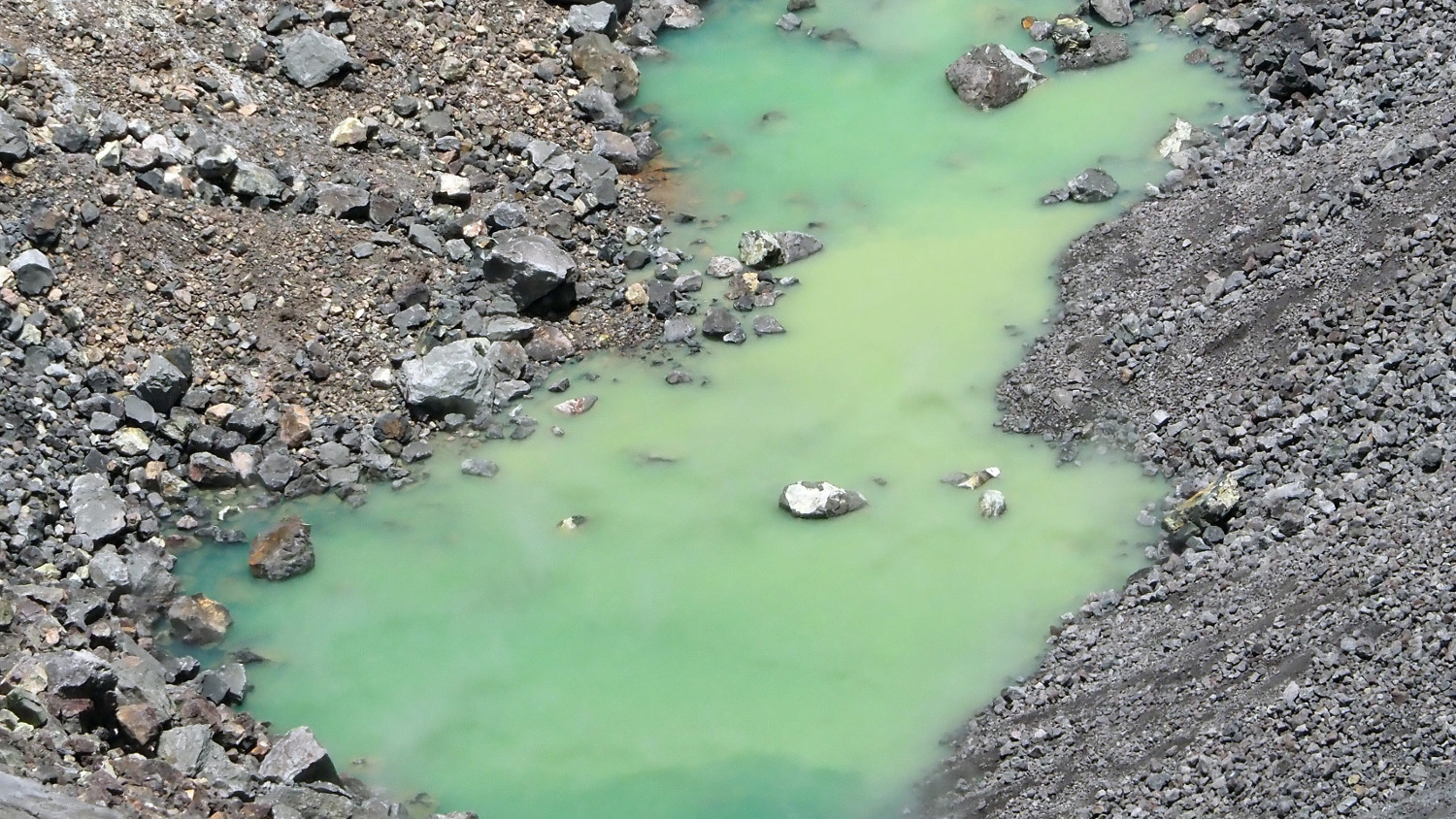 Close-up of Halemaʻumaʻu water pond as it appeared on August 14. USGS photo by D. Swanson.

VOLCANO WATCH: What Does Water At Kilauea Summit Crater Mean?

HAWAIʻI VOLCANOES NATIONAL PARK - This week, USGS scientists ask where is the water at the bottom of Halemaʻumaʻu coming from, and what is its importance?

These images look east at the pond within Halemaʻumaʻu on August 8 (left) and 14 (right), 2019. The pond widened mainly toward the south (right). The north-south width of the pond on August 14 was about 32 m (105 ft), about 10 m (35 ft) wider than on August 8. The pond has widened and deepened slowly and steadily rate since measurements began on August 3. USGS photos by D. Swanson.

(BIVN) – As the steaming water pond at the bottom of Halema‘uma‘u continues to rise, scientists are delving into the source – and importance – of the new feature.

The slowly deepening pond of water on the floor of Halemaʻumaʻu, the first in recorded history, has captured the interest of media and the public, both locally and nationally. Many questions are being asked. The two most frequent are, where is the water coming from, and what is its importance?

Two potential sources of the water are recent rainfall and groundwater. At this writing, either remains a possibility. Circumstantial evidence, however, favors groundwater.

Before the 2018 collapse of Kīlauea Volcano’s summit, geophysical data suggest that the water table near Halemaʻumaʻu was at about the same elevation as in the drill hole, but it was apparently drawn down during the collapse. The water table is likely recovering now, and as it rises, water inundates low areas such as the crater floor.

So far, the surface of the pond is rising slowly and steadily, consistent with a rising water table. The pond level should rise in jumps during downpours if rain is directly responsible for feeding it. Unfortunately, Halemaʻumaʻu has experienced no heavy rain since the pond was first observed on July 25, 2019. It would be best to sample the water and date it using isotopic means; rain would have today’s age, groundwater an older age.

How deep is the water? In the surface pond, no more than a couple of meters (yards). But the visible pond could be just the top of the saturated zone, which could conceivably be several tens of meters (yards) deep.

There is probably a bottom to the standing water, because heat in the plugged magma conduit below the floor of Halemaʻumaʻu would boil away water at some depth. But as the conduit cools, the floor of standing water could move downward, deepening the water body from below as well as at the surface.

This may seem academic, but the total thickness of the water body impacts potential hazards. A mere puddle would scarcely affect the next summit eruption. But, if rising magma had to penetrate several tens of meters (yards) of water, an explosive scenario that has played out in the past could repeat.

Given a thick water body, the rate at which magma rises through the water becomes crucial. Slowly rising magma will simply evaporate the water and emerge on the surface as a lava flow or even eventually form a lava lake.

Magma that rises rapidly does so because it is being powered by expanding gas bubbles within it. A classic example is a lava fountain, which is already fragmenting because of gas expansion before even reaching the ground surface.

If such rapidly rising, fragmenting magma meets water, the fragments transfer heat to the water far more efficiently than a continuous surface of magma (as with slowly rising magma). The result is that the water rapidly boils, creating steam that expands and adds to the explosive energy of what would be a lava fountain under dry conditions.

We are quite sure that this kind of explosion has happened repeatedly in Kīlauea’s past. Detailed study of textures of glass fragments in deposits some 400 years old provide evidence of water quenching. Chemical analyses of this glass show that the amount of dissolved water and sulfur is intermediate between that of magma before eruption and that in lava fountains, the result of water quenching the magma before most of the gas could escape.

If the water body is thin, even rapidly rising magma would not create large explosions because of the small amount of steam generated. If, however, the water is several tens of meters (yards) deep, locally powerful explosions could ensue, probably not large enough to diminish public safety but perhaps big enough to create a nuisance ash fall during unfavorable wind direction.

We have no way to anticipate when magma will begin to rise up the Halemaʻumaʻu conduit, much less if the rate of rise will be slow or fast. At present, monitoring data show no signs of impending eruption, and it could be years down the road before the next summit eruption happens.