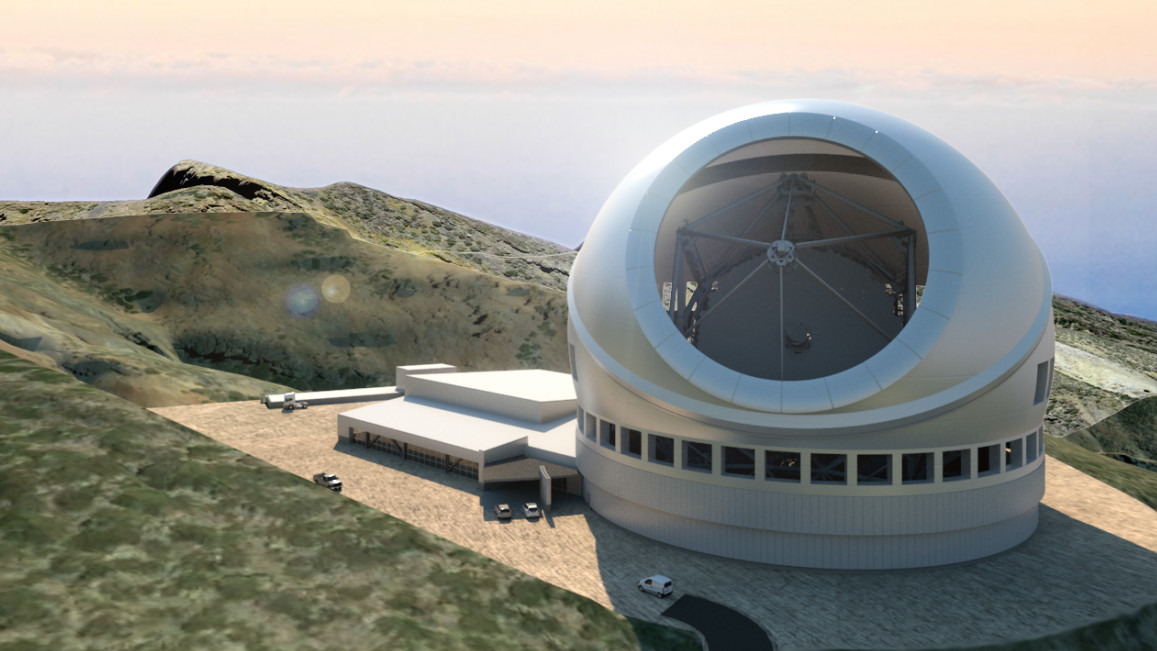 HAWAIʻI ISLAND - Astronomers who favor building the Thirty Meter Telescope on Mauna Kea are pushing back against a recent article that says the back-up site in La Palma is almost as good.

An August 25 Associated Press article – Hawaii or Spain? Telescope experts say it may not matter – reported TMT’s first choice, the northern plateau of Mauna Kea, is “just barely” better than the observatory’s second choice atop a peak in the Canary Islands.

A recent article published to Astronomy Hawaii disputes the AP story, saying that “Mauna Kea offers significant advantages over a backup location in La Palma,” according to “experts working in areas key for TMT’s science goals and familiar with different telescope sites around the Earth”.

“Mauna Kea will make TMT a more capable observatory than would La Palma and also allow TMT to even reveal objects invisible to upcoming NASA missions”, said Thayne Currie in the article. Currie is an astrophysicist at the NASA-Ames Research Center in Mountain View, California and expert on high-contrast imaging of extrasolar planets.

Opposition to TMT on Mauna Kea has halted the project in Hawaiʻi. It has been 53 days since the scheduled start of construction of the observatory, and crews have been unable to ascend the Mauna Kea Access Road due to the ongoing standoff. The State of Hawaiʻi recently granted the project a two year extension to start construction n order to meet its permit conditions.

Gordon Squires, TMT’s vice president of external affairs, said the observatory project “definitely” needs start “sooner than two years”, before the decision will be made to fall back on the Canary Islands site.

But astronomers who contributed to the Astronomy Hawaii article are not very enthusiastic about La Palma, when comparing the location to Mauna Kea. The article says:

A detailed report conducted by a team of expert astrophysicists verifies that Mauna Kea is “strongly preferred” to La Palma for TMT’s site. They found that Mauna Kea would even give TMT distinct advantage[s] over other upcoming observatories like the European Extremely Large Telescope (E-ELT). The report was led by Canadian astrophysicists and utilized site testing data for Mauna Kea and La Palma, international experts in relevant areas like adaptive optics, and feedback from TMT itself.

The back-up plan of moving TMT to La Palma is way for the project to stay alive, if the international group of partners agree. But it is also a potential pressure point for Hawaiʻi officials who want to host the observatory on Mauna Kea and are faced with the dilema of how to effectively clear the access road for construction crews. It is also a beacon of hope for TMT opponents who want the observatory to abandon its plan to build the telescope on Mauna Kea.

The validity of the narrative that La Palma is a comparable alternative to Mauna Kea is questioned in the Astronomy Hawaii article, which explains:

Mauna Kea’s biggest advantage over La Palma is that Maunakea is a colder and far drier site, making it far more suitable at wavelengths much longer than what the human eye can see. These “thermal infrared” (thermal IR) wavelengths are critical for many TMT science cases. For example, light from Earth-like planets around Sun-like stars is directly detectable in the thermal IR. The report concludes that TMT on Mauna Kea would be 4 or 5 times more effective than La Palma in the thermal IR and also more effective than the E-ELT, which is sited at Cerro Armazones in Chile.

The report also questions La Palma’s capability for adaptive optics (AO), a technology that corrects for blurring of the atmosphere due to turbulence to see rocky planets around the nearest stars and the center of our galaxy. La Palma has been touted as second only to Mauna Kea for adaptive optics. However, the report notes factors — such as “ground-layer turbulence” — that may make La Palma’s AO performance worse than advertised: much worse than Mauna Kea and perhaps not even any better than many sites in Chile.

“La Palma is just too low, too warm, and too wet to be competitive with Mauna Kea in the thermal IR and isn’t good enough with AO to really make up the difference. Some science, including that in exoplanets, La Palma might not be able to do at all but would be feasible from Mauna Kea”, said Currie, who is familiar with the source data for the report.

In addition to Mauna Kea, Currie suggested that multiple sites in Chile are overall superior sites to La Palma, including the location of Europe’s Very Large Telescope as well as its the future telescope, the 39-meter E-ELT.

Mauna Kea’s advantages over La Palma remain even when space telescopes are considered. The Associated Press article states that while TMT hopes to use its advanced optics to do some key science like yield direct images of “distant planets around bright stars”, including those with life, an upcoming NASA mission, specifically the James Webb Space Telescope (JWST), could provide those same data instead. As the article claims, “data from [JWST] could be combined with La Palma to compensate for Mauna Kea’s advantages”.

Professor Ben Mazin, physicist at the University of California Santa Barbara and leading expert in exoplanet direct imaging technology, draws a different conclusion: “While this is true for some science goals, like observations of high redshift galaxies, it is not true for all the science we want to do with TMT. JWST will have excellent sensitivity, but the small size (6-m) of the telescope means that it doesn’t have very good angular resolution. It can’t look at planets very close to a star [like rocky, Earth-like planets]. For imaging exoplanets in the near-infrared, JWST will be worse than the 10-meter Keck telescopes, let alone the 30-meter TMT.”

New technological innovations also do not necessarily undo Mauna Kea’s advantages. The Associated Press article mentioned a concept of combining large ground-based telescopes with a very large (tens of meters) “starshade”, a circular structure with petal-like edges that blocks starlight in orbit around the Earth. The article implied that the starshade could negate Mauna Kea’s advantage with adaptive optics.

However, Mazin argues that this idea is too speculative to consider for planning for TMT, saying it “is at a very early developmental stage and faces technical and financial obstacles.”

Currie concurred, adding “even if it somehow worked, starlight would still have to pass through an atmosphere. Advantage Mauna Kea.”

For other key science areas, not even speculative technological advances could compensate for La Palma’s shortcomings. Mazin notes that La Palma is at a higher latitude than Mauna Kea, perhaps too high to effectively see the center of our Milky Way. In fact, TMT was specifically designed to study the galactic center immediately after it is completed, “driving the requirements for one of TMT’s primary instruments”, said Mazin.

The Associated Press article also quotes Avi Loeb who says that while Mauna Kea is a better infrared site but argued these shortcomings could be compensated for with technology. Loeb is a theorist by training and best known for claiming ‘Oumuamua is an alien spaceship, which was recently refuted by a team including University of Hawai’i scientists.

Experts sharply disagreed. “Sure, technology makes generally things better, but you can’t just magically remove all the moisture in the air above La Palma. We don’t have a giant dehumidifier stretching up into the stratosphere,” said Currie. 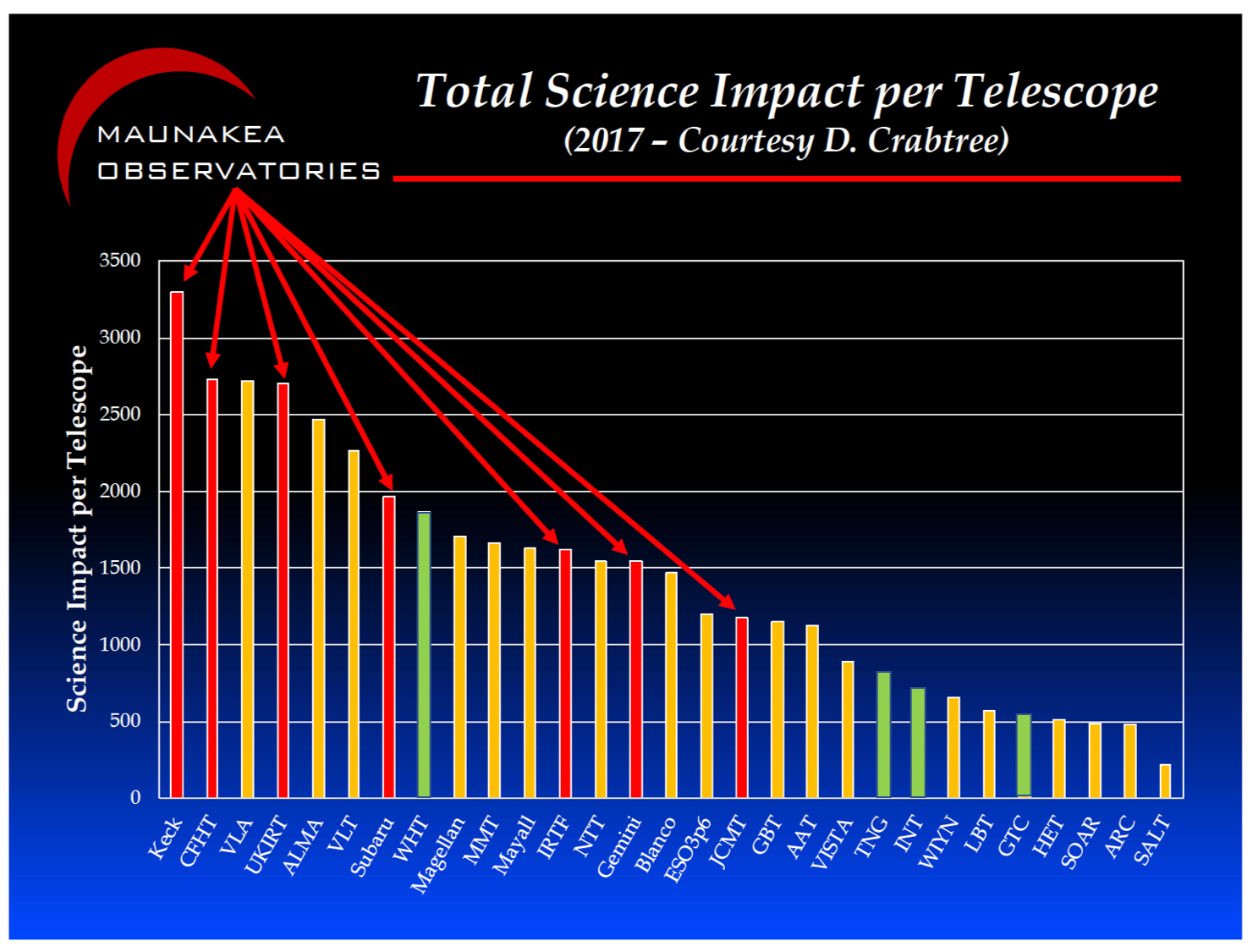 image, courtesy Astronomy Hawaii article, showing the science impact for different ground-based telescopes. Mauna Kea observatories are in red and those on La Palma are in green.

Science performance from current telescopes also implies that Mauna Kea would be a better site for TMT, concluded astronomer Roy Gal at the Institute for Astronomy, University of Hawai’i. He cites statistics that compare the scientific impact of ground-based telescopes across the globe, compiled annually by Dennis Crabtree of the National Research Council of Canada.

“Maunakea observatories are far and away the most scientifically productive on the planet. They account for 3 out of 5 of the most impactful, with Keck being number one. One of those top five is UKIRT, which weʻve agreed to decommission by the time TMT is operational,” noted Gal. “This is no accident – it is a testament to the superiority of Maunakea as an astronomical site. By contrast, the highest impact telescope on La Palma is ranked eighth, and the large aperture telescope there (The Gran Telescopio Canarias, or GTC) is number 25.”

Finally, La Palma faces its own opposition, in contradiction to the Associated Press article stating there is no significant opposition. There is, indeed, an environmental group in the Canary Islands named Ben Magec that has already voiced their strong opposition to the project and already won one legal challenge delaying any permit for TMT despite the Spanish government’s support of the telescope.

“This could slow things down a lot [for La Palma]”, said Mazin.

La Palma’s El Roque de los Muchachos Observatory, where the TMT would be located, “has full capacity to meet the scientific objectives of the TMT and provides very similar atmospheric characteristics to Maunakea at visible and near-infrared wavelengths,” says the TMT La Palma website.