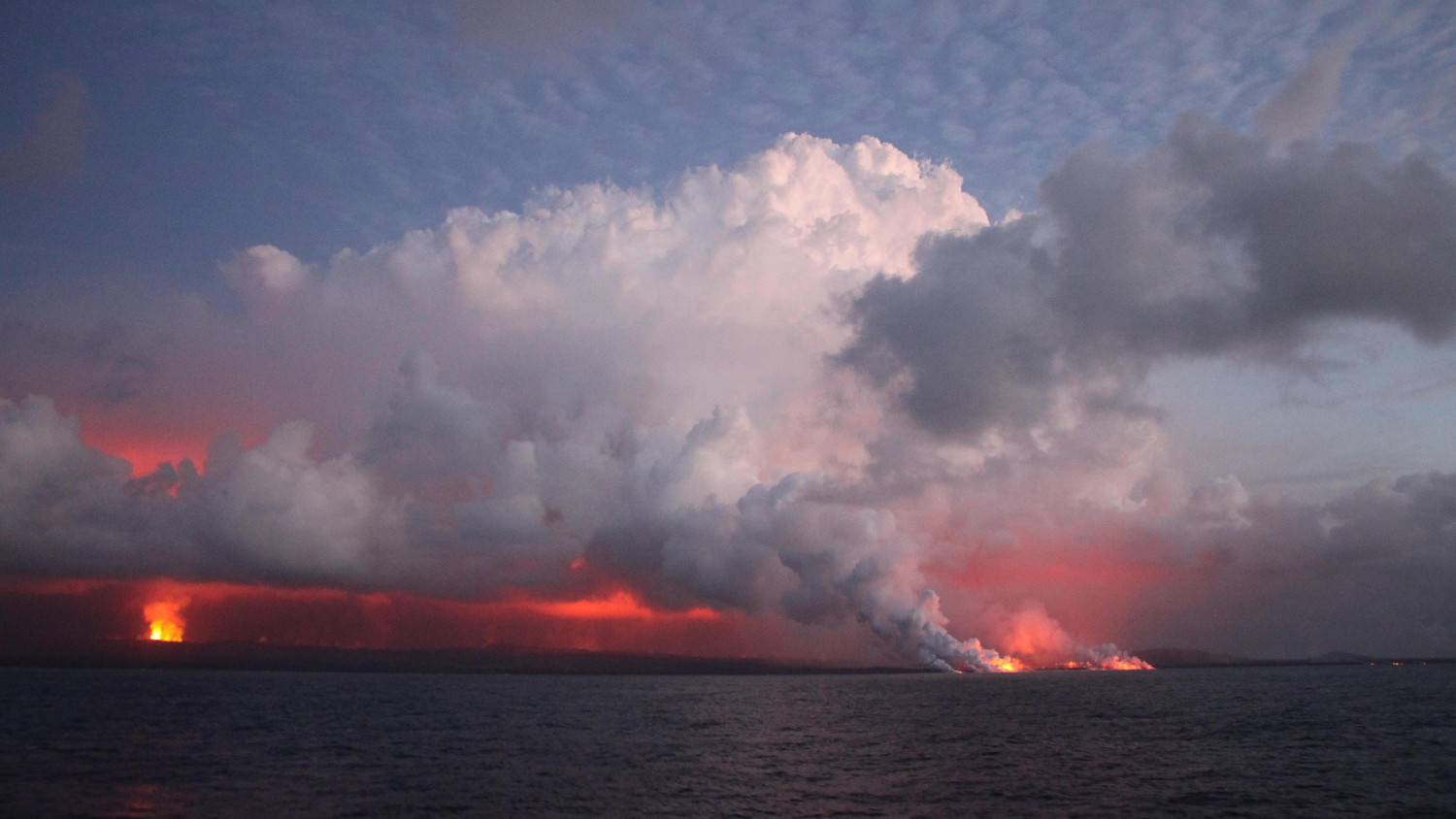 HAWAIʻI ISLAND - During the 2018 eruption, heat from the lava ocean entry caused nutrient-rich deep waters to rise, which led to a phytoplankton bloom, researchers say. 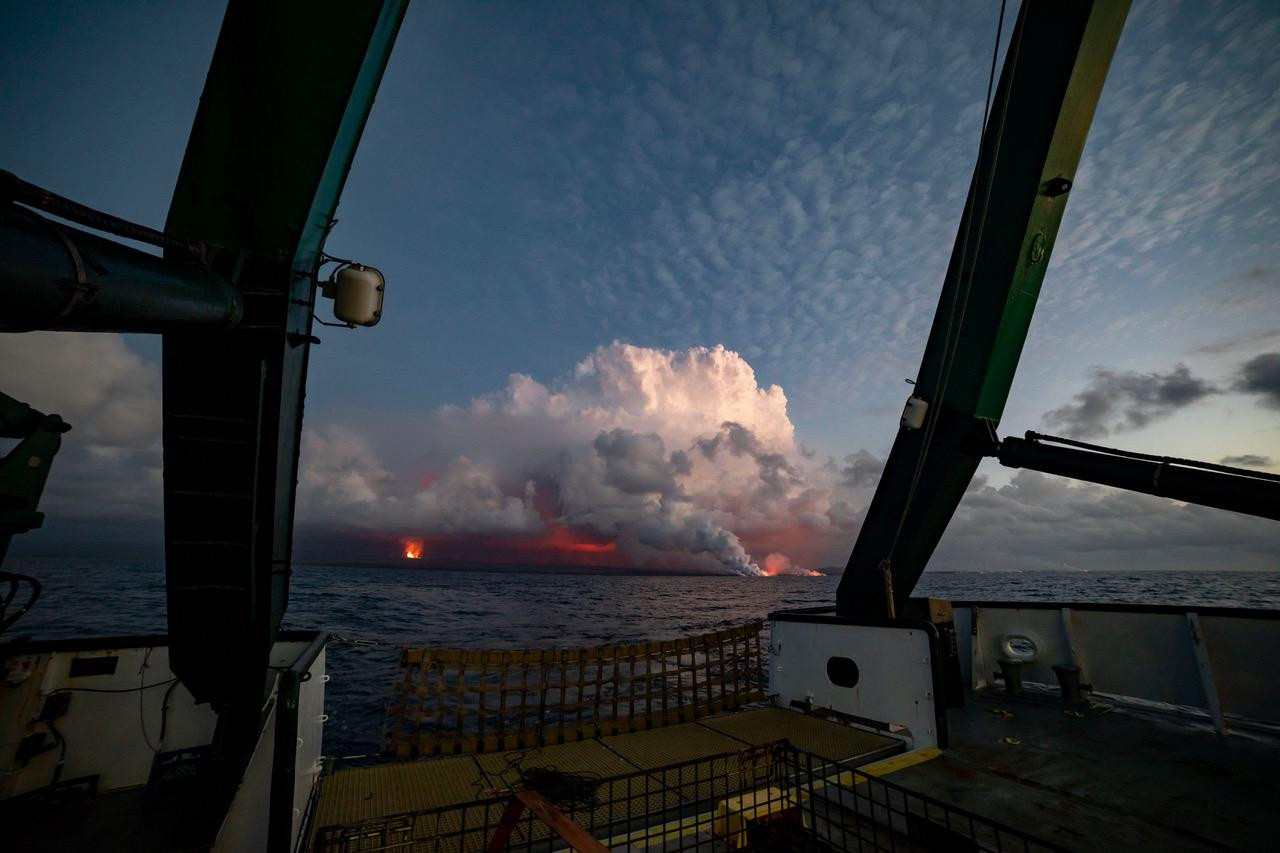 (BIVN) – The eruption of Kīlauea Volcano in 2018 brought about a voluminous – and destructive – lava ocean entry. Hundreds of homes and structures in and around Kapoho were destroyed and thousands of people were displaced. Beneath the seawater, scientists say the event also fueled a phytoplankton bloom.

On Thursday, researchers with the the UH Mānoa Center for Microbial Oceanography: Research and Education, or C-MORE, issued a news release about their findings.

When Kīlauea Volcano erupted in 2018, it injected millions of cubic feet of molten lava into the nutrient-poor waters off the Big Island of Hawai‘i. The lava-impacted seawater contained high concentrations of nutrients that stimulated phytoplankton growth, resulting in an extensive plume of microbes that was detectable by satellite.

A study led by researchers at the University of Hawai‘i at Mānoa and University of Southern California (USC) and published today in the journal Science revealed that this biological response hinged on unexpectedly high concentrations of nitrate, despite the negligible amount of nitrogen in basaltic lava. The research team determined that nitrate was brought to the surface ocean when heat from the substantial input of lava into the ocean warmed nutrient-rich deep waters and caused them to rise up, supplying the sunlit layer with nutrients.

After observing the phytoplankton bloom in satellite images, the UH Mānoa Center for Microbial Oceanography: Research and Education (C-MORE) organized a rapid response oceanographic expedition on UH research vessel Ka‘imikai-O-Kanaloa from July 13 to 17, 2018—in the thick of Kilauea’s activity. The team conducted round-the-clock operations in the vicinity of the lava entry region to test water chemistry and the biological response to the dramatic event.

Co-lead authors Sam Wilson at C-MORE and Nick Hawco, a USC researcher who will be joining the UH Mānoa Oceanography Department in January 2020, tested the hypothesis that lava and volcanic dust would stimulate microorganisms that are limited by phosphate or iron, which are chemicals found in lava.

As it turned out, since there was so much lava in the water, the dissolved iron and phosphate combined into particles, making those nutrients unavailable for microbes. Further, deep, heated seawater became buoyant and brought up nitrate which caused other classes of phytoplankton to bloom.

It is possible that this mechanism has led to similar ocean fertilization events in the past associated with the formation of the Hawaiian Islands and other significant volcanic eruptions, the authors suggest. Depending on their location, sustained eruption on this scale could also facilitate a large flux of nitrate from the deep ocean and perturb larger scale ocean circulation, biology and chemistry.

“The expedition in July 2018 provided a unique opportunity to see first-hand how a massive input of external nutrients alters marine ecosystems that are finely attuned to low-nutrient conditions,” said Wilson. “Ecosystem responses to such a substantial addition of nutrients are rarely observed or sampled in real time. UH has a strong tradition of not only volcanic research, but also looking at its impacts on the surrounding environment such as the ocean, groundwater, atmosphere. This latest piece of research improves our understanding of lava-seawater interactions within the much broader context of land-ocean connections.”

“Science is a team sport,” said Dave Karl, senior author and co-director of the UH Mānoa Simons Collaboration on Ocean Processes and Ecology (SCOPE). “SCOPE emphasizes collaboration, where scientists with complementary skills came together to complete this unique, interdisciplinary project.”

The article finished by saying that in the future, “the team hopes to sample the newly-formed ponds at the bottom of the Halema‘uma‘u crater and further investigate lava-seawater interactions in the laboratory.”

USGS HVO: “… when comparing views of the pond over several days some differences can be seen, as shown in these images. Rocks that were visible in the water on September 2 could no longer be seen today (September 5). Note particularly that two rocks protruding above the water at the top of the September 2 photo are now submerged—evidence that the pond continues to slowly rise.” USGS photos by D. Swanson.

Scientists with the USGS Hawaiian Volcano Observatory have been eager to sample the water pond at Kīlauea’s collapsed summit. The pond has a milky, green color, but scientists need more data to understand its composition, and possibly its origin.

“Until we get a sample of it, we can’t say for sure,” said USGS HVO geophysicist Jim Kauahikaua during a recent radio interview. “But there are many lakes within volcanic craters around the world and they have a similar color and we think that’s due to absorption of sulfur gas. We’ve been measuring very low sulfur dioxide emission rates in the crater since the collapse last year. One possibility is some of that SO2 is being scrubbed out by the water. It’s soluble in water. So the water may be very acidic because of that sulfur content. We are working on some proposals for getting a water sample, either with a helicopter or a drone. We’re working very closely with the National Park to see what will work for everybody.”