(BIVN) – Four Hawaiian beneficiaries and leaders in the Ku Kiaʻi Mauna movement are giving notice that they intend to sue over an alleged breach of trust over the Mauna Kea Access Road.

On Saturday, surrounded by supporters at the base of Mauna Kea, three of the four – Pualani Kanakaʻole Kanahele, Samuel Kaleikoa Ka’eo, and Edward Halealoha Ayau – held a press conference and signed their name to the notice.

Keliʻi “Skippy” Ioane, the fourth name on the notice, signed the document previous to the press conference.

As the only safe route to the summit for heavy machinery, the Mauna Kea Access Road is the focal point of the standoff over the Thirty Meter Telescope.

The notice is to the Hawaiʻi Department of Transportation director Jade Butay, members of the Hawaiian Homes Commission, Attorney General Clare Conner, and the TMT International Observatory. In 60 days, the notice anticipates a lawsuit for a breach of trust duties in the absence of corrective action related to land exchanges to compensate for what they argue was the illegal taking of streets and roads. 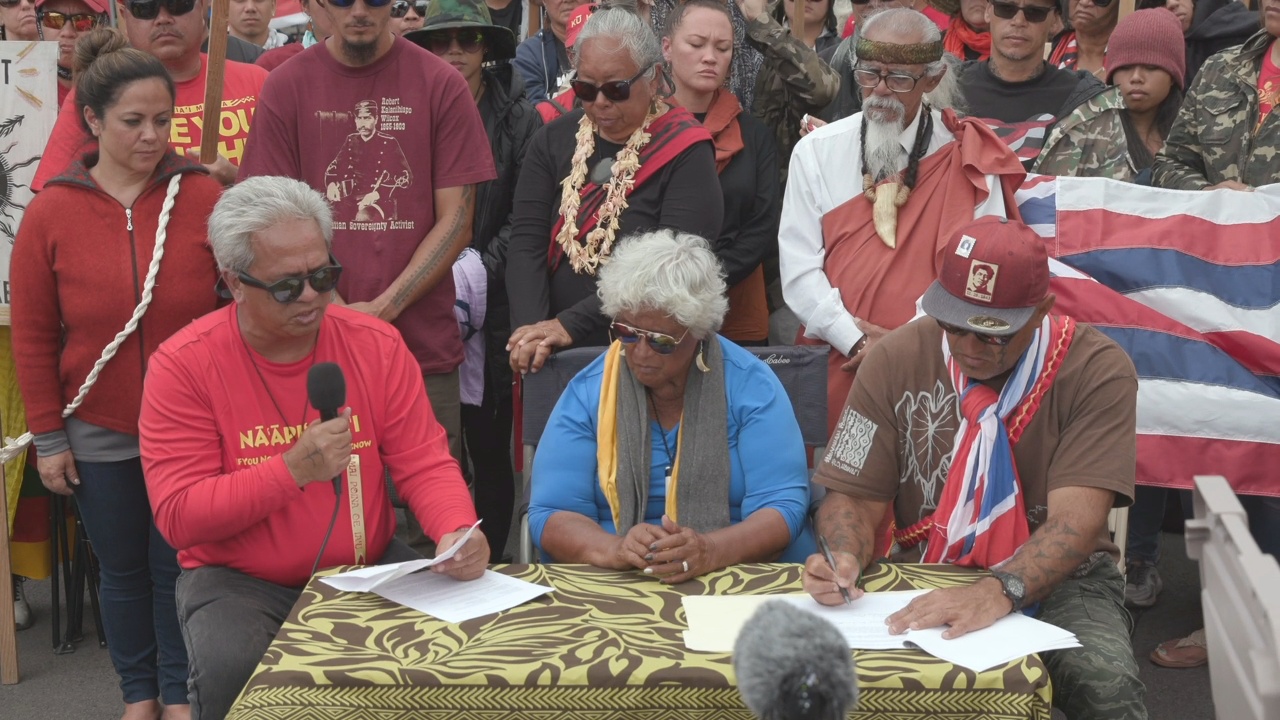 Ayau said they plan to sue, “not because we try to make trouble or because we have nothing better to do. We do it as a sense of responsibility, of kuleana of what Kūhiō intended for this program to be. If you read the purpose of the Commission Act, all of the programs of the Department of Hawaiian Homes Lands is intended to perpetuate the values and practices of the Hawaiʻi people.”

The question of “who owns the Mauna Kea Access Road” was briefly debated during an August 14th State Senate Hawaiian Affairs Committee meeting.

“State DOT has controlled and maintained Mauna Kea Access Road since it became part of our highways system in 2018,” said DOT Deputy Director Ed Sniffen. “Prior to that time, sections of the road situated on Hawaiian home lands were maintained by the County of Hawai‘i pursuant to a Memorandum of Agreement (MOA) between DHHL and the County of Hawai‘i.”

In the coming days, TMT opponents believe the state will move to clear the road to make way for the project.

“To all of our Kiaʻi Mauna, now is the time,” wrote the Puʻuhonua o Puʻuhuluhulu in an alert message. “Maunakea needs you. See you on the Mauna.”

The Notice Of Intent To Sue reads:

Pursuant to HRS § 673-3, please consider this letter a sixty-day notice of intent to sue appropriate officials of the State Department of Transportation (DOT) and State Department of the Attorney General (DAG) for breaches of their trust duties under the HHCA and Haw. Const., Article XII, §§ 1, 2, and 3.

In 1995, with the passage of Act 14, the State of Hawai‘i pledged to enter into land exchanges to compensate the HHCA trust for 346 acres of land, which it, through its various agents, illegally took. Despite this enactment, responsible officials from the DOT, DLNR, Office of the Governor, and the DAG failed to initiate those land exchanges. Moreover, they failed to undergo the procedures mandated under 43 CFR Part 47 to seek the approval of the U.S. Secretary of Interior, pursuant to HHCA §204. These omissions not only deprived, for the past 24 years, the HHCA trust res of these lands improperly, they also resulted in the deprivation of compensation for use of these lands. The historic failing to fund, or to under-fund, the administration and homestead programs of the HHCA for most of the period following statehood in 1959 have only compounded these deprivations of compensation for illegal taking of HHCA trust properties. Haw. Admission Act, §4; Haw. Const., Art. XIl, §1.

These omissions constitute another series of new and independent breaches of trust for failure to implement the terms of Act 14, which were designed to fully and finally remedy the breaches of trust associated with the taking of these same trust lands. These new breaches compound the effect of the State’s egregious, if not previously condemned, pattern of:

– Assuming jurisdiction and control of HHCA trust lands under roads and highways improperly built by the state even before land exchanges have been completed and formal title of those HHCA trust lands passing from the DHHL;

– Failing to initiate appropriate land exchanges as contemplated in Act 14, §6 for HHCA trust lands under roads and highways improperly built by the state;

– Failing to follow federally mandated procedures to seek approval of the U.S. for all land exchanges, prior to surrendering jurisdiction and control of HHCA trust lands underlying roads and highways improperly built by the state, which would have triggered opportunities for beneficiary consultation on the merits of and proposed exchange and whether such proposed land exchanges advance their interests of native Hawaiian beneficiaries, pursuant to 43 CFR §$47; and

– Causing and/or permitting state law enforcement officers to arrest beneficiaries of the HHCA trust on the MAR with no rightful jurisdiction, control, or authority, given the failure to initiate appropriate land exchanges to compensate for the taking of HHCA trust lands underlying the MAR.

Native Hawaiian beneficiaries, including Pualani Kanaka‘ole Kanahele, Keli’i “Skippy” loane, Edward Halealoha Ayau and Samuel Kaleikoa Ka‘eo, hereby seek corrective actions by the appropriate state officials, by immediately ceasing its above cited activities and taking all required actions contemplated under Act 14 to compensate the HHCA trust before asserting jurisdiction and control over any of the 346 acres illegally taken from the trust for roads and highways.

In addition, these practices also implicate the HHC/DHHL for breaches of the HHCA trust, when its officials are, contrary to past recommendations of the 1983 Federal State Task Force on the HHCA:

– Failing to retain and assert jurisdiction and control over roads and highways improperly built by the state over HHCA trust lands and targeted for compensation through land exchanges by Act 14 (SLH 1995, spec. sess.), for which the State never even initiated land exchanges, over more than two decades;

– Failing to demand the enforcement of, including filing suit to enforce provisions of Act 14, §6 for the past 24 years to compel the initiation of appropriate land exchanges to compensate for (1) the loss of 346 acres underlying roads and highways improperly built by the state and illegally taken from the trust res, and (2) the payment of market rent for the unauthorized use of those HHCA trust lands throughout those years;

– Resisting the assumption of, and claim to, jurisdiction and control over HHCA trust lands underlying roads and highways improperly built by the state before it has fully paid fair compensation to the HHCA trust, and following 43 CFR Part 47 procedures to obtain U.S. Secretary of interior approval of any appropriate land exchange; and

– Failing to abide by its exclusive duty of loyalty to its beneficiaries being arrested by law enforcement officials on HHCA trust land underlying the MAR, without authority from the HHC, while these beneficiaries engaged in peaceful assembly while observing under Kapu Aloha.

We, Native Hawaiian beneficiaries Kanaka‘ole, Ioane, Ayau and Ka‘eo will be asking for all allowable judicial remedies pursuant to HRS chapter 673, including reasonable attorneys’ fees pursuant to HRS 673-5, if the aforementioned officials fail to initiate the appropriate corrective actions to address these trust breaches.

This letter should also be considered a forty-day notice of intent to sue TMT pursuant to HRS §607-25 for its planned construction activities to erect a structure and conduct industrial operations in violation of HRS chapter 205, the associated Land Use Commission rules, land use classifications, and other provisions. See, HRS §607-25(c). We, Native Hawaiian beneficiaries of the HHCA urge TMT to refrain from violating HRS chapter 205 by abandoning immediate planned construction of the TMT observatory and seeking the required reclassification of the lands on which it plans to build the TMT from Conservation to Urban.