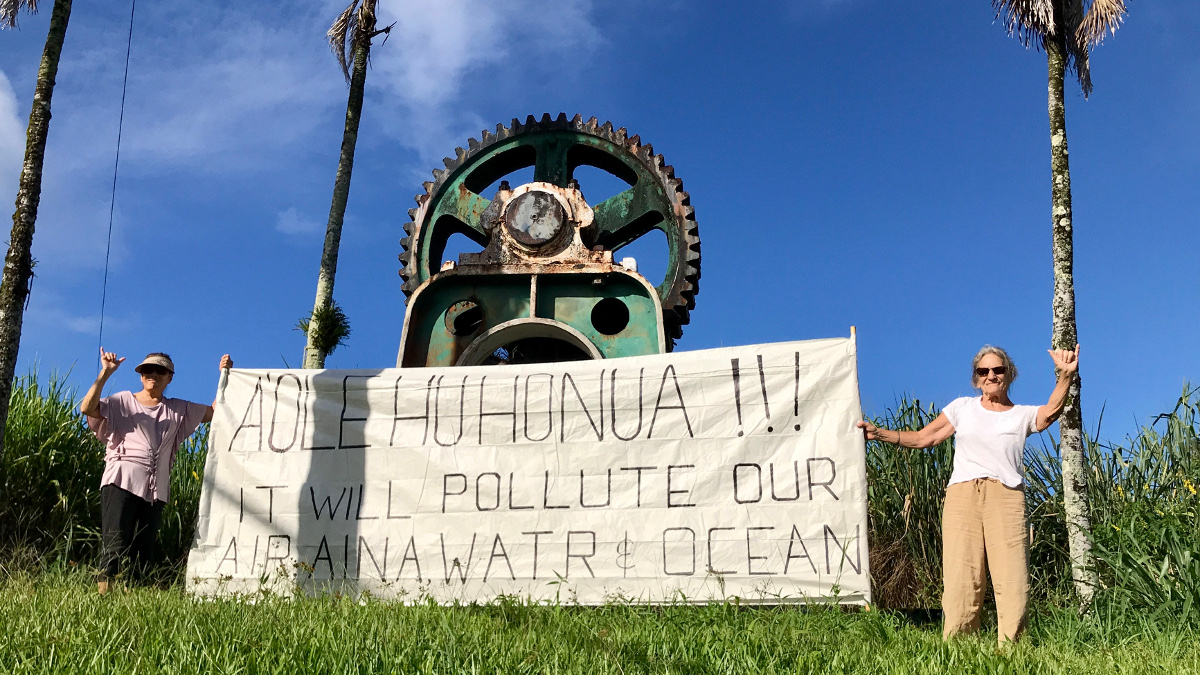 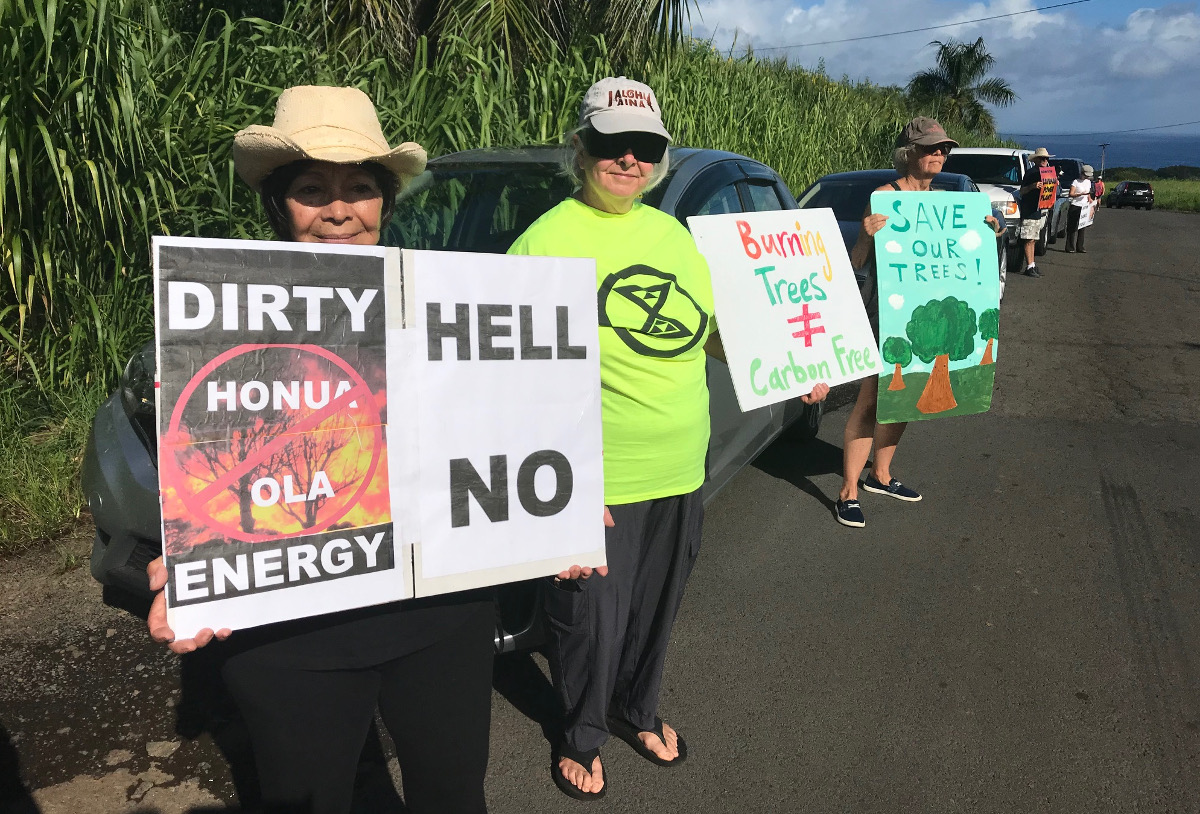 (BIVN) – Hū Honua Bioenergy, the company that plans to burn trees to produce energy using the refurbished and refitted Pepeʻekeo power plant, is actively courting the community for support, as environmental activists continue to fight the project.

On Wednesday, Hū Honua – which is now branded Honua Ola Bioenergy – and the the Hawaiʻi Island Chamber of Commerce held a “business after hours” event at the site of Pepeʻekeo facility. Participants were offered a tour of the facility, as well as “pupu, refreshments, sweets and great giveaways!”, according to an event flyer. 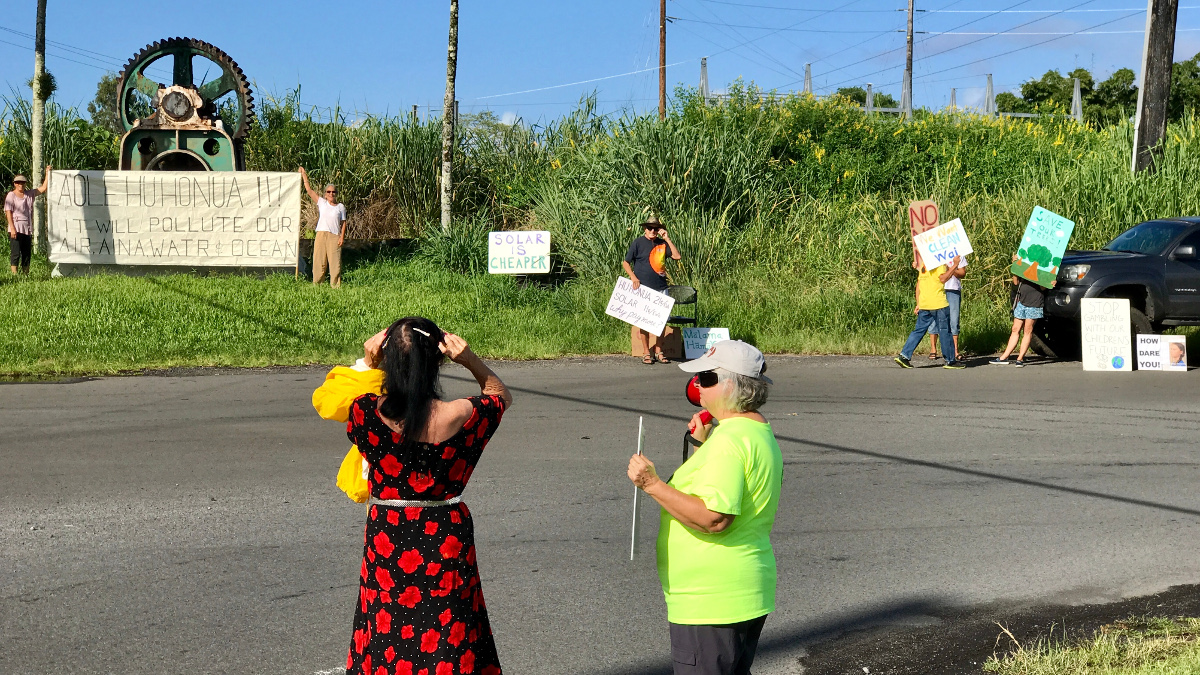 On September 24, the Hawai‘i Department of Health granted a request from Hū Honua for a revision to its Underground Injection Control application. The biomass company now “proposes to use cooler saline water for condenser cooling instead of the fresher upper aquifer water,” the health department said. “The cooler saline water will be extracted from three (3) deepened onsite supply wells.”

Hū Honua previously requested to deepen the three injection wells from 400 feet to 800 feet. “The proposed change to saline cooling water lessens the potential for fresh water aquifer contamination and is expected to lower the temperature of the condenser cooling water being discharged into the environment,” health officials reported.

A permit to operate the injection wells – which will have to be capped after injection testing – will not be issued until the health department is satisfied with the results.

On July 28, 2017, the Hawaiʻi Public Utilities Commission approved an Amended Power Purchase Agreement between Hū Honua and HELCO (docket 2017-0122). The Life of the Land environmental nonprofit organization – which was granted limited participation in the docket – appealed the decision, arguing that the PUC failed to explicitly consider greenhouse gas emissions in determining whether to approve the Amended PPA, as required by state law. The case went to the Hawai’i Supreme Court. Oral arguments were heard on October 25, 2018.

On May 10, 2019, the Hawaiʻi Supreme Court ruled the PUC failed to expressly consider the reduction of greenhouse gas emissions in its decision-making, vacated the PUC’s approval of the Hū Honua / HELCO Amended PPA, and remanded the matter back to the PUC. It took another month for the court to file its Judgement on Appeal. In the time between, Hū Honua representatives expressed concerns with the delays in the process. 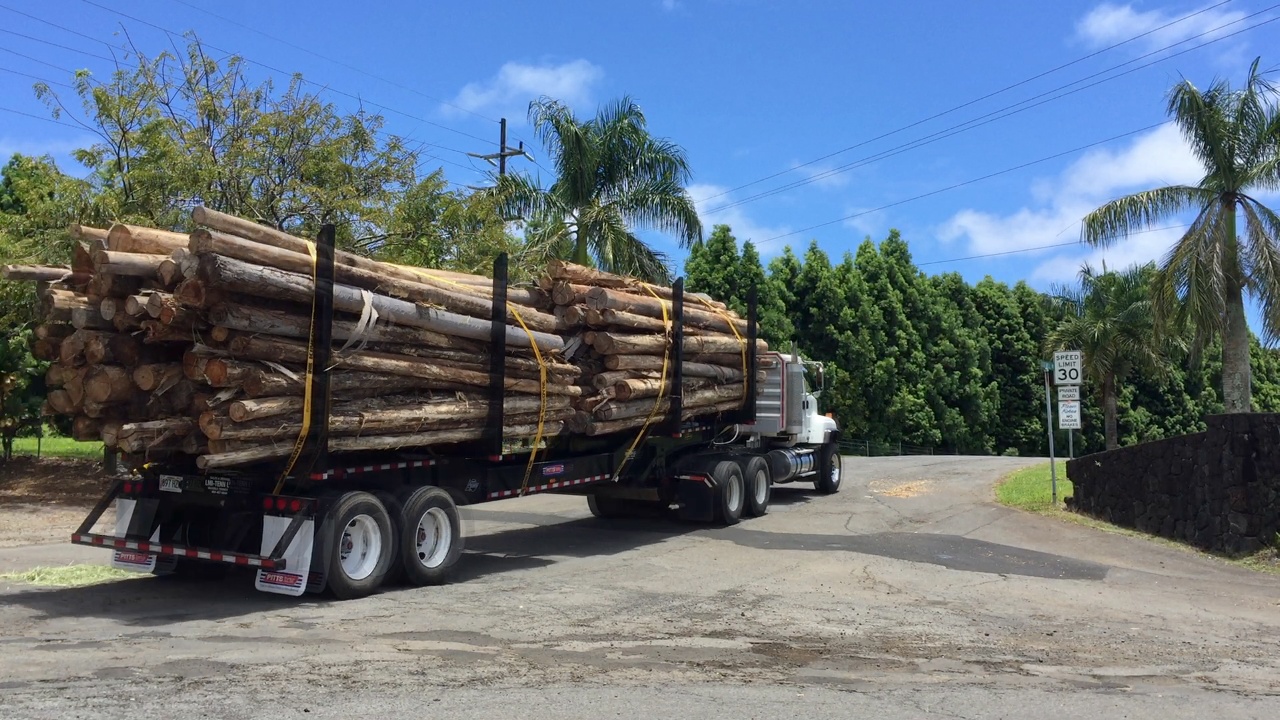 Logs were already being trucked to the Hū Honua facility in Pepeʻekeo when the Supreme Court issued its ruling, further delaying the project, (image from video by David Corrigan)

The Hawaiʻi PUC is moving forward with the docket, and in the month of September the commission received an influx of public comments, written in support of Hū Honua.

“I support Hu Honua Bioenergy and what they have done for our families, our community, the Big Island, and the environment,” wrote Kanui Iopa on September 12, for example. “Hu Honua has already hired 35 plus operations and maintenance workers, including myself, with the expectation that the facility would have been operational by now. All of our employees are all locally hired from the Big Island and are committed to providing clean, renewable energy for all.”

Henry Curtis, the Executive Director of Life of the Land, made note of the public comments coming in to the PUC.

“Submitting comments that will have zero impact is a way of letting off steam, of sending a message that will not be read, that can`t be read by decision-makers,” wrote Curtis on his Ililani Media website. “Each entity has a legal right to cross-examine witnesses in opposition. A third party email sent to the Commission can`t be cross-examined. It can’t be part of the official record. It can’t influence the outcome,” he wrote.

In its initial brief, Life of the Land pulled no punches in describing Hū Honua’s conduct.

“Hu Honua has cloacked itself behind a wall of obstructionism for too long,” the filing states. “Hu Honua’s hubris, its disdain for public disclosure of relevant facts, its contempt for those seeking to understand the unintended consequences of the project, its arrogance, must give way to a scientific, legal, and moral evaluation of whether the proposed project is reasonable and in the public interest.”

The PUC recently set a procedural schedule for the docket, starting with the filing deadline for the greenhouse gas emissions analyses on October 21.

As Hū Honua wrestles with the permitting process, the biomass company is also working to win over the community living in the neighborhood surrounding the power plant.

At the Peepekeo Community Basketball Court, under a blazing sun, 23 Honua Ola Bioenergy plant workers and office staff put up six new nets, repainted the lines on the court, and removed grass and dirt to restore the popular court to proper playing condition. 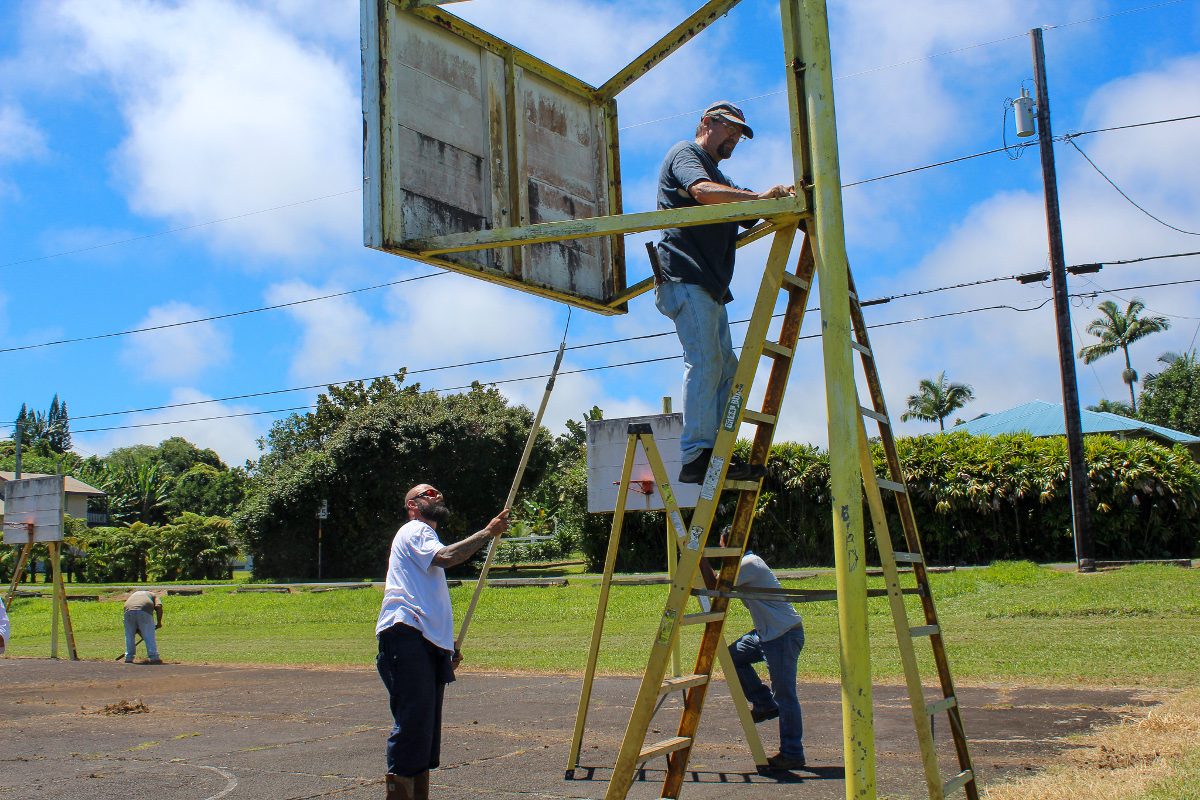 A pastor, from a nearby Assembly of God whose Sunday school kids will continue to frequently use the court, handed juice to volunteers to show her appreciation. She later asked Lowen Moses, the Honua Ola worker who led the restoration effort, why they were there?

“I was jogging, and noticed kids were playing with no nets. When my nephew visits home from college, he always asks me to play basketball with him. There are many families out here, like ours, that grew up on basketball, and it makes a difference if the court is in good shape,” replied Lowen.

Lowen got the word out at Honua Ola, prompting the plant manager and fellow workers to get involved in the project. Honua Ola donated the supplies to complete the restoration and collaborated with the Department of Parks and Recreation, under the program Friends of the Park to cut the grass near the court and provide a clean and safe environment. 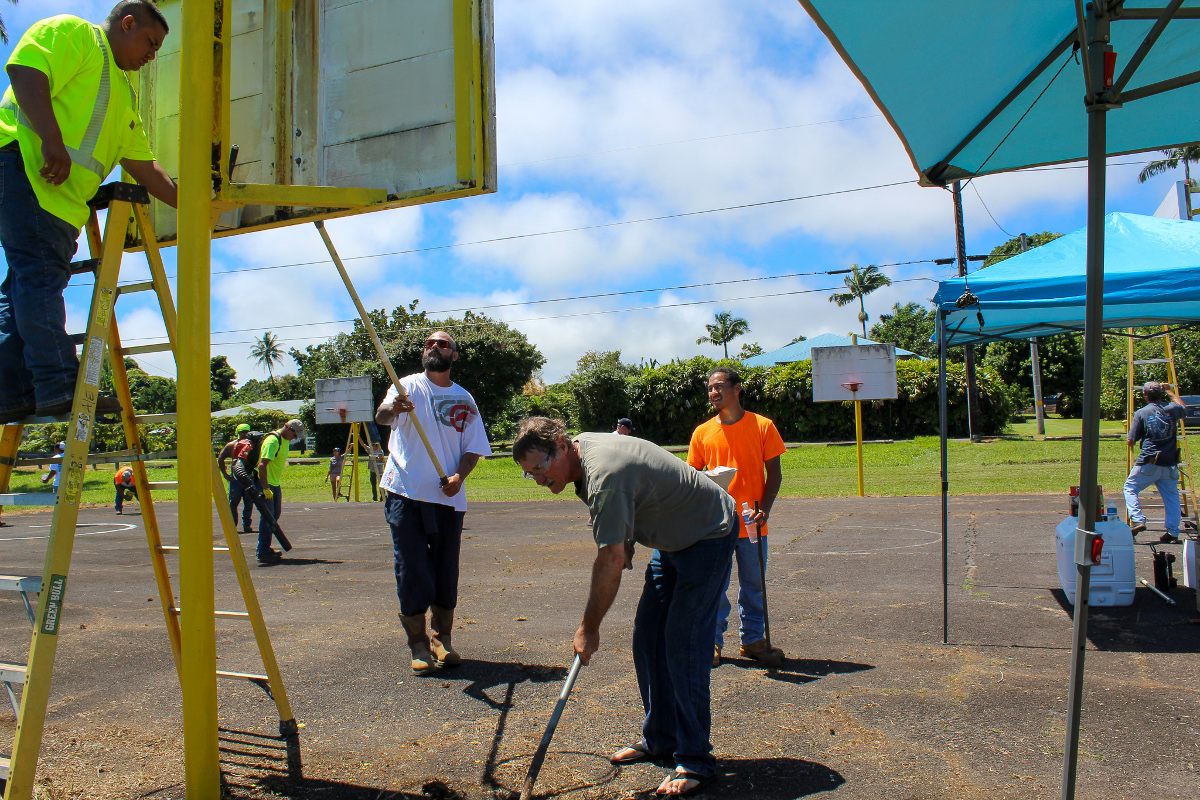 Honua Ola has been involved in the community for many years, providing sponsorships and volunteer time to local clubs, organizations, schools, sports teams and various causes, part of their commitment to being a good neighbor and an environmental steward. 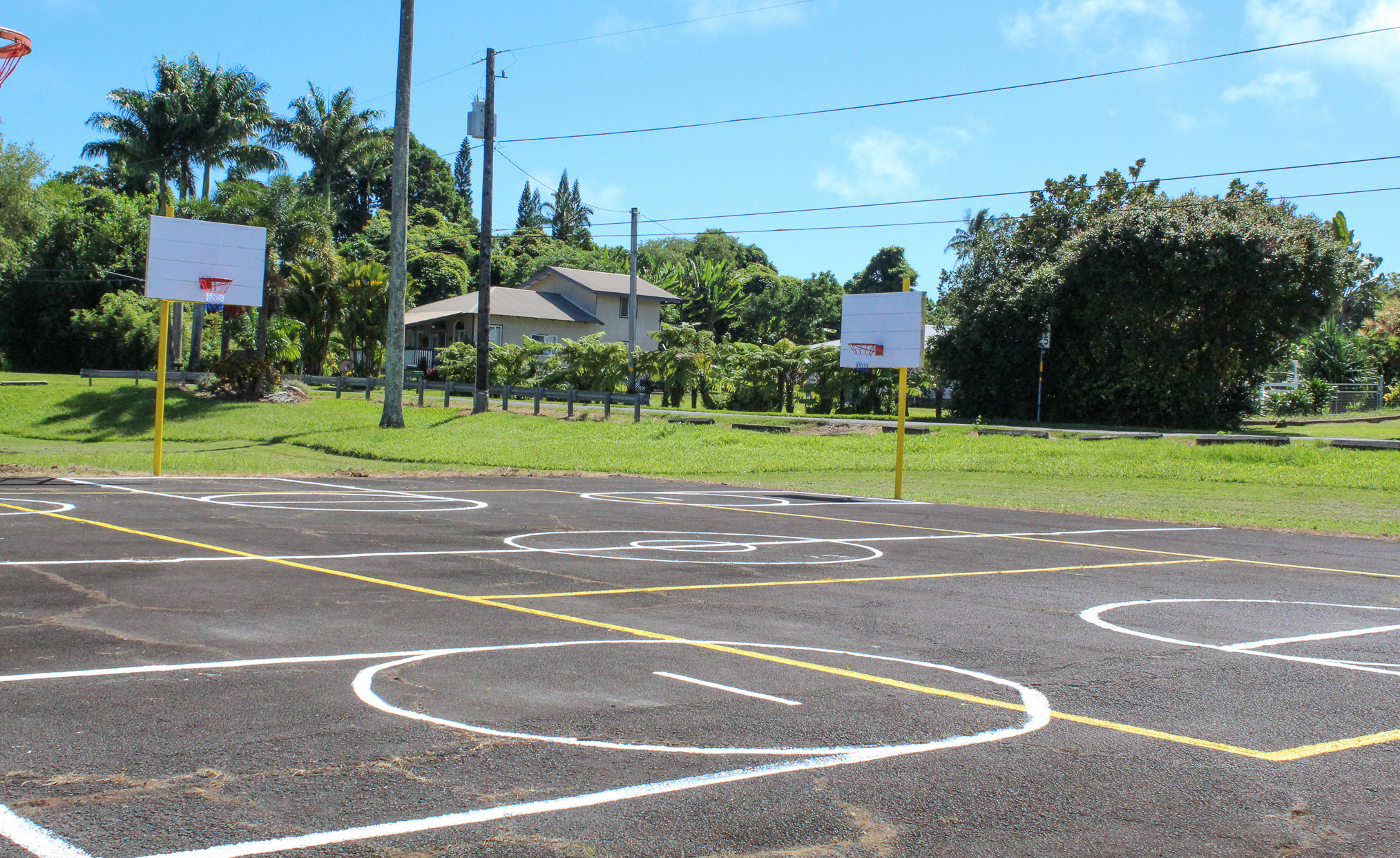