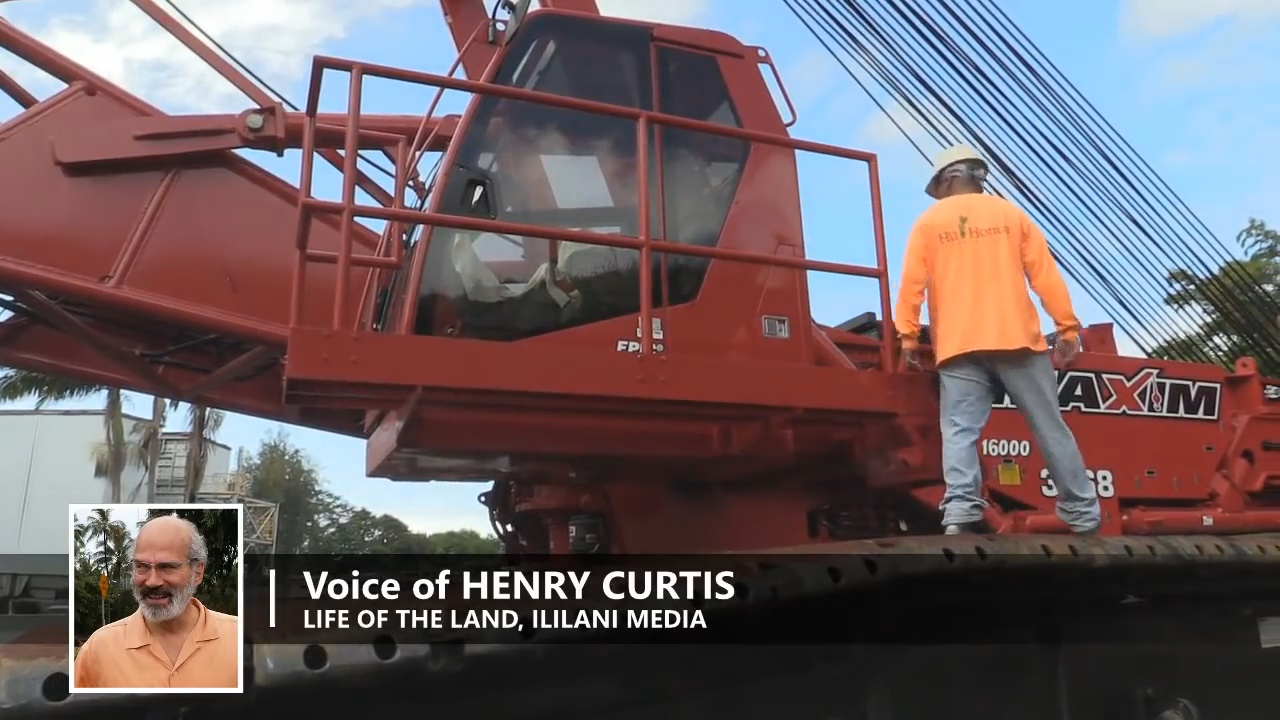 Image from May 2017 video by Big Island Video News

PEPEEKEO, Hawaii - Life of The Land is challenging the Public Utilities Commission ruling in favor of the HELCO-Hu Honua biomass power purchase agreement.

(BIVN) – The HELCO-Hu Honua biomass power purchase agreement is being appealed to the Hawaii Supreme Court. According to Life of the Land, the non-profit environmental and community action group, it will be the first challenge by a Public Utilities Commission docket participant “regarding climate change and greenhouse gas emissions in Hawai`i.”

The agreement, which was recently approved by the Hawaii PUC, will bring the old Pepeekeo power plant back to life as a biomass facility, once Hu Honua finishes work on the power plant.

“It is critical that state regulatory agencies consider climate change,” asserted Henry Curtis, Executive Director of Life of the Land, which participated in the Hu Honua docket. “And, the PUC is specifically required by law to do so,” Curtis added in this media release:

Since 2011, the PUC has been expressly mandated by state law (Act 109 SLH 2011) to consider greenhouse gas emissions in their decision-making but has continued to totally disregard its duties under the law.

Life of the Land believes that the total lack of any analysis let alone any mention of greenhouse gas emissions in the final decision of the Commission was grave error compounded by the PUC’s categorical dismissal of Life of the Land’s attempts to raise these issues. Life of the Land is asking that the Hawaii Supreme Court vacate the PUC’s decision and direct it to properly consider all issues required by law.

This failure is even more troubling in light of more recent enactment of Act 32 (SLH 2017): “The legislature finds that not only is climate change real, but it is the overriding challenge of the 21st century and one of the priority issues of the senate. Climate change poses immediate and long-term threats to the State’s economy, sustainability, security, and way of life.”

Life of the Land is Hawai`iʻs own energy and environmental group working to protect the people and the `aina since 1970. Our mission is to preserve and protect the life of the land through research, education, advocacy, and when necessary, litigation.

Life of the Land is represented by Maui attorney Lance D. Collins.

We interviewed Curtis by phone in May, before the PUC rendered its decision.


Henry Curtis provided insights on the Hu Honua – HELCO Deal in a phone interview that was published in May 2017.